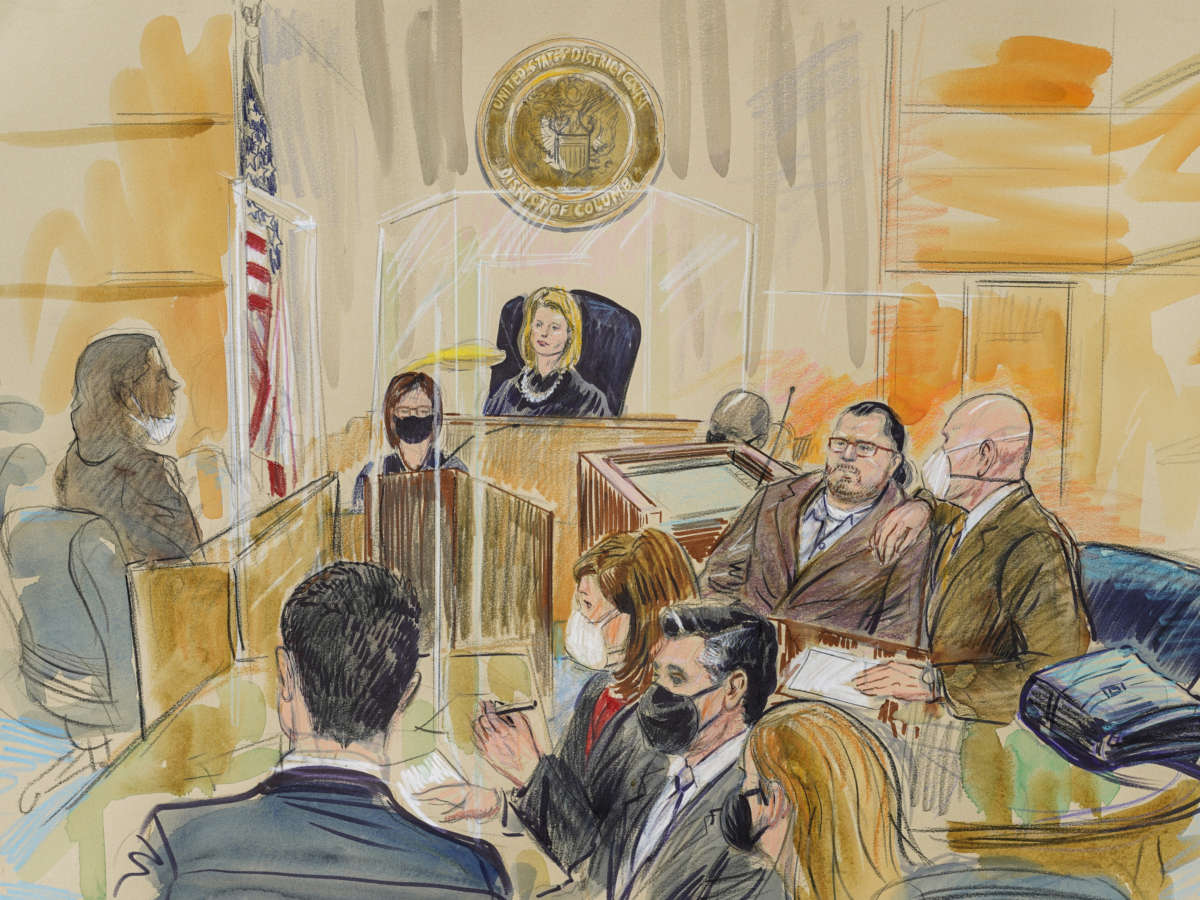 This artist sketch depicts Judge Dabney Friedrich looking out from the bench during proceedings in the trial against Guy Wesley Reffitt, joined by his lawyer William Welch, top right, in federal court in Washington.
Image credit: Dana Verkourteren

For the first time, federal prosecutors on Wednesday presented a jury with the case against an alleged participant in the pro-Trump riot that overwhelmed the U.S. Capitol on Jan. 6, 2021, and disrupted the peaceful transfer of power to President Biden. Jurors also heard testimony from two people who served with the U.S. Capitol Police that day, including one longtime member of the force, who became emotional recalling the violence.

Assistant U.S. Attorney Jeff Nestler told the Washington, D.C., jury that the riot that day was the worst assault on the Capitol since the War of 1812.

“A mob needs leaders,” Nestler said, and pointed to the defendant, Guy Wesley Reffitt of Texas, as one of those leaders.

The government accused Reffitt of being part of an antigovernment militia known as the Texas Three Percenters, and alleged that he brought firearms to Washington in advance of the riot, bringing a holstered pistol with him as he joined the mob outside the Capitol. Nestler said Reffitt riled up the crowd with violent language, charged toward police guarding the Capitol building, and only turned back after Capitol Police sprayed him with a chemical spray. Later, according to prosecutors, he threatened his children if they turned him into the FBI, saying “traitors get shot.” The government plans to call two of Reffitt’s children as witnesses, including his son, who turned Reffitt in to the FBI and provided audio recordings of his father to law enforcement.

Of more than 750 people facing charges related to the Capitol riot, 220 have already pleaded guilty, and more than 100 have been sentenced.

On Wednesday, a member of the antigovernment group the Oath Keepers agreed to plead guilty to seditious conspiracy and obstruction of an official proceeding. That defendant, Joshua James, agreed to cooperate with law enforcement and prosecutors, who are also pursuing a case against Oath Keeper founder Stewart Rhodes.

Reffitt, however, is the first defendant to go to trial, where jurors will weigh the evidence and arguments from the government, as well as Reffitt’s defense attorney, William Welch.

In some respects, Reffitt’s differs from many of the other Capitol riot cases. The government does not accuse him of entering the Capitol building or of assaulting police. Welch pointed to both of those facts during his own opening statement, in which he said the government’s case was based on “hype.”

Prosecutors said that they intend to introduce extensive audio and video evidence to the jury of Reffitt’s actions during the Capitol riot, including recordings of Reffitt saying, “We’re taking the Capitol before the day is over, ripping them out by their hair, every f****** one of them.”

Nestler apologized to the jury as he quoted curse words from Reffitt’s alleged comments.

“I just want to see Pelosi’s head hitting every f****** stair on the way out, and Mitch McConnell, too,” Reffitt said, according to Nestler.

“The defendant dressed for battle,” Nestler said, with a bulletproof vest, a helmet outfitted with camera, flex-cuffs and a holstered handgun. He said that Reffitt played a leading role in the rioters’ approach to the Capitol, calling him the “tip of this mob’s spear.”

U.S. Capitol Police, Nestler said, were able to eventually push Reffitt back in the crowd using less-than-lethal chemical sprays, but Reffitt’s actions “showed the mob the way,” and they ultimately overtook the building.

Nestler said Reffitt’s son Jackson made the “wrenching decision” to tip off the FBI about his father’s plan to go to the Capitol on Jan. 6, and cooperated with law enforcement. Jackson Reffitt is set to testify later in the trial.

In his opening statement, Nestler spoke loudly and deliberately and removed his mask to address the jury, who sat spaced far apart and masked in the largely empty courtroom still abiding by COVID-19 protocols. The jury of 16 people (including four alternate jurors) appeared largely attentive, with several actively taking notes.

Reffitt’s wife, Nicole, was the only member of his family allowed in the courtroom due to those pandemic-related restrictions. She showed little outward reaction to the prosecution’s opening statement, even as Nestler discussed her husband’s alleged threats against her children. In interviews with media, Nicole Reffitt has said she remains supportive of her husband and has described how this case has torn apart her family. She has said that her husband’s alleged threats were not serious.

After the prosecution laid out their case for about 30 minutes, defense attorney Welch gave his own opening statement. Welch kept his mask on during his presentation, spoke much more softly, and wrapped up after approximately three minutes.

“The evidence will show that this case was a rush to judgment,” Welch said, “based on a lot of hype.”

Welch did not appear to dispute Reffitt’s violent language. “Guy does brag, he exaggerates, and he rants,” said Welch.

Welch did challenge, however, a key fact alleged by the prosecution:

Reffitt “was not armed,” Welch said. It is a dispute that the jury will have to evaluate over the course of the trial.

After opening statements, the prosecution’s first witness to testify was Shauni Kerkhoff, who was working with the Civil Disturbance Unit of the U.S. Capitol Police during the riot.

The crowd was “angry and violent” and extended “as far as I could see,” she testified. “They were calling us ‘traitors.’ ”

The prosecution played a recording of Kerkhoff calling for backup over the radio. Kerkhoff described her own voice on the recording as “panicked.”

Kerkhoff said she recognized Reffitt from that crowd on Jan. 6, and described how he ascended a stairway outside the Capitol building backed by the mob. She testified that Reffitt appeared to be “leading the crowd up.”

Eventually, Kerkhoff testified, Reffitt was hit with enough spray that he turned back and tried to flush out his eyes with a water bottle. Other rioters, however, pushed past the police line, and would breach the building itself.

Nestler, the prosecutor, asked Kerkhoff about whether she considered using her firearm, which she had on her during the riot. “I assumed that people in this crowd were armed,” Kerkhoff responded, and said she was reluctant to use her own firearm because it could lead to a “shootout,” killing multiple people.

Kerkhoff did testify that she did not see any indication that Reffitt was armed, though she said she did not have a view of his right hip, where his holster allegedly was.

Finally on Wednesday, Capitol Police Inspector Monique Moore testified and narrated what happened as Nestler showed exhibits of surveillance videos and other images from that day.

Moore was in the Capitol Police command center on Jan. 6, and as people began breaching the area around the building, Moore testified, she contacted the local Metropolitan Police Department, U.S. Secret Service, U.S. Park Police and the FBI.

Moore said she was in “disbelief,” and had to take a moment to gather herself and Nestler handed her a tissue to wipe the tears from her eyes.

She said in 24 years with the department, she had never seen anything like the events that day.

“It was hard to hear officers scream on the radio — scream for help,” she said.

Testimony in the trial is expected to continue through early next week.