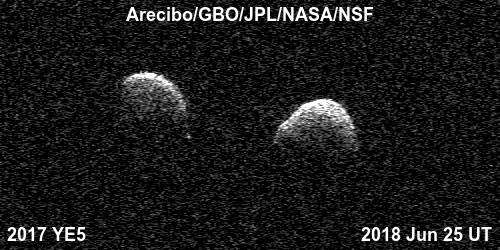 Bi-static radar images of the binary asteroid 2017 YE5 from the Arecibo Observatory and the Green Bank Observatory on June 25. The observations show that the asteroid consists of two separate objects in orbit around each other.

With over 30,000 known asteroids out in space, it’s no surprise that planetary scientists like to be on the safe side by studying them and tracking any potential threats we might face if one happens to come our way.

Thursday marks World Asteroid Day, a campaign sanctioned by the U.N. to help raise awareness for the planetary threats—and learning opportunities—that asteroids have for people here on Earth.

“We are the point of civilization that we are the first species that could actually prevent natural disaster,” Luisa Fernanda Zambrano is one of the planetary scientists that dedicates herself to keeping an eye out for these celestial bodies. “If we know ahead of time that the asteroid is coming, we could deflect it.”

In order to deflect asteroids on a collision course with the Earth’s, it’s essential for scientists to know what they’re made of so we can knock them back into space, said Zambrano. What the space rock is made of and how fast it’s rotating play into how scientists may correct the orbit of these asteroids and alter their paths away from the planet.

Zambrano is part of a team at the Arecibo Observatory in Puerto Rico. In 2019, the team spotted a previously undiscovered asteroid zooming towards Earth and made precise calculations of its orbit and potential composition.

“Arecibo has three research groups: space atmospheric sciences, astronomy, and planetary radar. So we were the only group with whose instruments we had to do it by hand,” Zambrano said. “We were literally moving cables to change the frequency and attenuate the signal with buttons, and we have to calculate all of this.”

After Arecibo’s observatory telescope collapsed in 2020, the scientists have turned to using the data that was gathered over the past four decades to inform their studies. But Arecibo isn’t the only asteroid research hub that is facing setbacks.

NASA’s asteroid-hunting space telescope NEO Surveyor has had $130 million dollars cut from the budget of its mission—before it has even left the ground. Casey Dreier, chief advocate and senior policy advisor for The Planetary Society, is one of the people urging Congress to restore funding to this critical mission.

“NEO Surveyor is, in a sense, the keystone of any good planetary defense against asteroid impacts,” Dreier said. “It’s designed specifically to find these and it’s designed to find them fast, so it would find asteroids that are city-killer size—140 meters and larger.”

Dreier said that around 90% of the largest asteroids with the potential of causing mass extinction have been found. NEO Surveyor works to locate the mid-size asteroids that would do a significant amount of damage in the event of a collision. These smaller ones are hard to find “because it’s like looking for charcoal briquettes in a dark room,” Dreier said.

To overcome that, the telescope uses infrared technology to look for the heat signatures they give off from reflected sunlight. This technology only works for telescopes in space because the Earth’s atmosphere absorbs infrared, so funding for this space-based telescope is all the more essential. The launch was originally anticipated for 2026, but now with a proposed decrease in funding, the project faces some detrimental setbacks.

“It slows everything down and increases the costs, and meanwhile we’re not looking for these things,” Dreier said. “We have our ground-based telescopes, but we’re delaying this process of rapidly finding near-Earth asteroids by a number of years.”

While the price tag for NEO Surveyor checks out at a cool half of a billion dollars, Dreier says that this is a small price to pay to allow this telescope to protect our planet from catastrophic collisions.

“You’re throwing the dice and most of the time that’s fine, it’s a low risk,” Dreier said. “But the consequences of being wrong are extremely high.”