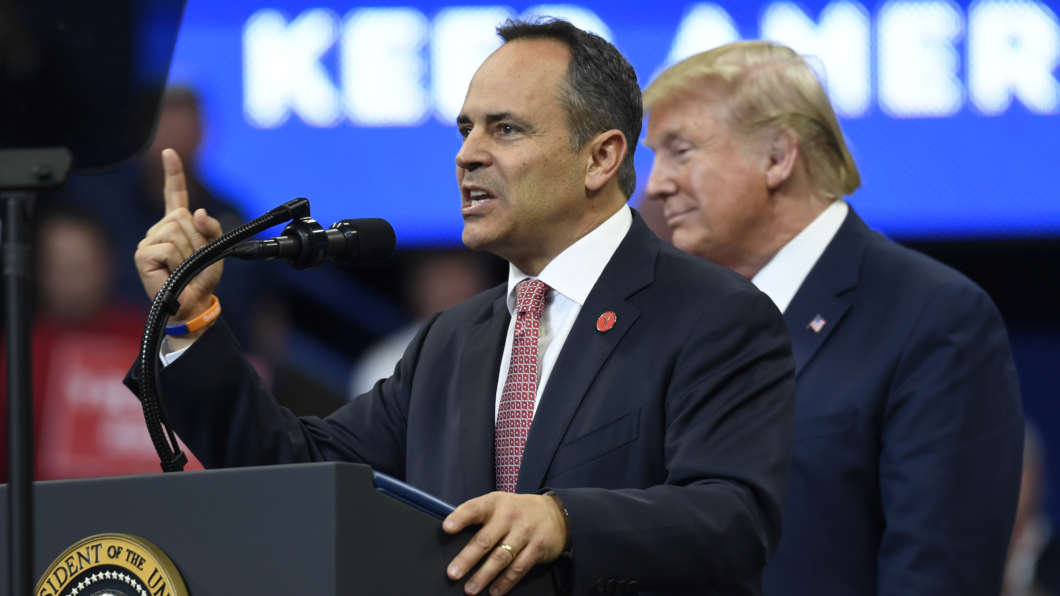 Voters in four states head to the polls today. These off-year contests may not be as high profile as the 2020 presidential and congressional elections will be a year from now, but they could offer some important hints on how voters are feeling about President Trump, impeachment, guns and more.

The main action is happening in three states: Kentucky, Mississippi and Virginia. The first two have gubernatorial races where Democrats have a chance to pull off upsets in states that went heavily for Trump. State-level contests have been the one place where voters have been willing to split with their party — choosing someone to manage state affairs may feel different to voters than choosing a representative to send to D.C. or picking a president.

But in the hyper-partisan era of Trump, that may no longer be possible. Republicans are feeling better about both contests for governor given the congressional impeachment inquiry, which some believe may bring wayward GOP voters back into the fold — much like the Kavanaugh hearings did for Republican Senate candidates in 2018. A third governor’s race in Louisiana go to runoffs on Saturday, Nov. 16, where moderate Democratic Gov. John Bel Edwards is trying to hold on.

In Virginia — a onetime swing state that is becoming more blue with every election — Democrats have a chance to flip both the House of Delegates and the state Senate.

Here’s what to watch in the key races on Tuesday night:

Republican Gov. Matt Bevin has the ignominious distinction of being named one of the most unpopular governors in America. His low approval ratings — stemming from feuds he’s picked with public school teachers, state lawmakers and others — are the biggest reason Bevin is in danger in a state that Trump carried by 30 points. He’s a brash, combative politician — Trumplike before Trump was even president — and that’s alienated even many Republican voters in the red state. Some GOP strategists complain that Bevin has no one to blame but himself for his political peril.

Attorney General Andy Beshear is his Democratic challenger who’s running on returning “Kentucky values” to the commonwealth, as he says in his closing ad — “We treat everyone with respect and we look out for our neighbors. Matt Bevin doesn’t share our values.” Beshear has his own political pedigree that could help him too — his father, Steve Beshear, was a popular governor who preceded Bevin. But while his dad was seen as a folksy, moderate politician, the younger Beshear has had more trouble connecting with voters and isn’t as centrist on as many issues, particularly abortion.

In order to win, Bevin has nationalized his race maybe more than any other GOP candidate on the ballot Tuesday. His ads play up his anti-abortion, anti-illegal immigration stances, his allegiance to Trump and his opposition to impeachment. A recent Mason-Dixon poll in the state, which found the two candidates tied, also showed that 65% of likely voters also oppose impeachment.That, coupled with a Trump election-eve rally, may be enough to carry Bevin over the finish line, no matter how much some voters may personally dislike him.

This is a Republican state at its core. Trump carried it by 18 points, and in a Mason-Dixon poll here the president had a 54% approval rating, along with 56% of voters opposing impeachment. But if one Democrat could pull off an upset, it’s Hood. He’s a pro-gun, anti-abortion centrist Democrat whose ads feature his pickup truck and talk about hunting, fishing and going to church. He supports Medicaid expansion in the state, though, while Reeves opposes that plan.

Reeves is more of a policy wonk who had to overcome his own divisive primary and has worked to tie Hood to the national Democratic party. All those factors could be enough to help Reeves win — along with a Jim Crow-era law that requires a candidate to win a majority of votes and a majority of state legislative districts. If a candidate doesn’t meet both those benchmarks, the race is decided by the state legislature, where Republicans have a supermajority.

There is real doubt that Hood could win a majority of the legislative districts, a mini-electoral college of sorts. But Democrats did get some good news last week as a federal judge wrote he has a “grave concern” that the antiquated law is unconstitutional and could cause “irreparable harm if eventually applied” — a signal perhaps they could intervene if Hood does finish first but falls short of the legislative threshold.

This is likely to be Democrats’ best state of the night, but the question remains whether it will be enough to carry them to a majority in the statehouse for the first time in nearly 25 years. In the House of Delegates, Republicans have a slim 51-48 majority, and in the state Senate it’s only a 20-19 advantage. (Each chamber has a vacant seat).

New court-ordered lines redrawn earlier this year in the House also helped Democrats. And the possibility of flipping control has drawn celebrities out to campaign, including Alec Baldwin, Kerry Washington and Jason Mraz, who’s written jingles encouraging get out the vote. 2020 hopefuls have also stumped in the state, with former Vice President Joe Biden holding a rally to help Virginia Democrats this weekend.

To underscore just how close the margins are, last time control of the House literally came down to drawing a name out of a bowl after the election was deadlocked; those two candidates are in a rematch tonight.

The shifting suburbs are again the story in the commonwealth, where Democrats flipped three congressional seats one year ago. Now, they could do the same thing in the Northern Virginia, Richmond and the Virginia Beach suburbs. In one race, gun control has become a major issue, as NPR’s Melissa Block profiled, following a mass shooting there in May. A special session to try and address gun control in June was abruptly shut down by GOP legislators, and Democrats think Republicans could now feel the backlash in a state that has had several recent mass shootings.

If Democrats do win control, they have the chance to make those gun reforms happen and further expand Medicaid. They could also raise the state’s minimum wage and pass the ERA — a U.S. constitutional amendment stating that “Equality of rights under the law shall not be denied or abridged by the United States or by any State on account of sex.” The ERA was first proposed in 1923 and later gained steam during the 1970s, but then stalled. Illinois was the 37th state to ratify it last year, and, after failing by one vote earlier this year, a Democratic-controlled Virginia legislature would likely give it the final vote needed.

Republicans, however, hope that scandals among the three top statewide Democratic officials could give voters pause. Gov. Ralph Northam and Attorney General Mark Herring both admitted earlier this year to wearing blackface when they were younger, and two women have accused Lt. Gov. Justin Fairfax of sexual assault, which he denies.