‘It just hits you right in the heart’: Why one Floridian has donated 100 gallons of blood 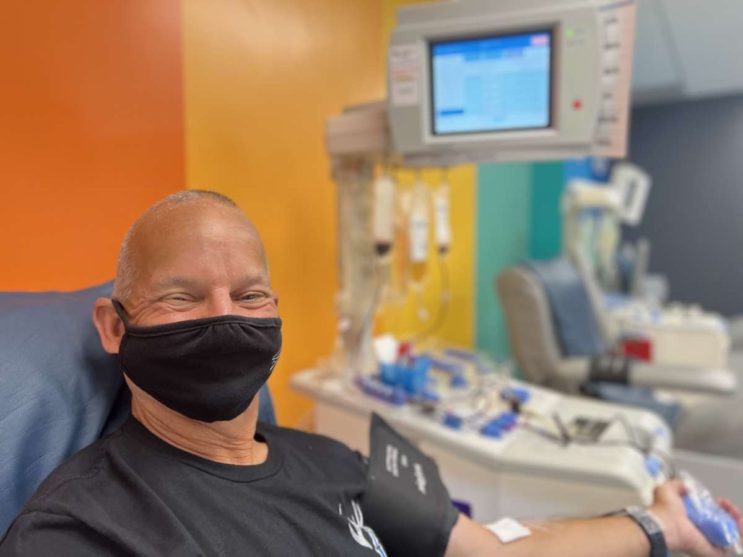 Gerry Hazuka is inside the OneBlood donation center in downtown Orlando, hooked to a clicking and whirring machine harvesting his donated blood, when he asks a question: “You want me to try and set off the alarm?”

He laughs, and the nearby phlebotomists chimes in: “Don’t do that!”

“She’ll come over here and smack me,” he says, and  she laughs too.

Hazuka has a good relationship with the staff at the OneBlood center because he’s there often. He’s been donating since the late 1980s, and recently crossed the 100-gallon donation mark.

Hazuka is among the volunteers WMFE is featuring as part of our holiday series highlighting central Floridians who are making the world better.

He started donating as a road patrol officer at the Orlando Police Department when there was a competition between OPD and the sheriff’s office to see who could donate more. But he got hooked after he met a recipient of platelets: a child with cancer.

“Just seeing the innocence,” Hazuka said. “I worked with kids in the neighborhoods and stuff and coaching and all that. But when you see somebody who is actually sick, on the verge of dying. And then you see that your donations go to help actually save his life. It just hits you right in the heart.”

The blood bank gives stickers showing how many gallons you’ve donated. Hazuka has been collecting them, and has a dresser at home where he’s been lining up the stickers from 89 gallons to 100.

He says everyone should come and see if they’re eligible to donate.

“It’s hard to get people to come in and do this kind of thing because they don’t want to sit and they don’t want to get stuck with a needle,” Hazuka said. “But it’s really an easy process. It’s a worthwhile thing to do. And honestly, getting stuck with the needle is nothing compared to what the people who need the blood are going through.”