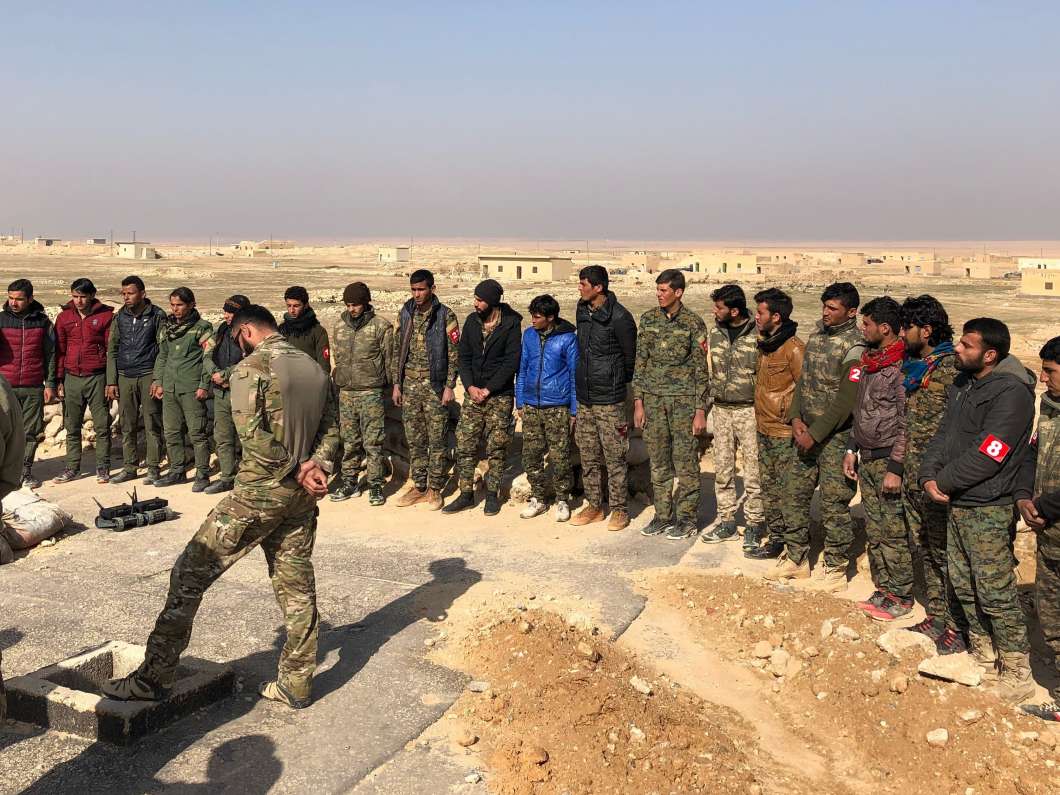 The city of Raqqa was the de facto capital of the Islamic State. ISIS fighters were defeated there back in October, and they scattered in all directions. But they left behind a deadly legacy – thousands upon thousands of explosive booby traps.

Now U.S. and Syrian trainers are teaching young men how to dismantle those bombs, at a village on the outskirts of the city.

In an exercise a Syrian instructor and his young student are trying to do just that. A mock explosive is set inside the metal front door of an abandoned house. They slide a selfie stick with a camera inside the gap in the door, searching for the wire to cut.

Suddenly there’s a sharp beeping sound. That’s not the sound they wanted to hear, says the American special forces trainer.

“We have penalty alarms that you step on and it signifies an explosion,” he explains.

That mock explosion would likely have killed or maimed both men, much like the real explosions that happen daily in Raqqa just down the highway. Some three dozen casualties each week from the thousands of booby trapped doors, chairs, even cooking pots.

And the method is cruelly simple. The bombs are detonated by what looks like a beaded necklace made of fishing line, with small metal discs set inside plastic capsules. When crushed by a foot, the discs come together and complete a circuit, setting off the explosion, says the trainer, who cannot be named for security reasons.

“They blend into just about anything,” he says. “Tile. Rock. Very hard to see and very simple to make and very hard to detect, not a big metal signature.”

Still, a metal signature that could be picked up by sophisticated equipment. But the American and Syrian trainers want their students to use their minds and their eyes first. Scan the ground for something that looks out of place.

“They make a lot of mistakes,” the American says, “but we want them to make them here.”

Nearby some other students are practicing detonating a mock explosive. They place a plastic hook on a wire and then walk backwards, unspooling what looks like kite string. That way they move to a safe distance, and either cut the wire or pull it to detonate the bomb.

Raqqa is laced with such bombs, says Christina, a surgeon with the U.S. special operations forces here, who sees the toll every day.

“It’s people that are trying to go back into their homes whether they’re collecting belongings or trying to move back in to see what’s left,” the surgeon says, “and it’s just devastating.”

Devastating wounds on mostly men, she says, but some women and children, too.

“A lot of lower-extremity wounds, but we see a lot of penetrating head trauma, a lot of chest stuff, abdominal stuff, a lot of traumatic amputations of limbs.”

Not one of the graduates trained here has been a casualty on the job. But most have lost family members to ISIS booby traps, bullets or executions.

One of the students here is Nabeel Mukhil Hamza. He’s a slight 19-year-old, wearing a red parka. He’s from Raqqa, where he was once jailed by ISIS for four days. His crime? Smoking.

“We attend this course of training to protect the civilians and to clear the city of any IEDs and explosives,” he says.

Most of the young men have lost family members to booby traps, bullets or executions at the hands of ISIS.

Hamza says his brother-in-law was killed when he stepped on a landmine. He was just 36 and left behind a wife and young daughter. Hamza says some of his neighbors’ homes are laced with booby traps, one just 40 feet from his house, where he lives with his mother.

“I’m not scared, I’m here for my ultimate goal – safe homes,” he says, though he acknowledges his mother is nervous.

About a 150 young men like Hamza have been trained. But officials here say the threat is so great, hundreds more will be needed.