ISIS Man Who Beheaded Prisoners Identified As Man From London 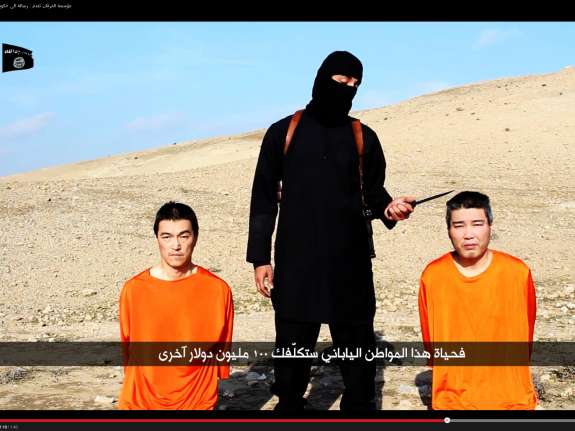 A central figure in videos released by the self-declared Islamic State has been identified as a man from West London. He's seen here dressed in black, threatening Japanese captives Haruna Yukawa (right) and Kenji Goto.

The name of the man who has been recorded in videos threatening and killing several Western hostages in the name of the self-proclaimed Islamic State is Mohammed Emwazi. He is from London and was born in Kuwait.

British security services have been aware of the identity of the militant many have dubbed “Jihadi John,” the BBC says, adding that “they chose not to disclose his name earlier for operational reasons.”

Emwazi’s name was reported by The Washington Post early Thursday, citing interviews with his friends and associates. The newspaper says he is “from a well-to-do family … and graduated from college with a degree in computer programming.”

We’ll update this post as more details come in.

Intelligence sources tell NPR that they can confirm the ISIS figure’s name is Mohammed Emwazi and that he is from London, is college-educated, and has been in Syria since 2012.

Update at 7:35 a.m. ET: No Comment From Prime Minister

Saying “we do not confirm or deny matters relating to the intelligence services,” a spokeswoman for British Prime Minister David Cameron is refusing to comment on the identity of “Jihadi John,” other than to say police and security services are working to bring the hostages’ killers to justice.

The BBC reports, “Emwazi is believed to be an associate of a former UK control order suspect, who travelled to Somalia in 2006 and is allegedly linked to a facilitation and funding network for Somali militant group al-Shabab.”

Emwazi has been a central figure in the grisly ISIS videos in which prisoners have been beheaded and threats have been delivered against the U.S. and other countries.

Dressed all in black with only his eyes and hands exposed, the ISIS figure first attracted notice last August, when he addressed the camera in fluent English before hostage James Foley, a U.S. journalist, was beheaded.

Shortly after Foley’s death, British Ambassador Peter Westmacott said that “we are close” to identifying the central figure in the video.

Since then, the man named today as Emwazi has appeared in more videos in which hostages were killed, including the Britons David Haines and Alan Henning, as well as the Americans Steven Sotloff and Peter Kassig, who changed his first name to Abdul-Rahman during his captivity.

The same man is also believed to be in more recent videos in which two Japanese hostages, Kenji Goto and Haruna Yukawa, were beheaded.