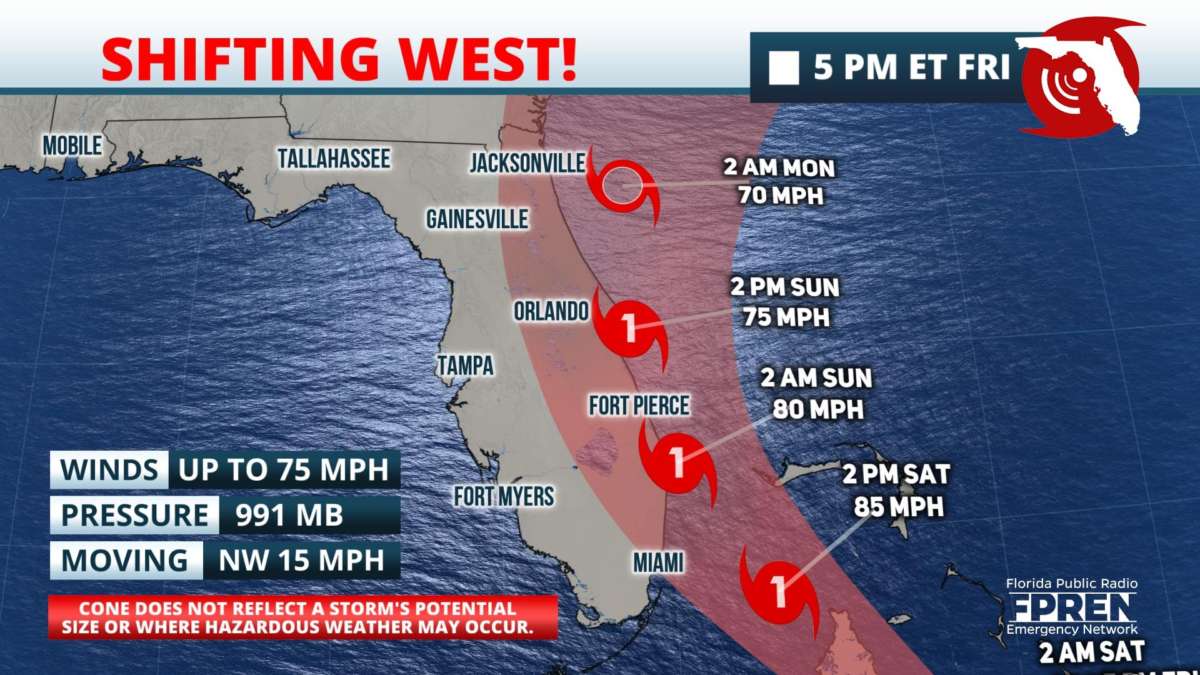 A Hurricane Warning was issued from Boca Raton to the Broward-Volusia County line in anticipation of a more direct impact from Hurricane Isaias this weekend.

Meteorologist Jeff Huffman says newest data is trending toward a closer track to the coast, which would mean greater impacts.

“I would encourage our listeners who live east of I-95 from roughly Boca Raton to Melbourne to prepare for hurricane conditions. And I believe tropical storm force winds could extend inland to areas roughly east of the turnpike to Orlando, then up I-4 and I-95 to Jacksonville,” said Huffman.

A Storm Surge Watch is in effect from Jupiter Inlet to Ponte Vedre Beach as well, where the National Hurricane Center says 2 to 4 feet of inundation is possible.

Huffman said tropical storm force winds will most likely arrive in our area by:

Isaias attained hurricane status early Friday morning and it is poised to make a close pass at the Southeast U.S. coastline this weekend and early next week.

As of the mid-morning Friday advisory from the National Hurricane Center, Hurricane Isaias had top sustained winds of 80 mph. It is moving toward the northwest at about 17 mph. The hurricane is moving through the southeastern Bahamas and will continue to move through the island chain Friday into Friday night.

Tropical Storm Watches were posted from Ocean Reef to Sebastian Inlet, Florida in anticipation of the possibility of tropical storm force conditions on Saturday. The latest forecast track takes the center of Isaias near or just offshore of the Florida east coast this weekend. Southwesterly wind shear was causing the strongest winds and heaviest rain to be displaced to the east of the center of the hurricane based on satellite imagery and reconnaissance aircraft reports. As a result of the lopsided nature of the hurricane and the usual uncertainty in the forecast track, it is not clear whether hurricane conditions will make it to the Florida east coast. However, tropical storm conditions are possible within the watch area as of the Friday morning forecast in anticipation of at least tropical storm force winds this weekend.

Isaias is forecast to turn northward Sunday and Monday near or just offshore of the coasts of Northeast Florida, Georgia, and South Carolina. In its early morning forecast discussion, the Hurricane Center said that there is a risk of surge, heavy rainfall, and strong winds in these areas through early next week, but that it was too soon to determine the magnitude of the impacts because of the uncertainty in the storm’s path. Interests along the entire east coast are encouraged to monitor the progress of forecasts in the coming days, they said.