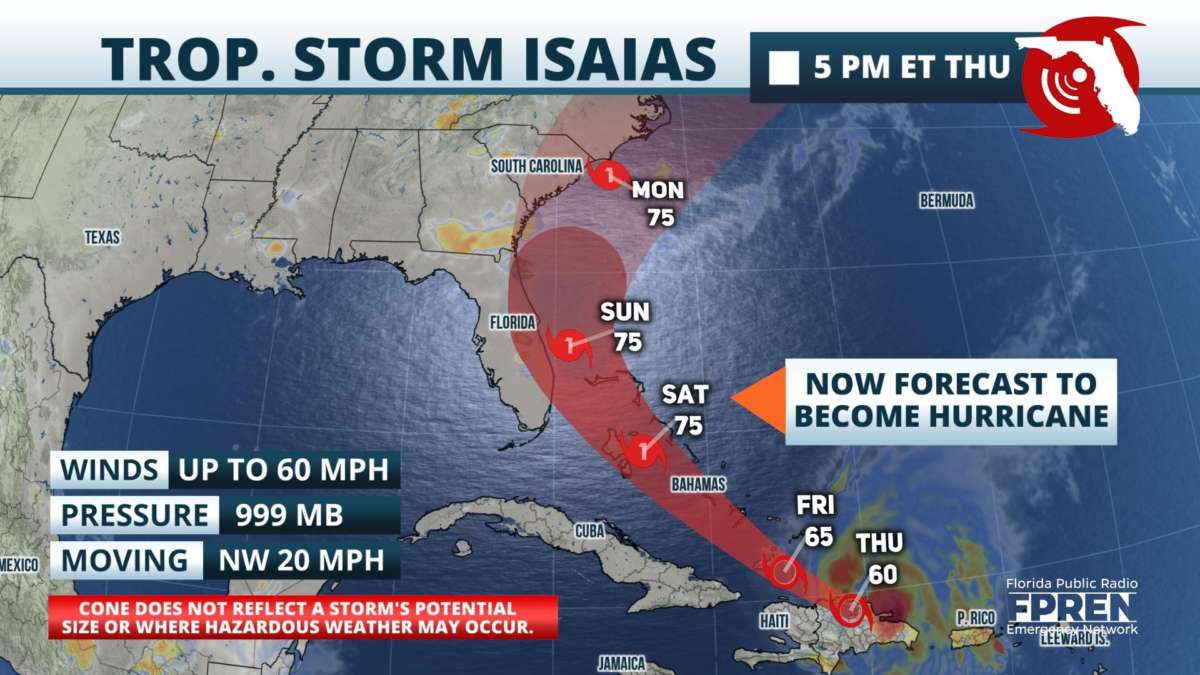 Tropical Storm Isaías is forecast to become a hurricane by the time it approaches the Atlantic Coast of Florida Saturday. A Tropical Storm Watch has been issued from Ocean Reef to Sebastian Inlet, or roughly from Miami to Fort Pierce.

As of 5 pm Thursday, the National Hurricane Center said Tropical Storm Isaías could be strengthening, despite experiencing some interaction with the mountainous island of Hispañiola. Forecasters also noted that the center may be reforming on the north side of island where stronger thunderstorms have formed. As Isaías pulls away from the island, further strengthening is anticipated for at least the next 36 hours.

Isaías is expected to continue moving toward the northwest near 20 mph, exiting Hispaniola and approaching the southwestern Bahamas Friday. A decrease in forward speed is possible Saturday, at which point it would be sitting over very warm waters in the Gulf Stream between Miami and The Bahamas. However, also at this time, there are mixed signals from forecast model simulations on how strong upper-level winds may be. It’s possible that Isaías’ intensification might be slowed or even halted by these winds.

In the National Hurricane Center’s “Key Messages” released Thursday afternoon, Senior Hurricane Specialist Dan Brown said there is a risk of rain, wind and storm surge impacts from Isaías in parts of Florida, but that it was still “too soon to determine the magnitude and location” of those hazards. Even though the newest information suggests the center of the storm would stay offshore, residents from the First Coast to Miami are urged to stay vigilant and monitor the progress of Tropical Storm Isaías.