Isaias Strengthens and May Affect U.S. Coastline This Weekend 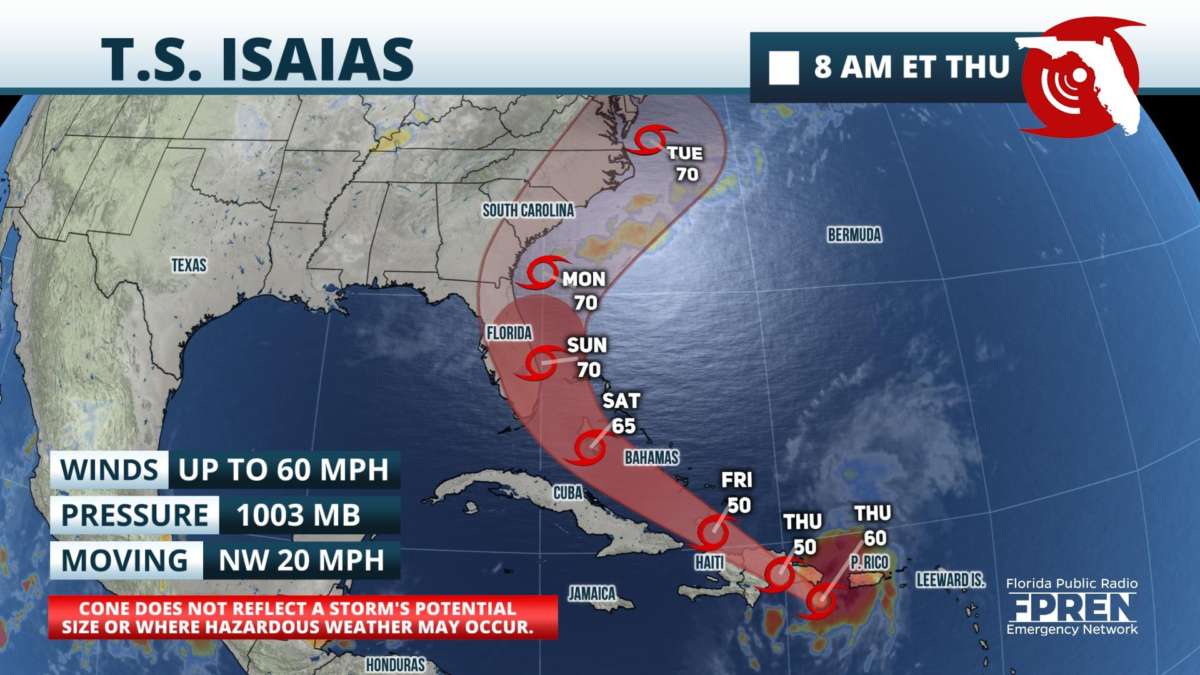 Update Thursday 11 am: Tropical Storm Isaias is just offshore the southeastern shores of the Dominican Republic as of the latest advisory from the National Hurricane Center.

Isaias continues to maintain maximum sustained wind speeds of 60 mph (97 km/h) with no change in intensity as of the latest advisory with a forward motion to the northwest at 20 mph.

Heavy rains and life-threatening flash flooding have been reported from the neighboring island of Puerto Rico where power has been knocked out to thousands of customers.

Tropical storm conditions are likely to continue across Puerto Rico and the U.S. Virgin Islands through Thursday morning with heavy rainfall and flash flooding shifting towards Hispaniola and parts of the Bahamas through Friday at least.

Isaias could bring heavy rainfall and wind impacts to the Sunshine State late Friday and into the weekend but it is still too early to determine the exact location and magnitude of those impacts. Floridians should continue to monitor the progress of Isaias and plan accordingly while listening to their local emergency managers.

Original story as published Thursday morning below this line.

Tropical Storm Isaias became the season’s ninth named tropical storm late Wednesday evening. It may pose a threat to the United States coastline this weekend or early next week, but questions remain about its eventual track.

As of mid-morning Thursday, Isaias had top sustained winds of 60 mph as it moved northwestward near 20 mph about 125 miles west of Ponce, Puerto Rico. The National Hurricane Center said the storm was causing life-threatening flash floods and high winds over the island Thursday morning.

The forecast track takes the tropical storm over the island of Hispaniola today, where there is mountainous terrain that is likely to temporarily disrupt the recent strengthening trend for a brief time. Forecasters say heavy rain is likely to cause flash flooding and mudslides along with the tropical storm force winds over the island today into tonight as it approaches.

Isaias is forecast to reach the southeastern Bahamas late tonight into Friday. Reliable forecast models show two broadly different scenarios that may occur. If the storm remains strong and largely survives the path over Hispaniola, the storm is likely to strengthen and become a strong tropical storm, staying near or just offshore the Florida east coast this weekend. This would result in an increase in seas and rip currents, but the worst of the storm would stay offshore. This path would also increase the threat of more significant impact on Monday in the Carolinas. The Hurricane Center said in their early Thursday morning discussion that there are models that forecast Isaias to reach hurricane intensity, but that there is large uncertainty in the future strength of the storm.

If the storm is generally weaker, steering currents would likely direct Isaias toward the Florida Peninsula with heavy rain, gusty winds, and choppy seas beginning Saturday over South Florida and then spreading northward through the Peninsula on Sunday. A weaker storm would also have potentially fewer impacts in the Carolinas, but some increase in seas and rip currents would remain a distinct possibility with a weaker system.