Is Rooftop Solar Under Threat In Florida? 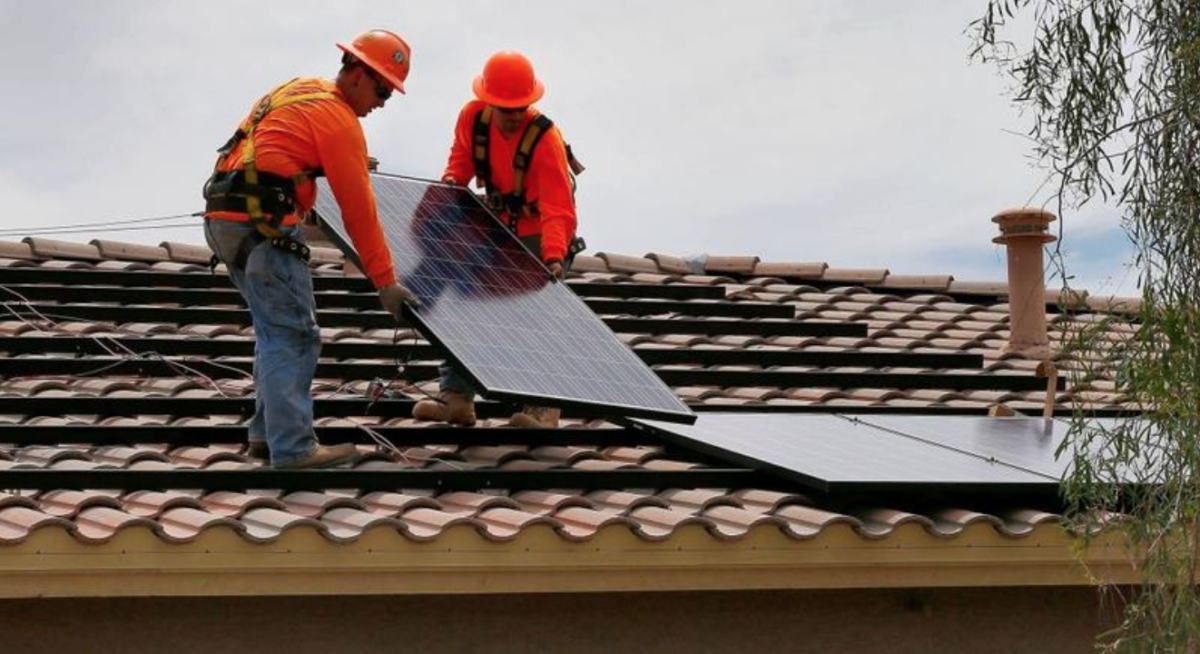 When Pete Wilking founded A1A Solar in Jacksonville in 2010, the rooftop solar industry was still in its infancy. Just three years later, the company was “very financially viable.”

Then Jacksonville’s city-owned utility company changed its rooftop solar policy in 2018, reducing the amount it reimburses solar customers for excess power. That change doubled the amount of time it takes for solar owners to recoup their investment. Demand soured, and Wilking was forced to lay off 25 people, about half of his full time staff.

JEA says it changed the policy to keep regular customers from having to subsidize solar customers.

That’s an argument that has gained political traction around Florida recently, although solar businesses and advocates say the small number of solar owners don’t have the impact utilities claim they do.

“When they’re making disingenuous statements, I think we need to be sure to call that out,” said Alissa Schafer, a communications and research specialist for the Energy and Policy Institute (EPI), a national watchdog organization.

Schafer and others are worried that Florida’s powerful investor-owned utilities are pushing regulators to scale back the state’s rooftop solar policy, as JEA did, or get rid of it all together. If successful, the rooftop solar industry across the Sunshine State could start to look a lot like it does in Jacksonville.

When JEA lowered its net metering reimbursement rate from 10.3 cents per kilowatt hour to 3.25 cents, existing solar owners were grandfathered in. But for new customers, instead of the seven to nine years to recoup their investment on a solar system with a 35-year life, the time increased to about 20 years, said Wilking.

Initially, nearly every home the company built had rooftop solar panels. Thanks to the available 26% federal tax credit, a TerraWise home with solar was less expensive than one without.

“[S]ay adding the solar to your house is going to raise your mortgage by $65. But then you’re going to save $75 a month on your electricity bill. So your payback was virtually immediate,” Director of Operations Jacob Shacter explained. “Mathematically, it just made sense.”

But not after JEA changed its net metering policy.

“We went from basically 100% solar to none overnight,” Shacter said.

JEA, as a city-owned utility whose oversight comes from its board and City Council, didn’t need outside approval for the net metering change. But the state’s investor-owned utilities are regulated by the Florida Public Service Commission (PSC), which sets the policy on net metering.

The PSC reaffirmed the state’s net metering rule in 2019, calling it an “effective” way to promote solar.

Not long after, a freshman legislator asked the commission to review the policy again.

“Low and middle-income families are paying more on their electricity bills than they should so their wealthy neighbors can have solar panels on their rooftops,” Rep. Lawrence McClure (R-Dover) wrote to the group, citing a familiar argument.

In response, the PSC held a workshop in September 2020 to discuss net metering, in which the utilities argued that customers without rooftop solar were subsidizing those who had it.

FILE–In this photo file taken Monday, May 7, 2018, solar panels are seen on the rooftop on a home in a new housing project in Sacramento, Calif. California is the first state in the nation to require homes built in 2020 and later be solar powered. The Building Standards Commission voted unanimously Wednesday, Dec. 5, 2018, to add the energy standards to the state building code. (AP Photo/Rich Pedroncelli, file)

“For the average net metered customer, the subsidy they enjoy is about $75 to $80 per month,” said Terry Deason, representing Florida Power and Light (FPL), Gulf Power Company and Tampa Electric Company (TECO).

He said the utilities project another $700 million in subsidies between 2020 and 2025, assuming rooftop solar adoption continues to grow significantly. While not advocating for a change in net metering at the meeting, he did say “at some point, it needs to be addressed.”

But EPI’s Schafer said those numbers don’t add up.

“The percentage of people that have solar on their business or on their home is so incredibly low, it’s ridiculous to imply that this is causing a cost shift,” she said.

Rooftop solar adoption statewide today is only at .5% or around 60,000 customers. In Jacksonville, the percentage is similar, with 2,106 residential and 104 commercial customers.

A 2017 report from the Lawrence Berkeley National Laboratory at the University of California found the effect of net metering reimbursements on retail prices to be “negligible for the foreseeable future.” New research from Michigan Tech University published this month suggests that homeowners with rooftop solar are actually subsidizing their neighbors who don’t have rooftop solar.

Solar United Neighbors was also impacted by JEA’s net metering change. They had to scrap plans for a rooftop solar cooperative in Jacksonville. A solar cooperative (or co-op) is a group of homeowners who come together to qualify for a bulk discount.

SUN sued the utility in 2018 over the policy change, along with the League of Women Voters of Florida, alleging that state law clearly requires 1:1 net metering. JEA maintained the reimbursement is not specified.

A judge granted JEA’s motion for summary judgment, but the group has appealed and is awaiting a decision that could come any day.

An attorney with Earthjustice, the law firm representing SUN, said there’s more than one way to change the net metering rule.

Alissa Schafer, research and communications specialist at the Energy and Policy Institute.

Alissa Schafer, research and communications specialist at the Energy and Policy Institute.

“If the legislature repealed the net metering requirement, you would see many utilities push for a policy similar to JEA’s, and as a result I think you would see solar installations by customers really plummet as you’re seeing in Jacksonville,” said staff attorney Bradley Marshal.

No legislation has been filed as of yet for the March session, although the deadline isn’t until February 26, 2021. Even if nothing comes out of the legislative session, a policy change could be sought through the PSC.

Advocates also have been following campaign funding closely. EPI’s Schafer worries the flow of money might hint at what’s to come.

During the fall 2020 election cycle in Florida, investor-owned utilities donated more than $9.2 million to candidates and their political committees on both sides of the aisle, according to the EPI.

That’s far more than they’ve paid out to net metering customers since the rule was adopted in 2008, Schafer said.

“Florida utilities, like Florida Power & Light, have spent tens of millions of dollars to craft and preserve a political environment that delivers exactly what the power companies and their investors want, from our city commissions all the way to our legislature and Public Service Commission,” said Schafer.

And advocates like Schafer are watching more than just dollars; they’re also looking at political appointments.

Former legislator Michael La Rosa applied to be a member of the PSC in June and, as The Miami Herald reports, just days later he transferred $50,000 from the political committee he controls, Floridians for Opportunity, to the fund used to elect Republicans to the state Senate — the body that would eventually confirm La Rosa’s appointment to the PSC. He was sworn in as the PSC’s newest member last month.

For most of its 130-year history, the PSC was a three-person elected body. In 1978, it was expanded to a five-member appointed commission. Integrity Florida, a nonprofit research institute and government watchdog, has labeled the PCS a “captured” regulatory agency, meaning state politicians have “considerable influence” on it.

Another notable recent change was at the Office of Public Counsel (OPC), which provides legal representation for residents in utility related matters. As The Tampa Bay Times reported, J.R. Kelly, who was the head of that office for 14 years, was effectively forced out last year when Sen. President Wilton Simpson — a top recipient of utility contributions, with his political committee Jobs For Florida accepting $220,000 — successfully pushed legislation to impose a 12-year term limit on the position.

In the past, the OPC has viewed rooftop solar as an “important part” of Florida’s future energy mix. Kelly himself fell “somewhere in the middle” of current net-metering arguments, meaning he supports reimbursement but not necessarily at the 1:1 ratio solar advocates want.

The position of Kelly’s successor, Richard Gentry, is not yet clear, although he spent the last year lobbying for the utility-backed nonprofit Floridians for Government Accountability.

Utility scale solar is expanding rapidly in Florida and across the country. JEA has installed 8 solar farms over the past decade and has plans to build five more. Once all of those are online, they will produce enough renewable energy to power about 62,000 Jacksonville homes, or about 15% of JEA’s customers.

JEA declined to be interviewed for this article, citing the ongoing litigation, but said in an email they believe utility-scale solar is more cost efficient than rooftop.

But even with that rapid expansion, scientists and environmental activists say it’s not nearly enough to avoid the worst impacts of climate change. So does JEA — which is under new management and a new board after a botched attempt to privatize — plan to reinstate 1:1 reimbursement for net metering customers?

“There are no plans to change the policy as it currently stands because it equitably spreads the associated costs among JEA’s customers (solar and non-solar) dependent upon the electric grid,” said Media Relations Coordinator Simone Garvey-Ewan.

A1A Solar’s Pete Wilking says that Florida’s rapid growth, plus the increase in electric vehicles, means there will be plenty of demand, and it only makes sense to use existing space, like rooftops, for solar expansion. But he’s concerned about his industry’s ability to compete in the political realm.

“Little guys like us, we don’t have big coffers to give massive campaign donations to lawmakers. We just don’t have the resources,” Wilking said. “The biggest problem right now is that utility companies don’t know how to morph their business model to nicely accommodate rooftop solar. That’s where the rub is right now.”

This story was originally posted on adaptflorida.org.