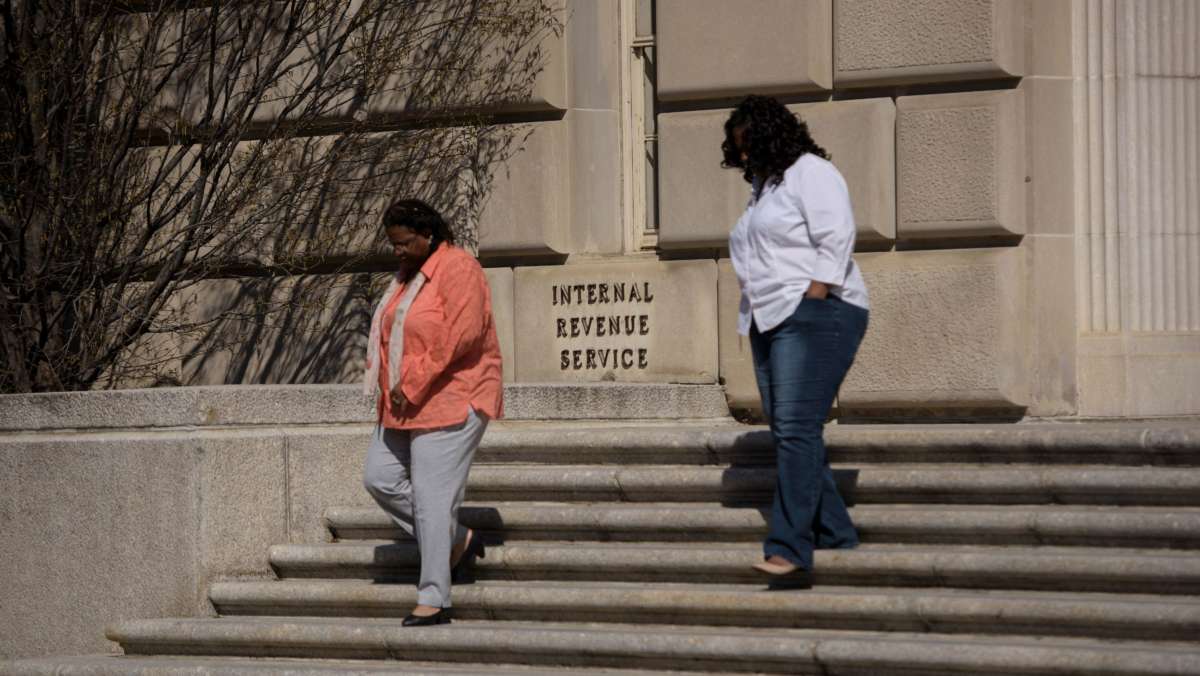 The Internal Revenue Service is under huge pressure to quickly disperse the $1,200 payments promised to most people in the $2.2 trillion coronavirus relief bill. Experts say it could take months for everyone to get checks — with some people possibly waiting until after they file their taxes next year.

Over the past 10 years the IRS budget has been reduced by roughly 20%, leaving the agency with aging technology and forcing it to cut back on staff and training, according to experts. The added stress of the coronavirus is already causing customer service headaches.

“There’s a dearth of people who are qualified to do the work and they’re overworked,” said Mark Everson who served as IRS commissioner from 2003-2007 under President George W. Bush. “If you’re going to get a check in the mail, it could come as late as end of August.”

Treasury Secretary Steven Mnuchin told House Democrats Wednesday that the first round of coronavirus payments will be made by direct deposit next week. Democrats on the House Ways and Means Committee estimate about 60 million people would be eligible for those deposits — a small fraction of the roughly 150 million people the IRS estimates will file taxes this year.

The remaining 90 million, along with millions more would have to wait for deposits in the mail, which takes time. But the headaches don’t stop there.

Some people may have made more than the $99,000 income cap last year, meaning they would miss out on the payments. But, if they lost a job and their income dropped, they’d be eligible and would have to go back to the IRS in 2021 to get their payments.

Everson, who is now vice chairman at the business tax advisory AlliantGroup, says people confused about the payments shouldn’t bother trying to call the IRS to try to figure out what to do.

“I wouldn’t counsel anybody to call in,” Everson said. “You’re not going to get through on the phones.”

The IRS itself agrees. The portion of their site dedicated to coronavirus payments counsels “Do not call” and “check back for updates.”

That reliance on web updates creates another layer of confusion for many low income and older people. Nina Olson, who served from 2001 through last August as the IRS internal watchdog known as the National Taxpayer Advocate, said many of the people without bank information on file also don’t have access to the internet.

Olson says the IRS workforce has been badly depleted through budget cuts and further reduced as the agency tries to comply with CDC mandates for social distancing to help slow the spread of Coronavirus.

“Some of what has hit the cutting room floor is quality taxpayer service,” Olson said. “That is really a problem when you are paying out money to people in a crisis situation where people are already anxious and it could be a matter of life or death for an individual or a business.”

Mnuchin says the IRS is rushing to put together a web portal to allow people to update their bank and personal information so that they can take advantage of the direct deposits. But those aren’t the only questions people have.

Olson says many low income taxpayers and people without bank accounts get their refunds through pre-paid debit cards. Those debit cards likely are no longer active but the account data may still be on file with the IRS. If relief payments go to those cards, those taxpayers will have to go through a process of working that out with the IRS.

The agency says they plan to send people a letter notifying them 15 days after a payment is processed or sent to them. The goal is to confirm that people got the payments, and if they didn’t, give them a chance to reconcile.

Olson and Everson said these coronavirus-specific problems would have been hard for the agency to predict, but there is a lot the agency could have done to prepare for an economic disaster like the one facing the country today if they had the funding to do it.

“There’s been a series of budget reductions and that has depleted the workforce and particularly in the technology area,” Everson said. “The technology, you need to continually invest in that has been really short changed.”

Everson said he worries the strain on the system and rush to issue payments also puts the agency at risk for a data breech.

The current acting Taxpayer Advocate Bridget Roberts released a report in January detailing how the 20% funding reduction over the past decade has led to a 20% reduction in the workforce even as the number of returns filed has increased by 9%.

The IRS has seen its funding increase slightly over the past few years, first in 2018 after Congress approved the Tax Cuts and Jobs Act. But those increases have not made up for cuts that were began in 2013 when the agency was embroiled in a scandal.

Congressional Republicans accused the agency of using ideological targeting to deny non-profit status to organizations the IRS deemed politically conservative. Rep. Jim Jordan, R-Ohio, who helped lead the drive to cut the agency’s funding, said it was a necessary response to the scandal.

“When you have a federal agency with the power and the clout and the ability to impact American citizens’ lives like the IRS has, and you discover that they were targeting people based on their political beliefs, that is frightening,” Jordan said in an interview. “And then coming and asking for more taxpayer dollars, I mean really, that’s just not going to fly.”

Jordan and former congressman and current White House chief of staff Mark Meadows led the conservative House Freedom Caucus during the scandal. They both criticized the agency for bureaucratic failures and mismanagement.

Democrats dismissed the scandal at the time and restored more of the funding when they took control of Congress after the 2018 election. Rep. Lloyd Doggett, D-Texas, who leads the subcommittee that oversees tax issues, said they are playing catch up.

“Republicans assured that the IRS was less capable of doing its work,” Doggett said. “I think it would be great if we could have a bipartisan initiative as a result of this crisis to look at the IRS and try to streamline it, streamline it for this century.”

Jordan would not rule out the possibility of considering future IRS funding increases if the agency can prove that they don’t have enough resources to fully implement the coronavirus legislation. But he remains reluctant to agree to diverting any spending away from direct aid to fund a federal agency.

Doggett, Everson and Olson also raised concerns that the IRS workforce is further depleted by the coronavirus outbreak. A spokesman for the agency said 45,000 of the roughly 80,000 IRS employees are working remotely and thousands more are complying with CDC regulations as they continue to work in offices around the country.

More than 20,000 employees are on temporary leave but an IRS spokesman said the virus won’t impact their ability to get the payments out.

Given all of the challenges, Everson and Olson say fully resolving the payments may take until next year. For now they have some advice: follow the IRS instructions and avoid calling, remember to file your taxes and avoid scams that ask for personal information over the phone. The IRS will never call you and ask you for your information, Everson said.

“Anybody who is not comfortable going online themselves needs to find a friend or relative who can help them through interacting with the service,” Everson said. “If you do hear from the IRS and it really is the IRS, don’t ignore them if they send you a letter.”