Irma Smashes Turks And Caicos; Category 4 Storm On Its Way To Florida 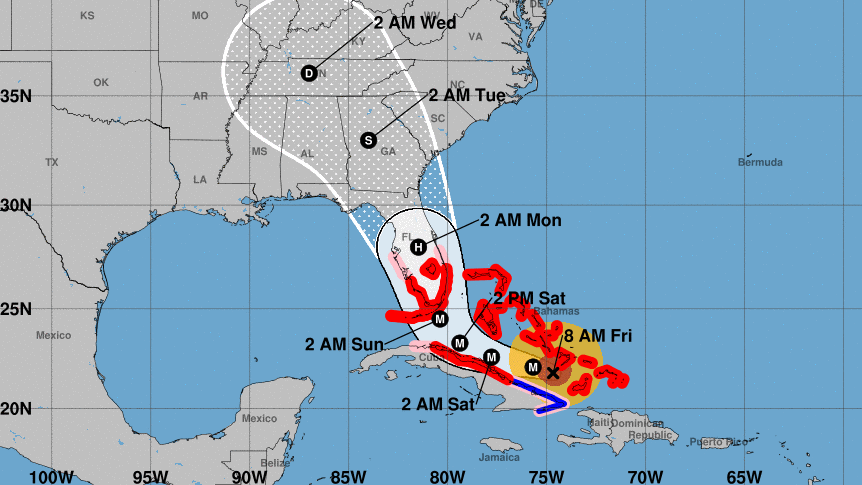 Hurricane Irma is predicted to run up the center of Florida, in the latest track released by the National Hurricane Center at 8 a.m.

Hurricane Irma slammed through the Turks and Caicos Islands en route to a destructive encounter with Florida this weekend. Although the storm has been downgraded slightly, it remains a massively powerful and “extremely dangerous” system, forecasters say.

The extent of the damage to the low-lying Turks and Caicos island chain, located just east of the Bahamas, was not immediately known. Winds at the top end of the hurricane scale and waves as high as 20 feet had been forecast; tropical-force winds will keep hitting the islands through Friday morning.

The National Hurricane Center downgraded Irma a notch from the highest Category 5 ranking to Category 4 in its latest bulletin at 8 a.m. ET. Winds that screamed through the Caribbean at up to 185 mph, turning houses into piles of debris and killing at least 14 people, had fallen to 150 mph, the NHC said.

Meanwhile in Florida, Gov. Rick Scott is expected to order mandatory evacuations for parts of the state’s south on Friday. Residents have been bracing for days for a head-on collision with the massive storm. The first official hurricane warnings have been issued for the southern part of the state.

Irma is a huge storm whose 150-mph winds put it near the upper limit of a Category 4 hurricane on the Saffir-Simpson wind scale. Describing what areas hit by such a storm can expect to experience, the hurricane center says, “Well-built framed homes can sustain severe damage with loss of most of the roof structure and/or some exterior walls. … Most of the area will be uninhabitable for weeks or months.”

At a news briefing early Friday, Federal Emergency Management Agency Administrator Brock Long warned that parts of Florida could be without electricity for days or weeks and that more than 100,000 people in the state may require shelter.

“Hurricane Irma continues to be a threat that is going to devastate the United States in either Florida or some of the southeastern states,” he said.

Hurricane and storm surge warnings of 5 to 10 feet have been issued for a large chunk of Florida’s peninsula, from Jupiter Inlet on the east coast down to the Florida Keys and around to Bonita Beach on the west coast. Hurricane warnings are also in effect for Lake Okeechobee and Florida Bay.

Irma, which is one of the most powerful hurricanes ever recorded in the Atlantic, is set to barrel between the northern coast of Cuba and the southern Bahamas on its way toward Florida.

The storm is sending hurricane-force winds up to 70 miles from its center and extending tropical-storm-force up to 185 miles outward.

Forecasters believe the storm will begin to turn north by Saturday afternoon and make landfall as “at least a Category 4 hurricane” in the Florida Keys by around 2 a.m. Sunday. Earlier this week, the predicted track was for Irma to hug the East Coast, but the latest forecast from the NHC has the storm bisecting Florida as it moves toward Georgia.

“After landfall, a fairly quick decay in maximum winds is expected due to land interaction and increased shear,” the hurricane center says, “although Irma’s large wind field is likely to still produce hurricane-force winds over a large area.”

Referring to the shifting predictions of the storm’s track, Long said, “Anybody from Alabama to North Carolina should be watching this storm very closely.”

On Thursday, Irma skirted past Hispaniola, an island split between the Dominican Republic and Haiti, but the close-pass to the north meant that those countries were spared from the full force of the hurricane’s strongest winds and storm surge.

Earlier, Irma had also passed to the north of Puerto Rico, knocking out electricity to more than a million people in the U.S. territory. The fragile infrastructure on the island is expected to present a major challenge to authorities, who say it could be months before power is restored to some rural areas of Puerto Rico.

Two outlying islands of Puerto Rico, Vieques and Culebra, got hit hardest. NPR’s Jason Beaubien, reporting from San Juan, says those islands got hit “incredibly hard” and that the territory’s Gov. Ricardo Rosselló had declared them a disaster. “People there say the destruction was like the end of the world,” Jason says.

Several other Caribbean islands, including Barbuda, St. Martin/Sint Marteen, Anguilla and the Virgin Islands, were not so lucky. The level of destruction on some has been described as nothing short of apocalyptic. And Hurricane Jose, another major storm coming close on the heels of Irma, is forecast to hit some of the same islands on Saturday before veering north.

The U.S. Consulate General in Curaçao says that it believes about 6,000 Americans are stranded on St. Martin and that it was working with the U.S. and other governments to try to evacuate them.

“We are exploring every possible option to assist U.S. citizens there,” a State Department official tells NPR. “However, there is no U.S. Consulate on the island, and we currently cannot access the island.”

At least four people are dead in the U.S. Virgin Islands, and officials there said they expect to find more bodies. Dozens of patients were evacuated from a destroyed hospital on the main island of St. Thomas to neighboring St. Croix and Puerto Rico. A pair of Air Force C-130s were ferrying in supplies to the stricken islands.

U.S. Virgin Islands Gov. Kenneth Mapp imposed a 6 p.m. curfew, saying the focus is on “making sure people have meals, water and shelter.” He called the magnitude of the storm “very chilling.”

At least one person, a toddler, was killed in Barbuda, where officials said nearly every building was damaged or destroyed.

On severely damaged St. Martin, which is half-governed by France and half by the Netherlands, Dutch forces were helping maintain order and distributing aid, according to The Associated Press.

France’s Interior Minister Gérard Collomb said a total of nine people were confirmed dead on French-administered islands, and another seven were missing. Collomb says supplies and relief workers are being rushed to the area ahead of Jose’s predicted arrival Saturday.

In French St. Martin, there were reports of looting as military planes ferried in police and rescue crews, the AP says.

A massive evacuation of islands in the southeast of the Bahamas chain has also been ordered. The Tourism Ministry in the Bahamas said thousands of tourists have left ahead of Irma’s arrival. The storm has already passed over or near the outer islands of Great Inagua and Mayaguana, but the extent of damage there was not yet clear.

Cuban residents on the northern coast were under a mandatory evacuation order and thousands of tourists were evacuated from low-lying keys off the Cuban coast on Thursday in anticipation of the storm surges, according to the AP.