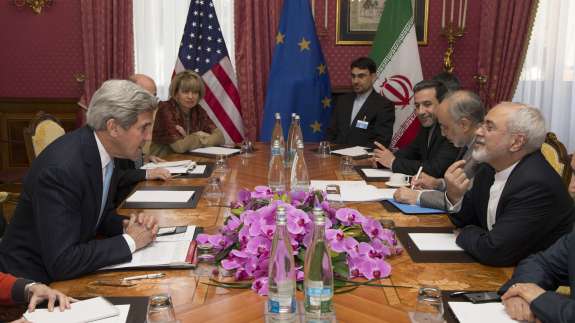 Diplomats seeking the framework of a deal to limit Iran’s nuclear program in exchange for sanctions relief are taking leave of Switzerland — but only for a few days.

“Yes, we are all leaving,” a smiling Iranian Foreign Minister Mohammad Javad Zarif said as he walked past reporters at the luxury Beau Rivage Hotel in Lausanne, site of the 1920s treaty that finally dissolved the Ottoman Empire.

Days and nights of intensive talks on the shore of Lake Geneva brought the sides closer to an understanding of what needs to be in a final nuclear deal, according to U.S., European and Iranian officials. Both sides have reportedly made major, painful concessions compared with their earlier positions.

However, those could all fall away if negotiators can’t reach a full, comprehensive accord.

With just days left before a self-imposed, end-of-month deadline to announce what the Iranians prefer to call “solutions” and the Americans call a “political understanding,” stubborn gaps remain. Sticking points include the length of an agreement, the amount of nuclear R&D that Iran should be permitted under a deal, and which sanctions will be lifted when, and in response to what action by Iran.

Earlier in the week, Zarif had said, “We’ll stay as long as it’s necessary.” But the death of Iranian President Hassan Rouhani’s mother, whose funeral will be Sunday, provided a reason for both sides to say it’s time for “high-level consultations” back in their respective capitals.

U.S. Secretary of State John Kerry — who said “We’re pushing through some tough issues, but we’re making progress” — will stop in London to brief his British, French and German counterparts. Kerry had a one-on-one meeting with Iran’s atomic energy chief, Ali Akhbar Salehi, near the end of this round of talks in the Swiss city of Lausanne.

Some pressure from Washington was eased when Congress decided to postpone consideration of Iran-related legislation until next month. But critics of this diplomatic effort will be poised to resume their attacks, fueled by concern that the Obama administration team is leaving Iran too much nuclear infrastructure under the proposed accord and that Tehran would likely be much closer to acquiring nuclear weapons capability when the agreement expires.

Officials close to the talks say those kind of complaints should be dealt with when and if a deal is actually agreed to, not used in an attempt to derail it while issues are still being negotiated.

The International Atomic Energy Agency confirms that Iran has continued to abide by its commitments under an interim accord that was negotiated in late 2013 in Geneva. Under that plan, known as the Joint Plan of Action, Iran has:

If the sides can reach an understanding on the major elements of a deal, they will then have three months to draft a final accord — with all technical annexes attached — by July.