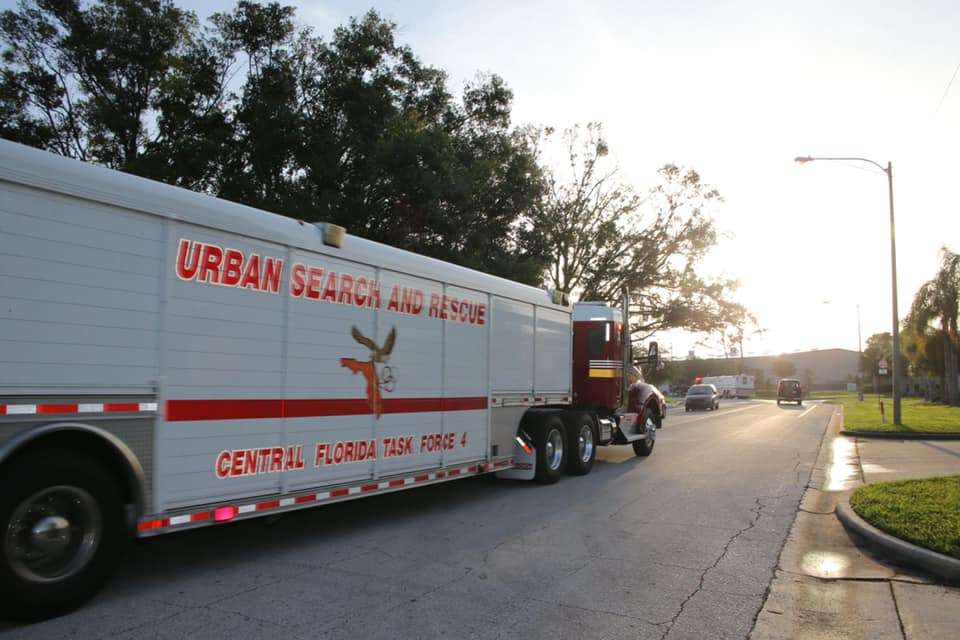 As the convoy traveled toward Baton Rouge, Seminole County Fire Department Lt. Matt Jaynes spoke with me by phone.

WMFE: Lieutenant, thanks for talking with me. Task Force 4 is on a mission on the way to Louisiana. What does the task force consist of?

LT. JAYNES: Well we are, we’re about 40 guys responding with any piece of equipment you can imagine for a natural disaster. So we have technical rescue equipment. We have breaching and breaking equipment for building collapses. And we’re also bringing our cache of swift-water boats, and different personal protective equipment to allow us to enter the water with the different hazards that are associated with it and perform whatever rescues are needed, whether it be high water scenario or finding any live victims in a collapse structure.

WMFE: Now, lieutenant, sort of a basic question. What’s the assistance you’re able to provide after a major storm like Hurricane Ida?

LT. JAYNES: s a task force is to be able to come in and be self-sufficient and not tax any local resources that are already impacted by the storm. So we come in with our own set of shelters. We come in with our own set of tools, our own fuel truck, our own food sources, and we try to eliminate the long-term operations that are overwhelming the 911 system in the area so they can focus on their own homes, their own infrastructure, and we will provide the large wide-area searches, clearing areas of anybody that either chose to stay for clearing and the confirming that they are evacuated. If we have a high-water scenario, some of the places may not be able to support the multiple rescues that could be accomplished via the water, so we’re able to support that with our own boats and personnel.

WMFE: You must have a real team there. You’ve been to so many very difficult situations. Is there a real sense of camaraderie?

LT. JAYNES: Yeah, our team is made up of three of the major fire departments in Central Florida, Seminole County Fire Department, Orange County Fire Rescue, and Orlando Fire Department. And then we have multiple affiliates that form in, and through our training that we do monthly and then our logistic days. … When anybody sees a storm popping up, everybody’s just beating down the door to come down there and prep all the equipment, even if it’s not their month to be deployed out.

So, the guys are all, they know each other, they know each other well. They work well together. They’re all like-minded personnel. They’re all just driven to go work, and sometimes, you know, it’s it’s on some of the senior guys to kind of hold them back and keep them, keep them reined in on what needs to be done in the long-term operation that has to be accomplished.

WMFE: These are 14-day missions. It’s got to take a lot out of you. What drives you to keep doing this difficult job?

LT. JAYNES: I think it’s just a natural drive of all these guys that are just in the fire service as a whole, you know. I mean, they’re in the jobs to do well and help people. … They’re not looking for anything particular. They just, it’s the natural instinct of them all to go out and serve their community, and with us being in Florida, you know, we, we’ve experienced storms we know the impact. So we have them come in and help us, and this is our way of being able to pay that back.

WMFE: Thank you so much Lieutenant for talking with me.