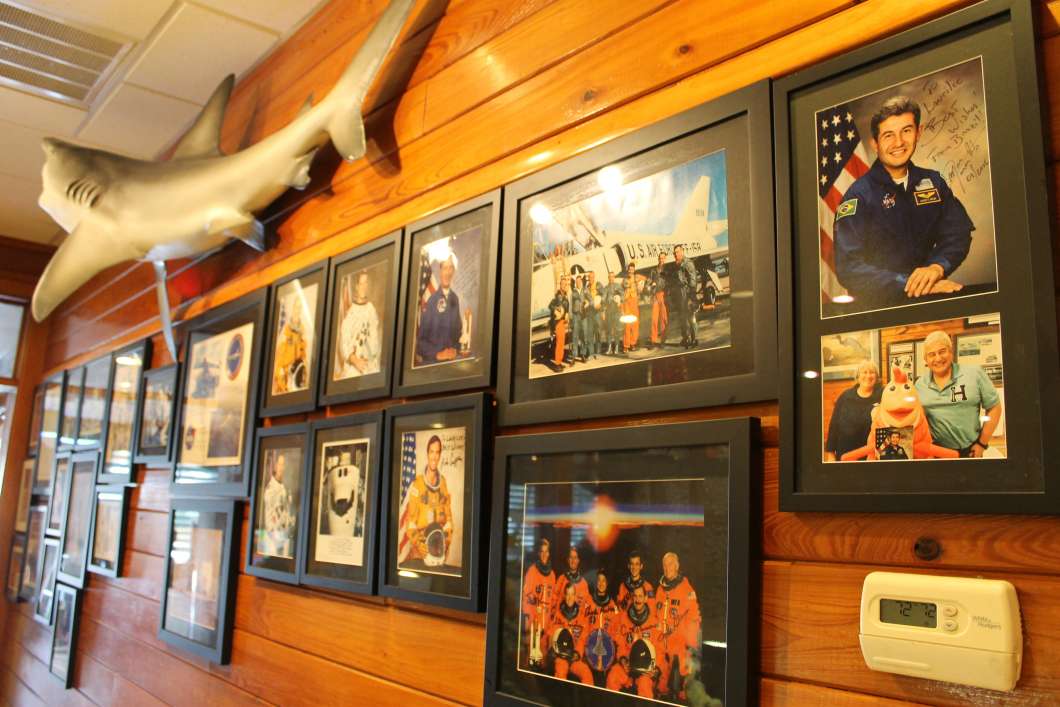 Photographs of astronauts line the restaurant wall at Dixie Crossroads in Titusville, where staff are anticipating a bump in attendance for the Falcon Heavy launch. Photo: Matthew Peddie, WMFE

There’s a buzz around the space coast, where space junkies have made the pilgrimage to watch the launch of Falcon Heavy-  the most powerful rocket in operation.

The earth shaking rumble of the launch will be a throwback to the heyday of the shuttle and even the Saturn V rocket launches during the Apollo program.

At Dixie Crossroads seafood restaurant in Titusville, signs of the space program are everywhere.

The restaurant’s specialty is Rock Shrimp, and General Manager Greg Holladay says the shrimp statue in the entrance way was the mascot for one of NASA’s scientific missions.

“They actually took Mr. Rock with them out to the assembly building and used him as the mascot for the mission,” says Holladay.

One wall of the restaurant is lined with photographs of astronauts, from the Mercury program through to the shuttle program.

Holladay says there are plenty of visitors in town to watch the Falcon Heavy launch.

“You can walk out pretty much anywhere in Titusville, you can feel the ground shake, especially with the heavies, you can really feel it. It’ll rumble the buildings and houses a little bit.

He says one of the best places to watch the rocket launch is from the Indian River Lagoon.

For more on what the launch of Falcon Heavy means for the space program, and for Elon Musk’s space exploration company, we turn to 90.7’s space reporter Brendan Byrne and Dr. Erik Seedhouse, Assistant Professor of Commercial Space Operations at Embry Riddle Aeronautical University.