Intersection: The Art Of The Political Cartoon 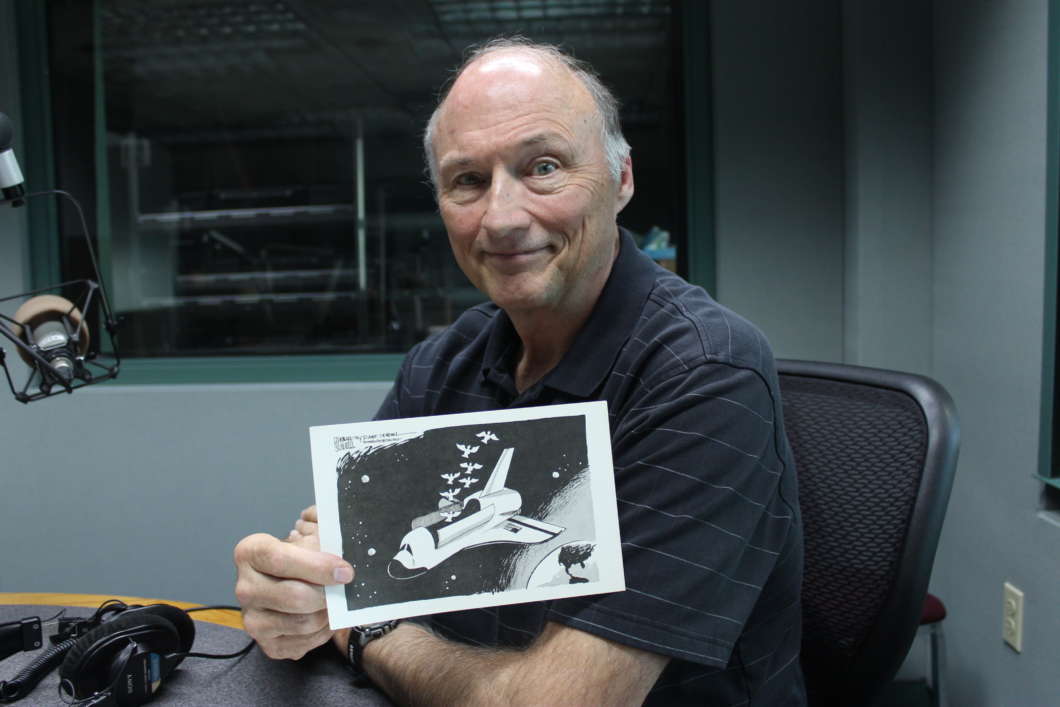 Dana Summers with the cartoon he drew after the Challenger space shuttle disaster in 1986. Photo: Matthew Peddie, WMFE

Editorial cartoonists Andy Marlette and Dana Summers may draw from opposite ends of the political spectrum, but they both cherish the value of the cartoon, whether skewering the mendacity of politicians or illustrating the humanity in a community’s response to tragedy.

The First Amendment Foundation is bringing Marlette and Summers to Orlando this Wednesday for a conversation- Political cartoons in the time of Trump. Marlette and Summers spoke to 90.7’s Matthew Peddie about the art of the cartoon and trying to stay ahead of the news in an era of social media saturation.

“You throw the grenade of the political cartoon out there into the debate, and it can jump right in there with the best of them,” says Marlette who draws cartoons and writes columns for the Pensacola News Journal.

“Being somewhat immature,” says Marlette, “my first idea always to nudity. Partial nudity sometimes gets across, but usually editors frown on full nudity in cartoons, so then you’ve got to up the game a bit and try to incorporate some thoughtful ideas.”

Florida Governor Rick Scott is a frequent target of Marlette’s cartoons. Meanwhile, Summers, who was the Orlando Sentinel editorial cartoonist for 30 years, finds himself returning to the Clintons.

Both cartoonists have tackled serious subjects without the filter of satire. After the Challenger explosion in 1986, Summers says he had a couple hours to come up with a cartoon before the Sentinel went to press.

“This is the kind of thing that you just think, ‘What in the world am I going to do with this'”  he says.

Summers says he wasn’t too happy with the drawing he submitted, but the readers responded.

“They printed up fifteen hundred or so copies, and gave them out to readers. We went to the Space Center. It was a big deal,” he says.

Marlette says that particular image exemplifies the relationship that cartoonists have with readers.

“That’s part of why cartoonists are so valuable to a newspaper,” says Marlette.

“It’s not all about the politics. You’re working with emotions here, and you’re capturing things that just aren’t captured in any other form.”