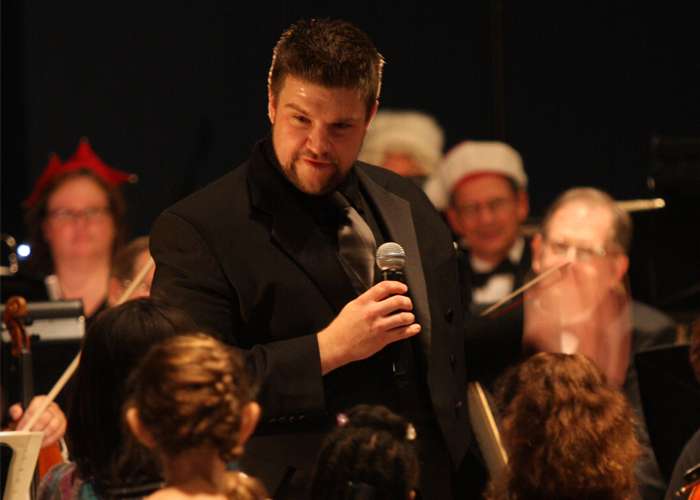 Aaron Collins is the artistic director and conductor of the Space Coast Symphony Orchestra. The orchestra performs about 50 concerts a season, and Collins himself conducts about 250 concerts a year with orchestras around the US. He says the conducting bug started with a movie.

“I was ten years old, and Jurassic Park was coming out. I called my mom, asked her if I could see it- it was PG 13- she said no I couldn’t but I went anyway, snuck into the theater with my friends” says Collins.

Collins was already playing the cello and his family was musical, but he says hearing John Williams theme music in the theater, he knew he wanted to be a musician.

“I just heard Jurassic Park and I was hooked.”

Collins later met Williams, once as a kid after listening to the LA Philharmonic perform his scores at the Hollywood Bowl, and later as a working conductor.

He also struck up a friendship with film score composer Danny Elfman.

“When I was a kid I wrote letters to all my favorite film composers, a hundred, hundred and fifty, hand wrote a bunch of letters. After a while, one or two people wrote back and he was one of them,” he says.

Collins says two days later he flew to LA and met with Elfman, who was recording the soundtrack to Sleepy Hollow at his studio.

Film scores are part of the repertoire of the Space Coast Symphony: this year the theme is the Wild Wild West.

The symphony also has a partnership with NASA, performing both public concerts with a space theme, and concerts just for staff at the Kennedy Space Center. The season ends with a concert called The Cosmos, premiering a work by Orlando based composer Christopher Marshall… and narrated by Sen. Bill Nelson.