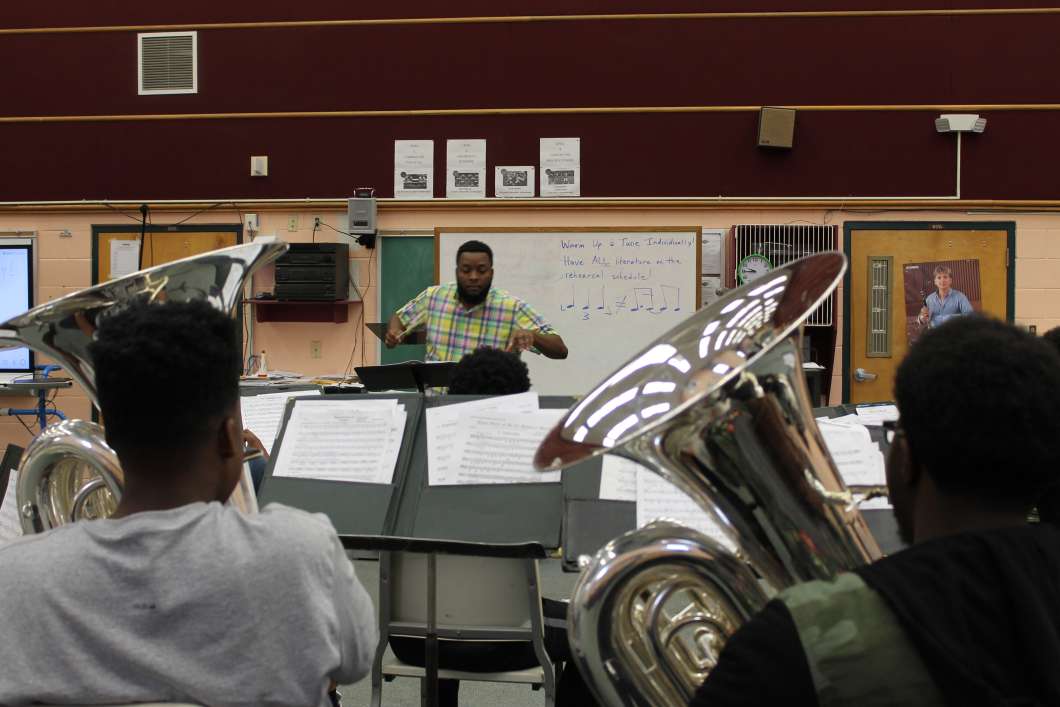 Jamaal Nicholas, Director of Bands at Jones High School, is preparing the school’s marching band for a concert with members of the Orlando Philharmonic Orchestra.

Throughout a two hour rehearsal, Nicholas works hard to get the sound he wants out of the brass ensemble.  Again and again Nicholas comes back to musicality, emphasizing that it’s more than just notes on a page. He tells the students to think of the last note of one piece like a brick dropping onto a flat surface.

“Not a basketball,” says Nicholas.

“Because you don’t want it to come back. The brick stops and the sound travels… you don’t play longer. Can you visualize it?”

“Like a flat basketball?” asks one of the students?

“Whatever ball it is, imagine that it’s not coming back to you,” says Nicholas.

“At their age, and their engagement level, two hours is a long time to sit still and do what we’re doing here,” he says.

“So I do try to include some fun for them, so that it is engaging.”

Nicholas, who is a graduate of Jones High himself and an alumnus of the marching band, says the toughest part of his job is teaching the students musicality.

“Because it’s the one thing that they come without, generally speaking. They come with personality and plenty of it,” he says.

Nicholas says he’s hoping the opportunity to play with the Orlando Philharmonic will inspire some of his students to pursue a career in music.

“Because there are some students who may be on the fence,” says Nicholas.

“When they see these career musicians, who are paid to do what they love, this may be the experience some of these students need to make that decision.”