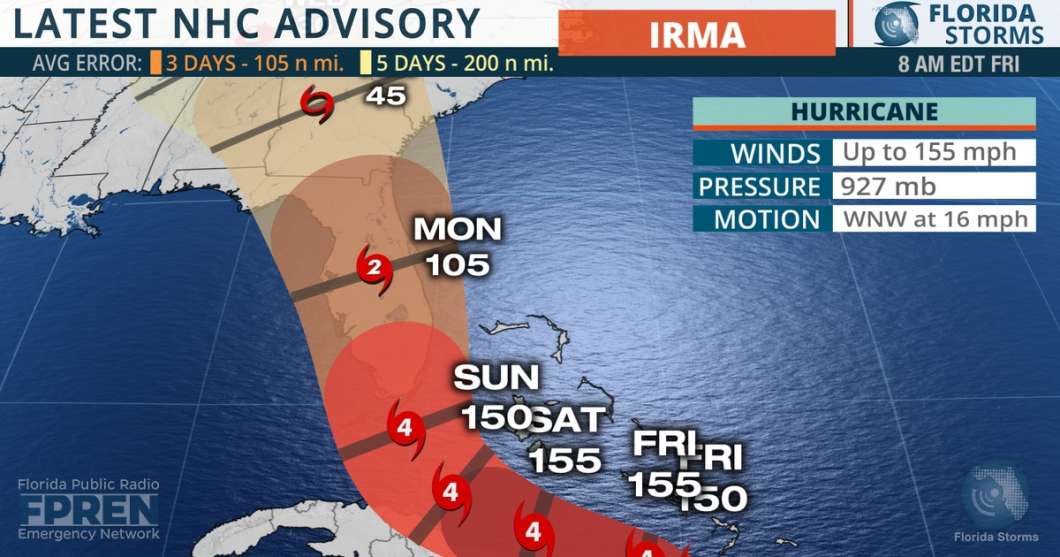 As Hurricane Irma churns toward Florida, are you prepared?

Irma has brought destruction to islands in the Caribbean including Anguilla, Barbuda and St. Martins, and knocked out power to one million people in Puerto Rico.

“You may have noticed some people are kind of freaking out about Irma,” Meteorologist Eric Berger, wrote on the website Ars Technica.

“Although it’s better to prepare than panic, there are some pretty legitimate reasons for extreme concern,” he added.

Berger joined Intersection along with Claire Knox, associate professor of Emergency Management and the Environment at the UCF School of Public Administration, and Seminole County emergency manager Alan Harris to talk about the potential impact of Hurricane Irma.

“In this case it’s still not entirely clear when the storm is going to find the edge of this high pressure and essentially make a north west turn, then turn north a crossed the state,” Berger said.

Harris said Seminole County is looking into opening emergency shelters for people evacuating the coast rather than sitting in traffic to go north.

“In Texas and Louisiana they want people to move up the state,” He said.

“Well for us that clogs every artery that moves north and we are already seeing that now.”

When it comes to hurricanes landfalls it is better to be on the left side of the storm rather than the right, Berger said.

“The left side you typically somewhat reduced winds, less rain, and you are not subjected to the devastating storm surge,” he said.

Knox said the hurricane response for Irma is more proactive than previous hurricanes.

“Unlike Katrina, unlike Rita we’re seeing that there have been a number of policy and planning changes that have happened at the federal, state, and local government levels that are allowing us to be more aggressive,” Knox said.

A list of emergency shelters and evacuation orders can be found at wmfe.org.