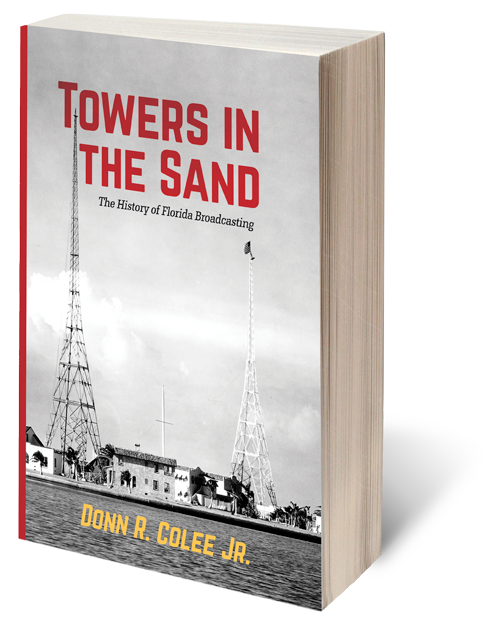 "Towers in the Sand, The History of Florida Broadcasting" by Donn R. Colee Jr.

Donn R. Colee Jr. was just a teenager when he followed his father’s footsteps and started his broadcasting career. Colee says he was “born with a silver microphone in my mouth.” From playing religious tapes on Sunday mornings to spinning rock n’ roll records, he’s seen it all.

“It was a relatively easy transition and rock n’ roll back in the mid-1960s was really just coming to age. It was the beginning of The Beatles invasion,” Colee Jr. says.

Weather coverage has changed since then with the rise of commercial television. Colee Jr. says as a storm approaches “the more people rely on their local radio and television stations.” Following a storm’s turmoil, he says the local stations are the ones that let people know what to do next.

“In the aftermath of the storm, all of the network trucks pack up their gear and they head back to wherever the next disaster is,” Colee Jr. says.

He wrote in his book, “Towers in the Sand, The History of Florida Broadcasting,” about Channel 9 and Joseph Brechner’s role in combating the Ku Klux Klan’s presence in Orlando. Colee Jr. says when Brechner came to Orlando, he realized he was in “a small, southern town. A segregated town.”

“Joe Brechner approached Bob Carr, who was the mayor of Orlando at the time, and helped convince Mayor Carr that Orlando needed to take a leadership role in this,” Colee Jr. says.

Colee Jr. says that “the end result was Orlando peacefully integrated” at a time “other southern cities were facing tremendous violence and riots.”

“It was a tremendous example of the power of a local broadcaster who had the courage to stand up for what was right.”