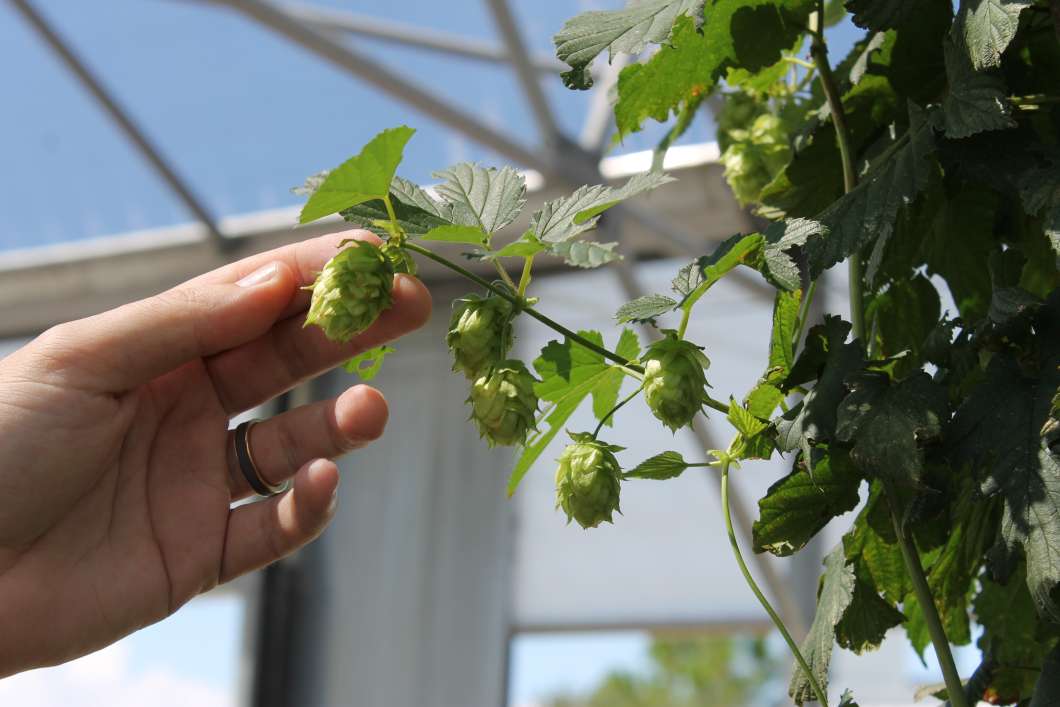 Hops are what give beers like IPA their characteristic flavor. Photo: Matthew Peddie, WMFE

Brian Pearson’s research into hops grew from a personal interest in beer, and a curiosity about whether hops would grow in the Sunshine State. Now the University of Florida professor has brewers and farmers beating a path to his door.

We visited the hop yard where Pearson and two of his students, Richard Smith and Amanda Morgan, are cultivating a plant that could be an alternative to the state’s struggling citrus crops.

“In 2012, I was a home brewer trying to replicate a beer that I’d had at a pub in London, England,” said Pearson.

“Finding out that I could not get that beer as it wasn’t exported to the US, I decided to start a new hobby of home brewing. Within six to nine months I realized just how important hops were to beer as far as coloring it, both in terms of bitterness and flavors and the aromas,” he said.

Pearson said he first planted some hops at the University of Florida site in Apopka just to see how they would grow in the Florida climate.

He said his director was supportive of the idea, but “he recommended I grow them a little bit out of the way to not give the impression that we were doing beer research.”

Now a grant has helped them expand the trial to 375 hop plants.

“Dr. Pearson kind of allowed me to experience beer in a whole new way,” said Smith, adding before he started working with hops he was drinking “run of the mill beer.”

“I had known about hops before, but I always heard you could not grow the hops in Florida, so when [Pearson] mentioned it in class, I got pretty excited and asked if I could participate in the research.”

“It has gone beyond our expectations,” he said.

Amanda Morgan is working with Florida native plants to try and help keep pests under control.

“The idea there is we can attract some of the beneficial native insects closer to the hops or things that might get rid of the pests we’ve been seeing on the hops plants,” said Morgan.

“We get spider mites, mealy bugs, aphids. We get the whole book thrown at us.”

Under the leaves of the hop cone is something called lupulin, which is what gives IPA beer its flavor.

“It’s a rather sticky, resinous substance that will get on your hands,” said Pearson.

“For those beer lovers, you’ll smell that for the the rest of the day, making it very hard to do research,” said Pearson.

“I receive several calls and emails every day asking questions about hops from cultivation to their use to pest management and everything in between,” he said.

“What was perhaps a bit surprising to me was how many of the calls came from citrus producers, people that were producing citrus and are having problems with citrus greening, a major problem in our state right now,” said Pearson.

Pearson said he and his team have established that hops can be grown in Florida. The next question is whether it’s an economically feasible crop.

Hops may not be a “silver bullet,” said Pearson, but he hopes that at least they can help farmers diversify their crops.