Intersection: Getting To The Bottom Of Sinkholes 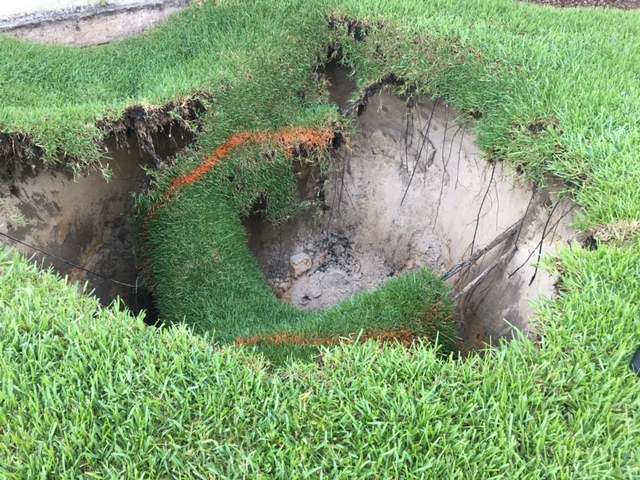 A sinkhole in Pasco County that swallowed two homes has grown to more than 230 feet across and 50 feet deep. It’s one of the largest sinkholes in Pasco County in decades, and could threaten still more homes.

County officials are trying to figure out what to do with the sinkhole once it’s cleaned up. One option is connecting it to a nearby lake.

Meanwhile a 20 foot wide sinkhole appeared between two houses in the Villages this week, prompting evacuations.

So what is it that makes Florida prone to sinkholes? How predictable are they, and what do you do if a sinkhole opens up on your street, or on your property? How do you clean up, and what does insurance cover?

Doug Fudge, insurance agent at Fudge & Associates, Keith Kotch, assistant manager with the Orange County Office of emergency management, and Manoj Chopra, professor of engineering at UCF joined Intersection to talk about sinkholes and what to do when they happen.

Chopra said that Florida is prone to sinkholes because of its geology.

“We have this layer of rock that is very cracked, it’s limestone, and with the interaction with water it tends to dissolve and crack further,” he said.

One of Orlando’s most famous sinkholes opened up in Winter Park in 1981, what is now Lake Rose.
“There was a Porsche dealership there,” said Kotch.

“I don’t think they recovered all of them, so if anybody wanted to dive into that lake, you might find a Porsche.”

Kotch said that when a sinkhole opens up, the biggest concern is keeping people safe.

“You want to get people out of harm’s way, another thing is the environmental impact with the collapse of ground you may have septic tanks or sewer lines that are compromised that may contaminate ground water,” Kotch said.

When someone thinks a sinkhole is on their property Chopra said to contact the water management district, the county, or even an engineering crew can help and investigate the issue.

Fudge said he’s been fielding plenty of questions about sinkholes after the recent news coverage.

“We always get inquiries from our clients, checking their policies, making sure they’re covered,” he said.

“We have a lot of foreign nationals that have properties here, that live overseas, a lot of people in the U.K. and that’s one of their biggest questions.”