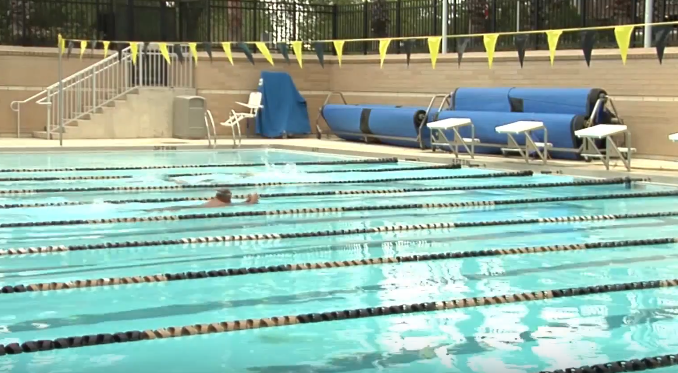 Adam Farner jumps in the pool for a rescue. Courtesy: Courteney Jacobazzi

Lifeguards at the University of Central Florida are tested at random to make sure they’re always prepared for a drowning situation. Lisa Hedlund, Coordinator for Facilities and Aquatics at UCF, said being uneducated about how the water effects you can influence the risk of drowning. She also said that more than just swimmers of a young age are likely to drown.

“There’s also the pocket of swimmers who can be exhausted and swim too much and have potential to have a black out in the water because they don’t get enough oxygen,” said Hedlund. “There are populations that are maybe older who are tired and don’t spend as much time in the water and they overestimate their ability in the water.”

She said the key to prevent drowning is to watch everyone when around water.

Adam Farner has been a lifeguard at UCF for two years and agrees with Hedlund about safety near the water.

“Stay vigilant because things can go wrong at any time,” said Farner.

Farner fell in love with how rewarding being a lifeguard can be and said it makes him feel like a hero.

“My first couple weeks here I was involved in a rescue of a small child and he wasn’t in too much danger, but just being able to be there for somebody was very rewarding in itself,” said Farner.

Farner said they train as a group every month. However, lifeguards are also tested alone periodically to ensure they know their skills.

“And just like I was saying for my rescue before, you’re never really, you can be prepared but you’re not always necessarily ready for when things go wrong,” said Farner.