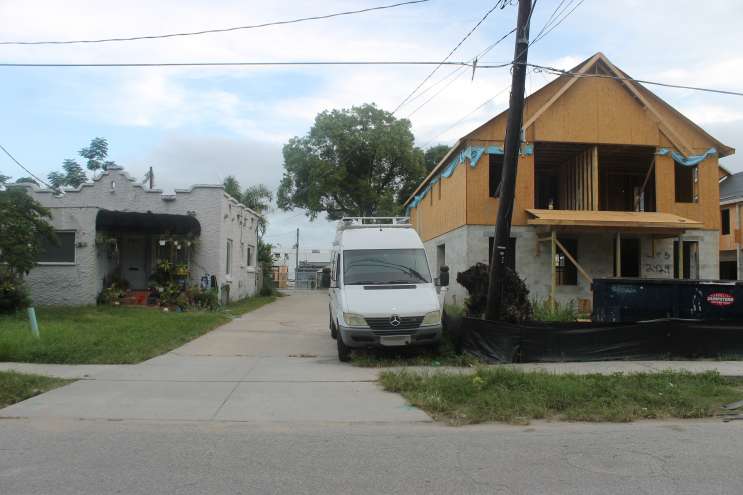 Developer Adam Wonus is building duplexes and triplexes on about 25 lots in the Milk District. Photo: Matthew Peddie, WMFE

Adam Wonus is an Orlando developer who’s been busy buying properties in the Milk District in downtown Orlando and building new homes to rent out.

Wonus said he got the idea for how he wanted to see the Milk District develop after living in the neighborhood for three years. He’s bought about 25 properties, over half of which he said were vacant lots, and the rest of which had city liens against them.

“When I lived in the area, when I would run up and down the streets, I would see these houses that nobody wanted and the fascia was falling off, the building was dilapidated,” he said.

“The plan has never been and will never be to demolish existing houses and take residents out of their homes, and that has not happened to date.”

The homes he’s built rent for $2000 a month, but Wonus said they are more affordable than other downtown rentals.

“If you want to be in downtown Orlando, this is probably the best market to be in from a price per square foot standpoint,” he said.

Wonus said he’d like to work with residents who are already living in the neighborhood to improve the streets.

“If people want to have trees and landscaping, I would even look to donate some of my landscaping crews to help residents in the community that want a change, I’m all for it, I’d love to make a donation to make that happen,” he said.

“Anytime you can walk in a neighborhood, your value goes up,” he said.

“It’s much better to have money coming in than going out,” said Stephenson, but cities also need to be aware of how the new buildings mesh with the character of the old buildings.

And, he said, new development has an effect on the residents already in the neighborhood.

“When the development goes in, what about the existing neighbors, not just in terms of design, but can they afford to live there?” said Stephenson.

“The issue is how well can the government formulate a response to that, because ultimately they’re the ones that control how the land is used.”