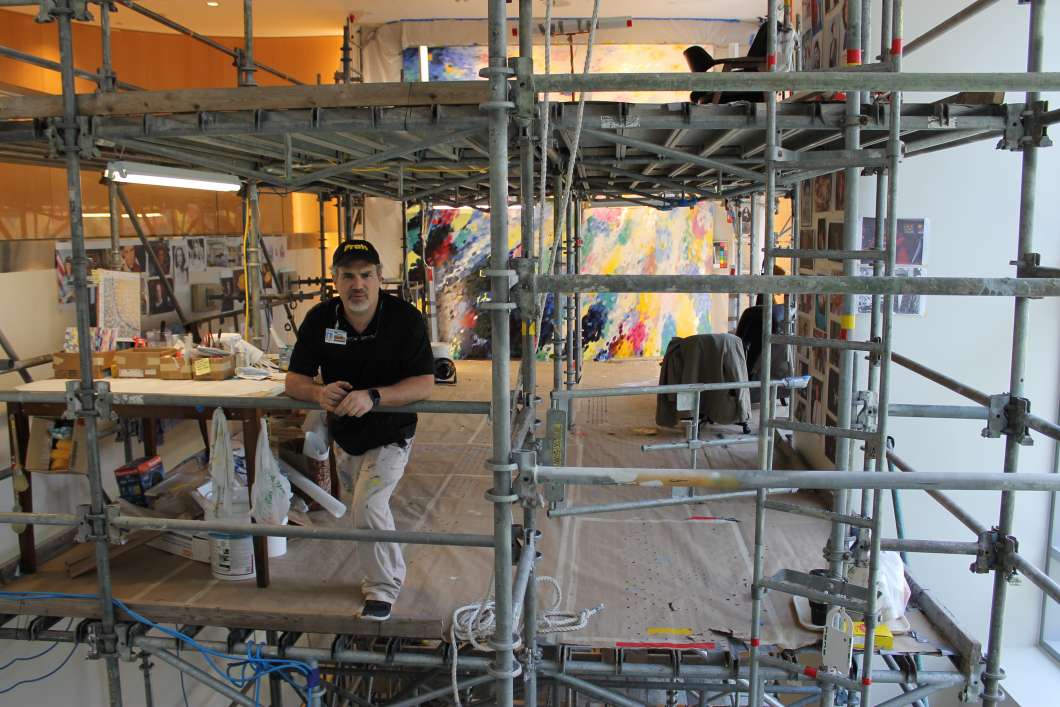 Andrew Rose is painting a giant mural on a wall inside Florida Hospital. Rose, who is from Hawaii, started working on this artwork back in December.

To create the 18 foot high mural, Rose had to have a multi-level scaffolding built.There are buckets and pulleys to haul up supplies, a comfy chair on one level so he can sit back and contemplate the painting as it takes shape, and a series of ladders connecting the different levels.

Scroll to the end of the story to see a slideshow

“We’ve taped everything to be visually recognizable,” says Rose.

“When I first got on the scaffolding, I couldn’t see the edges, so as you can see at the front we’ve got red and yellow stripes, so in my peripheral vision I would know where I was.”

Rose says he’s dropped plenty of things in the 10-14 in. gap between the platform and the wall.

The crossbars are padded for safety so Rose doesn’t bump his head as he works. He shows how he clambers up and down the ladders between the three levels of the scaffolding.

“As you can see I’m straddling the well here. I’m probably 10 or 15 feet above the catwalk. I couldn’t do this the first week, but now I hang out up here, I talk with friends. It’s like a jungle gym. It’s totally fun.”

The mural is based on one of Rose’s paintings that he describes as a “spray of golden light.”

“You get this divine light, that has been created through more than 10,000 individual brush strokes, that together create more color than their original colors themselves,” says Rose.

The original plan was to paint the mural in 6-8 weeks. Rose says the project is taking several months… but he’ll know when it’s done.

“A painting is somewhat like a child. It tells you what it needs. It sometimes cries out, it sometimes walks away and says ‘I hate you!’ It’s very much a conversation.”

Rose on the upper level of the scaffold system. Photo: Matthew Peddie, WMFE

Photos and pictures are tacked to the walls of Rose's 'studio' for inspiration. Photo: Matthew Peddie, WMFE

Rose says he's lost paintbrushes & palette knifes over the edge of the scaffolding. But no shoes yet. Photo: Matthew Peddie, WMFE

The platform is equipped with a comfy chair for contemplation. Photo: Matthew Peddie, WMFE

Rose works from the original next to his mural. Photo: Matthew Peddie, WMFE