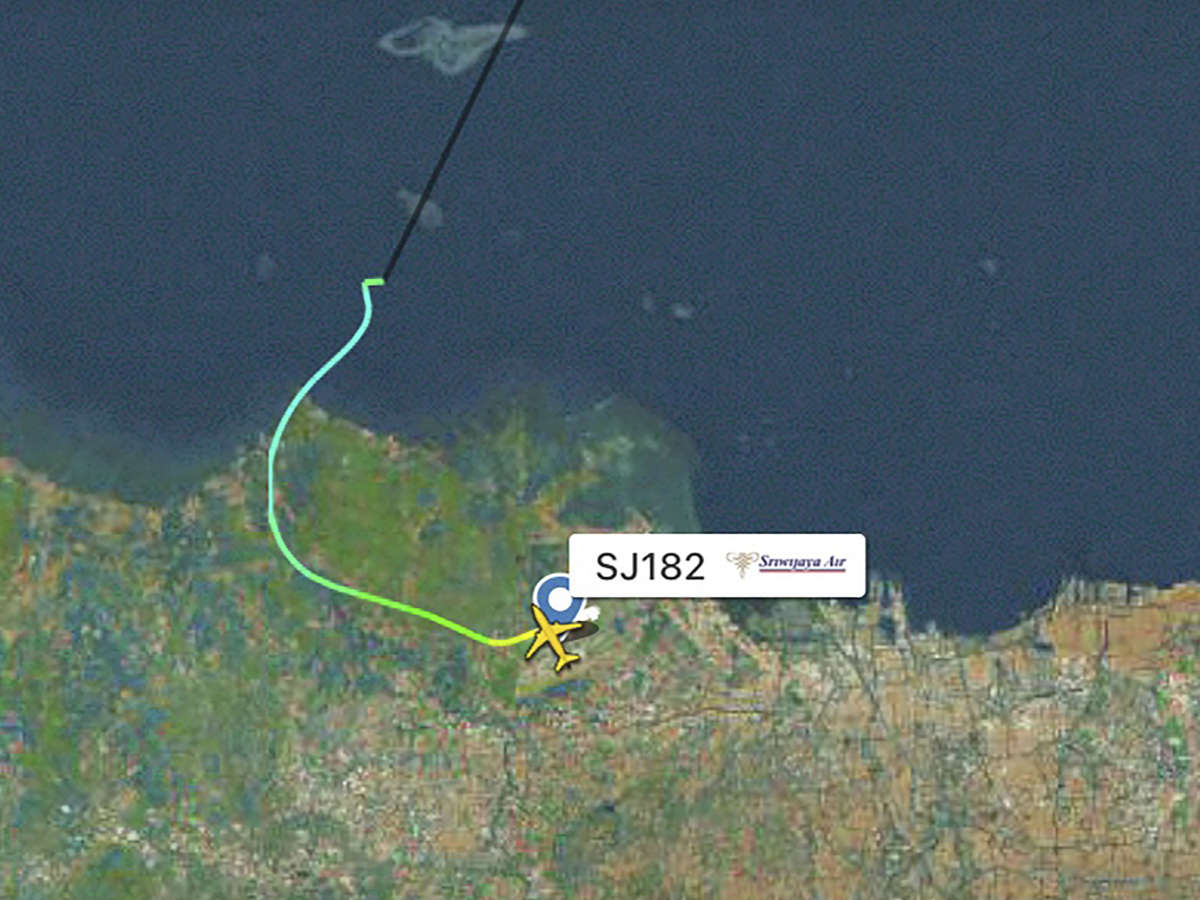 This radar image shows the flight path of Indonesian Sriwijaya Air Flight 182 before it dropped off radar on Saturday.

An Indonesian passenger plane carrying 62 people lost contact with air traffic controllers shortly after takeoff from the nation’s capital of Jakarta on Saturday, according to state transportation officials.

The Ministry of Transportation confirmed that airport authorities lost contact with the plane, Sriwijaya Air Flight 182, at approximately 2:40 p.m. local time. The plane, a Boeing 737-500, had taken off from Jakarta less than an hour earlier bound for the city of Pontianak on Indonesia’s Borneo island. Typically, it’s a flight that is around 90 minutes long.

About four minutes after takeoff, the plane lost more than 10,000 feet of altitude in less than a minute, according to the flight tracking site Flightradar24. The state-run Antara news agency said the plane had been climbing to an altitude of 13,000 feet before it lost contact with air traffic controllers at a position less than 15 miles from Soekarno-Hatta International Airport.

The plane was carrying 56 passengers and six crew members, according to the Associated Press, though Transport Minister Budi Karya Sumadi later told reporters that there were 50 passengers and 12 crew on board. Sumadi said that seven children were among the passengers.

In a statement to The New York Times, the airline said that management was “still communicating and investigating this matter and will immediately issue an official statement after obtaining the actual information.”

“We are aware of media reports from Jakarta regarding Sriwijaya Air flight SJ-182,” Boeing said in a statement. “Our thoughts are with the crew, passengers, and their families. We are in contact with our airline customer and stand ready to support them during this difficult time.”

The initial search appeared to be centered in the Java Sea in an area between Lancang island and Laki island — part of the chain of territory that makes up the Thousand Islands. Sumadi, the transport minister, said that at least a dozen vessels were involved in the operation, including four warships.

Authorities said that possible wreckage from the plane had been found in the waters northwest of Jakarta. According to local media reports, fishermen also spotted metal objects believed to be part of a plane earlier in the day.

Sriwijaya Air is the third-largest airline in Indonesia, and since its launch in 2003 the carrier has never had a fatal crash involving a passenger. In 2008, however, one of the carrier’s 737s drifted off a runway and struck three farmers, killing one, according to the Aviation Safety Network.

In October 2018, Indonesia witnessed one of the worst air tragedies in its history when Lion Air Flight 610 plunged into the Java Sea shortly after takeoff from Jakarta, killing all 189 people on board.

The accident was the first of two crashes involving Boeing’s 737 Max jetliner — a different model Boeing than was in use for Sriwijaya Air Flight 182. On Thursday, Boeing agreed to pay $2.5 billion to settle criminal charges that it repeatedly concealed and lied engineering problems that contributed to the 737 Max crashes.