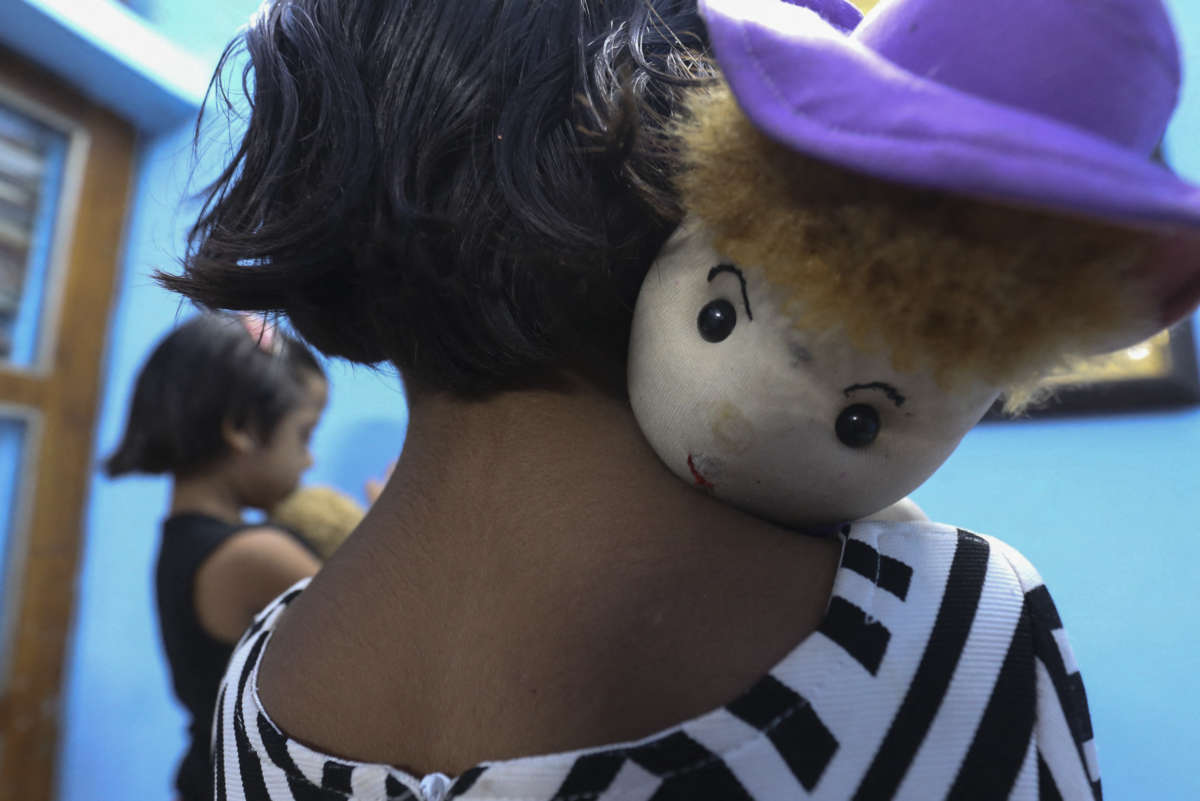 These 6-year-old twin sisters in India lost both parents to COVID and are now being cared for by their mother's uncle. They're part of a growing population of COVID orphans in the country.
Image credit: Gagan Nayar

A 7-year-old boy lost both parents to COVID-19 and is alone in the family apartment, with no relatives to care for him. Neighbors know about the situation but are afraid to intervene directly — afraid of being entangled in red tape, afraid of catching the virus.

That’s what a caller told Akancha Srivastava, a cyber safety expert based in Mumbai who started a helpline for reports of children who’ve lost one or both parents to COVID. India refers to these children as COVID orphans. Their plight is one of the heartbreaking pandemic developments to emerge from India, which in May recorded the greatest number of deaths in one country in one month from COVID 19: over 120,000.

It’s impossible at this time to come up with a realistic count of how many children are affected. But India is making an effort — and struggling to face the many issues that arise for these unfortunate children.

On May 28, the National Commission for Protection of Child Rights (NCPCR), part of India’s Ministry of Women and Child Development, issued an advisory to all Indian states to identify children who had lost one or both parents since April 2020.

Some of these children may have lost a parent to other causes and not just COVID, says Priyank Kanoongo, chairperson of the NRCPR. They were included in the count because there was no clear-cut way to focus only on COVID deaths.

The goal in collecting this data was to identify children in need and then develop mechanisms to help them. “It’s an ongoing effort to coordinate between the national regulatory body and the local child protection authorities in every state,” says Swarupama Chaturvedi, a lawyer in India’s Supreme Court who appeared on behalf of NCPCR to file the numbers in a court affidavit. “That way, children who need financial assistance or who need to continue their education can receive government support.”

To that end, Prime Minister Narendra Modi announced that each child who has lost both their parents or legal guardians to COVID would receive a payout of 1 million rupees ($13,805) in installments after the child turns 18 and the entire amount when they turn 23.

Governments of various Indian states have announced more immediate financial relief with monthly payouts. The monthly payouts differ from state to state but are in the range of $25 to $35.

That’s been her goal. Prior to setting up her COVID orphans hotline, she has been running a private, multilingual helpline for people threatened with online violence that could lead to crimes such as acid attacks or rape.

In May, she noticed a new flood of messages coming in from distressed people informing her of COVID orphans in their neighborhoods. So she expanded her activism, taking calls and passing on information to authorities.

This new helpline received a lot of attention when Bollywood celebrities shared it. “My heart goes out to kids left alone due to the pandemic — either they have lost one or both parents to the virus or the parents are in hospital … We cannot even begin to fathom the trauma,” actor Kareena Kapoor Khan wrote on her Instagram.

Since then, Srivastava has fielded many more calls – over 100 a day, she estimates. She remembers the call about the 7-year-old boy vividly. His mother had died a few years ago; this spring, his father contracted COVID-19, was hospitalized and died two days later. The boy had no other known family. Tenants in the building were worried about his welfare and left food by his door (which was kept open). But they were afraid to help in person lest they catch COVID.

What’s more, the boy hadn’t been told that his father had died, and the neighbors didn’t know how to break the news.

“I told [the caller] to keep an eye on the child, while I informed the police,” Srivastava says. In a few hours, she’d informed officers she knew and trusted. They arranged for the Child Welfare Committee to care for the boy.

As awful as it is for a child to lose their parents, there are other serious threats to their mental and physical well-being.

On 13 May, in a media statement, UNICEF India’s chief Yasmin Haque said these children “are not only living an emotional tragedy, but they are also at high risk of neglect, abuse and exploitation.”

Haque’s statement came after people began sharing personal details of these orphaned children on Twitter and in social media. It’s not clear who was posting this information: random acquaintances of the family, naive friends or neighbors. But in a country where child labor is rampant, action was taken immediately to take down these postings.

“I was shocked,” says Srivastava. “The tweets revealed the child’s age, gender, their address, the fact that they’d lost their parents and asked if anyone was willing to adopt them,” she says. “It struck me that though these tweets may have been well-meant, they were putting children in grave danger.”

“Children in such situations are at risk of being forced into child labor, trafficking and transactional sex [sex in exchange for food or other items],” says Sonal Kapoor, founder and director of the Protsahan India Foundation, New Delhi, an organization that works to protect vulnerable children in slums.

Even when children aren’t forced into such horrible circumstances, they still may need counseling after losing a parent or being uprooted from their neighborhood.

While trauma counseling exists, it is often grossly inadequate, says Sudarshan Suchi, CEO of the Indian chapter of Save the Children. “Mental health is a critical need, especially now, when so many children have had their lives completely overturned in this way,” he says.

“And the information we have now is inadequate. There may be many more children in need of help, but the pandemic — and everyone keeping to themselves — is making it difficult to get an idea of how big this problem really is. India’s child shelters and orphanages are already at full capacity.”

Can adoption help ease the stress on shelters?

Adoption laws in India are stringent. On an average, only 3,000 t0 5,000 children are adopted every year compared to the 135,000 children adopted annually in the U.S. And these laws are not about to be relaxed despite the growing numbers of COVID orphans. “These laws are meant to protect minors from exploitation,” says Chaturvedi.

In any case, adoption of older children is considered rare. “People tend to adopt babies or children under the age of two,” says Srivastava.

Since adoption isn’t a viable option and shelters are overflowing, the government is relying on relatives to provide care. It’s called “kinship care” and can work to the child’s benefit, says Kapoor. But in low-income families, the new guardians may need financial support.

“Kinship care involves seeing whether there is a guardian who can care for the children within their extended families first and to support that guardian,” says Kapoor.

She mentions the case of a 7-year-old boy and an 11-year-old girl living in a Delhi slum who lost their father to COVID in March 2020. This April, their mother died of the virus. Grandparents were willing to care for them. On one of the visits to their home by a member of the Protsahan Foundation, the grandmother was preparing sugar roti (a kind of sweet flat bread) for the children. She’d taken on additional labor as a domestic helper to help pay for their care.

“Supporting the elderly grandparents and helping them care for the children then became our goal,” says Kapoor. They offer regular payouts in addition to monthly assistance from state governments.

The child welfare specialists urge that the government track a child’s progress through frequent home or shelter visits and documentation of care.

“While there are no perfect solutions, at least ensuring that a child is free from harm now can help see them through the profound tragedy that COVID has wrought in their lives,” says Suchi.