Incumbents Poised For Big Wins Despite All The Attention On Outsiders 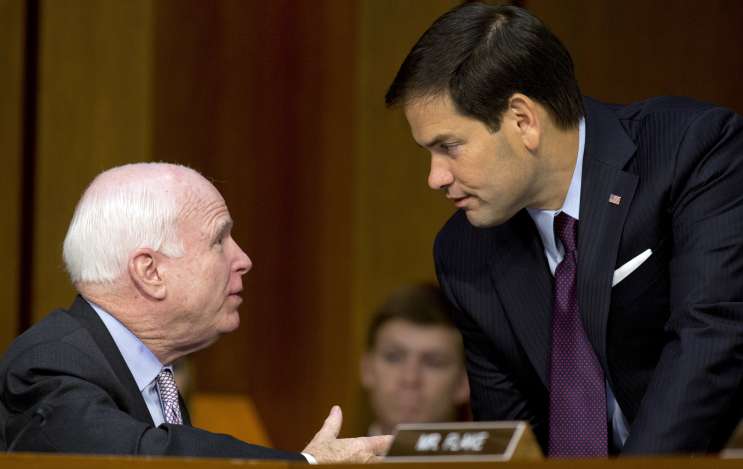 Three big-name political insiders have been targets of the activist, outsider wings of their parties.

And yet all three — Republican Sens. John McCain of Arizona and Marco Rubio of Florida, as well as Democratic Rep. Debbie Wasserman Schultz — appear safe in their primary battles for reelection Tuesday.

McCain has been holding off a challenger running to his right on immigration; Rubio is well ahead of a candidate fashioning himself in the mold of Donald Trump; and Wasserman Schultz, the former Democratic National Committee chairwoman bedeviled by the progressive left, is favored to beat back an opponent funded by former Bernie Sanders supporters.

It’s all remarkable in this year of discontentment with politics as usual. In Wasserman Schultz’s case, she stepped down from her chairmanship of the DNC after emails revealed the party appearing to favor Clinton. Millions poured into the coffers of Wasserman Schultz’s opponent, Tim Canova, a college professor. But Wasserman Schultz is well known in her district, and it went overwhelmingly for Hillary Clinton in the primary.

It’s an even bigger deal for Republicans. They nominated the ultimate outsider for their presidential nomination — Donald Trump. Yet, down the ballot, those same voters are on track to stick with incumbents against conservative, outsider challengers in every Senate GOP primary election this year.

The fact that insiders are likely headed for big wins on the GOP side is one of the more surprising outcomes in a year that has seen Republican voters seemingly eager to uproot the establishment.

There are several examples:

– Sen. Lisa Murkowski, R-Alaska, won her Aug. 16 primary with 72 percent of the vote. She’s come a long way to rebound among Alaskan GOP voters, who defeated her in the 2010 primary at the height of the Tea Party movement. (She mounted a write-in campaign that year and won.)

– Conservative activists initially thought they could oust Alabama GOP Sen. Richard Shelby in his March 1 primary. But he dispatched his opponent and secured 65 percent of the vote.

– In Indiana, establishment favorite Rep. Todd Young handily defeated Rep. Marlin Stutzman in the Senate GOP primary by a 67-33 percent margin even after Stutzman was backed by many of the same activists who helped oust incumbent GOP Sen. Richard Lugar in his 2012 primary.

The non-partisan Rothenberg Political Report notes that of the 19 Republican senators, who have already won primary elections this year, none of them won with less than a 61 percent of the vote.

Conservative activists can claim one Senate victory this year, but it may be a shallow one. In Colorado, Darryl Glenn won the GOP primary with 37 percent and with the support of conservative activists. He faces incumbent Democratic Sen. Michael Bennet this November. Glenn has been unable to dent Bennet’s double-digit polling lead. Election forecasters favor Bennet to win reelection, because Glenn hasn’t expanded his appeal beyond conservative voters in a swing state.

Kyle Kondik, an elections analyst with the University of Virginia’s Center for Politics, said Republican voters have focused their anti-establishment energy this year toward the top of the ticket. Senators continue to benefit from one of politics’ oldest rules: it’s hard to beat an incumbent.

“History tells us that these upsets are few and far between,” Kondik said. “Republicans don’t seem to like their leaders right now, and they don’t value experience very much, but that was really about the presidential race. These incumbents have so many advantages.”

Jenny Beth Martin, co-founder of Tea Party Patriots, agrees. “I think the most important thing is there’s an ironclad rule of politics that you cannot be somebody with nobody,” she said. “We’ve seen relatively few challenges to the incumbents, because they have lacked either the name ID or the funding to pay for television ads and mail pieces to increase their name ID.”

Incumbent advantages do include high name identification, deep pockets and party support to get out the vote. McCain and Rubio are benefiting from all of those factors.

Arizona: McCain’s leading primary challenger is former state Sen. Kelli Ward who has led a spirited — and, at times, controversial — challenge to the Senate’s sixth-most-senior Republican.

Ward has run to McCain’s right on immigration, aligning herself with Trump. She’s also questioned his age and fitness for office, wishing him happy birthday Monday on national television to highlight that he turned 80.

The most recent CNN poll in the race gave McCain a comfortable 55-29 percent lead a week out from primary day, though some observers believe it to be closer.

Florida: Likewise, Rubio, who surprised many when he decided to run for reelection at the last minute despite pledging not to, is favored to win in a crowded primary field. His top challenger, wealthy businessman Carlos Beruff (pronounced beh-ROOF), is trailing by double digits in the polls. Beruff has invested millions in the race and campaigned as a Trump ally in a state Trump won handily in the presidential primaries.

Still trying to figure out the Trump effect on the GOP

Marty Cohen, a political science professor at James Madison University, said the down-ballot disconnect in the primary contests suggest that Trump’s affect on the Republican Party may be exaggerated.

“I think it shows the general shallow nature of Trump’s support within the party and the weakness of his campaign apparatus,” Cohen said. “I just don’t see there being any sort of grassroots organization for candidates like him, or for candidates who seek to espouse the benefit from what he did.”

Other outside conservative groups, like the Club for Growth and the Senate Conservatives Fund, have played a quieter role in the 2016 primaries.

The primary victories, however, do not mitigate the bruising general election battles ahead in which Senate Republicans are on defense in the fight for the majority.

There are about a dozen Senate races that make up the November battleground, Democrats are only defending one seat while Republicans are defending up to 11 seats.