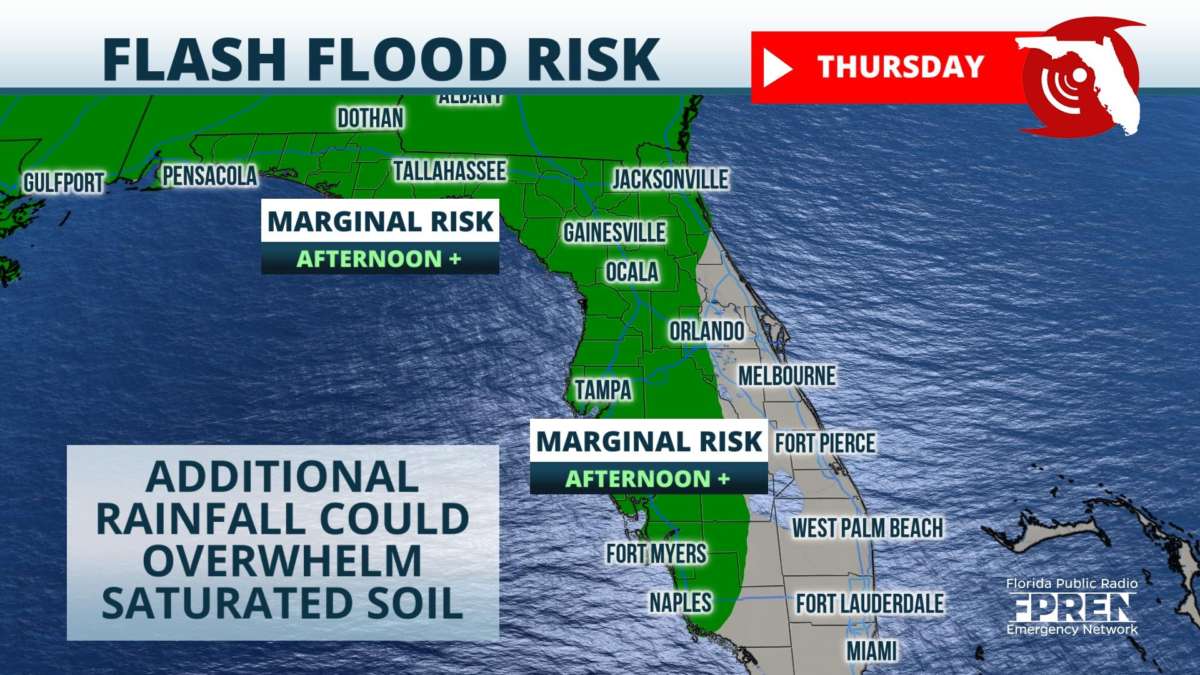 Flash flooding will be possible over portions of the Sunshine State Thursday through the weekend as thunderstorm activity becomes more widespread.

So far this week, afternoon thunderstorms have been driven inland, toward the western Florida peninsula, by a strong Atlantic breeze supplemented by widescale easterlies. These storms produced localized downpours, and since Monday locations from Cape Coral to the Big Bend have received three to six inches of rainfall. Farther north, the Panhandle has also received heavy amounts of rain this week, due in part to a stalled front directly to the northwest and humid onshore flow from the Gulf of Mexico. Since Monday, three to five inches of rain have fallen in areas from Apalachicola to the Mobile/Pensacola area.

Shower and thunderstorm activity is only expected to become more prevalent in these areas over the next several days. Mid and upper level winds are modeled to turn south-southeasterly Thursday through at least the Independence Day weekend. This wind shift will allow column moisture levels to increase and should also permit a train of mid and upper level troughs to stream through the state. Elevated moisture levels and additional atmospheric energy will likely result in more widespread afternoon thunderstorms each afternoon.

The primary hazard from the uptick in convective activity will be heavy rain rates. Steering winds are expected to be weak and thunderstorms could move slowly, resulting in prolonged downpours over one area. Flash flooding will increasingly become a concern each day as areas become saturated with rainfall and runoff.

Latest model guidance suggests that through Independence Day, widespread accumulations of one to three inches are expected from the area of Tampa Bay to Jacksonville. Locally higher amounts are possible, especially in areas that experience multiple rounds of thunderstorm activity.

Should the forecast verify, the rainfall will be beneficial for North Florida, which as of Thursday was classified by the USDA as suffering from abnormally dry conditions. Data from the National Weather Service confirms that month to date rainfall departures range from two to nearly four inches below normal.

The uptick in thunderstorm activity could continue through at least the middle of next week, before a pocket of dry air is expected to arrive from the southeast and sit briefly overhead.