In The Wake Of Prince’s Death 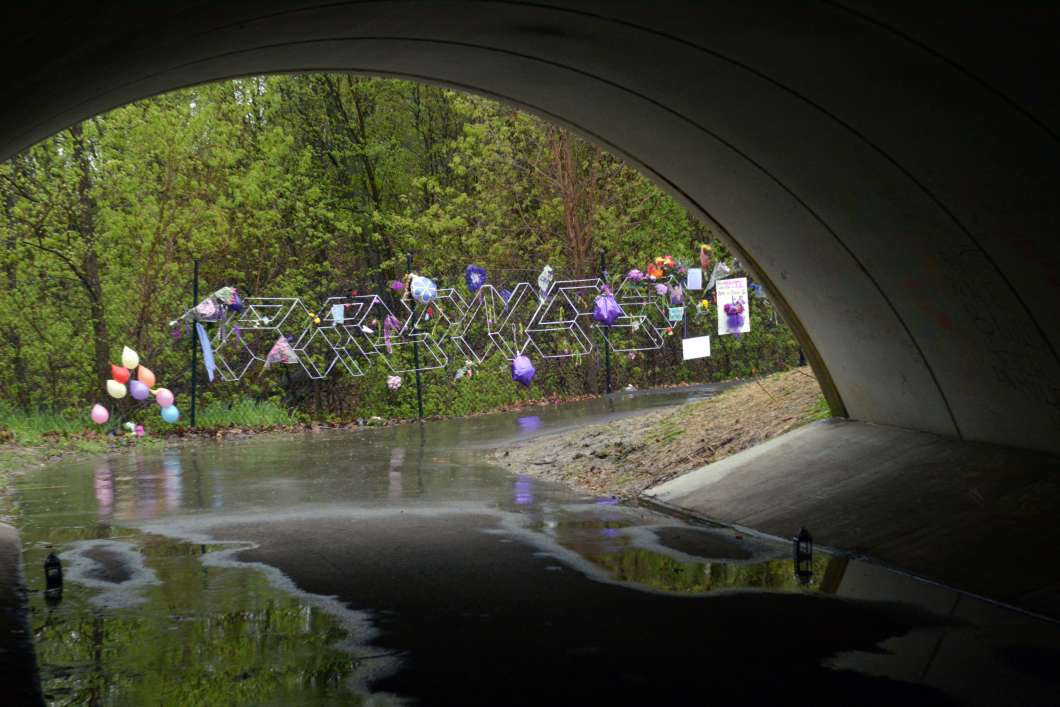 Flowers, balloons, and other tributes left by fans hang on the fence outside Paisley Park, Prince's home and studio, in Chanhassen, Minn., in April 2016. The prolific musician died on April 21, 2016 at age 57.

The cars were piled on top of each other and bleeding onto the curb of the highway as they inched west and north towards the Lake Ann Park parking lot, each blasting their favorite from the windows; families walked down the trail and under the tunnel beneath the highway they’d just come from, holding the strings of the purple balloons floating just behind them; families walking back to their cars had no balloons and little expression. Altars of brown paper lanterns, unlit during the overcast day, peppered the path towards the off-white, square-paneled compound.

I had gone past Paisley Park innumerable times growing up but, even with an aunt living less than two miles away, had never been this close before. The black chain link fence that surrounded Prince’s home was a mecca and an altar. Within two days it was already dense, thick with families’ shiny purple balloons, potted violets laid at its base, signs made of purple construction paper carrying messages of love and grief, all with a subtext of shock. And so much Bisquick. Inside, a memorial was rumored to be taking place. Outside, it was quiet. People paced and observed, took portraits, laughed, shared their sightings — at the airport, downtown, at the Fetus — and cried. The fence was the focal point, at least in this solar system, of confronting the sudden loss of an artist we’d come to assume would be shrieking and riffing into old age, while those much younger worked on indenting their living room recliners. Fifty or so feet behind the fence a line of media tents, dripping with tired-eyed reporters and their beaten-up lanyards, looked on bored, waiting for something to happen. When a member of Prince’s inner circle came out offering flowers, they descended and edged their way to the front of the crowd for better shots.

Imagining what had happened inside Paisley through all the years Prince had lived there was an exercise for another day. The fence was what we had.

Below are stories, remembrances and demonstrations of his eccentricity that we think sketch a useful cross-section of an artist the world would never fully understand, even if he had lived 1,000 years.

“If someone asks you to dance like Prince, what will you do? Spin, possibly, and do the splits, if you’re able. But there won’t appear to be anything especially Prince-like about that. It’s mysterious. How can you dance and dance, in front of millions of people, for years, and still seem like a secret only I know? (And isn’t it the case that to be a Prince fan is to feel that Prince was your secret alone?)” — Zadie Smith, on the inspiration of dance.

“I think, more than a song, you should remember … what he did to break down barriers. There are only a handful of artists that have broken down barriers between all the musical genres, and I think that’s how he should be remembered. I think he just has to be understood for the body of work he’s going to leave us — and I’m talking beyond just what we call traditional rock ‘n’ roll and funk and everything else. I think he’s got things that are in the vaults at Paisley Park that we will be unpacking for years to come, and we will be amazed.” — Owen Husney, Prince’s first manager, who brokered his deal with Warner Bros. Records when the artist was just 18.

“‘Eligible bachelor seeks the most beautiful girl in the world to spend the holidays with,’ the ad reads … A spokesman said the 33-year-old performer and songwriter was not holding a competition and his motives would be revealed later. Already this year, Prince has caused some giggles in the recording industry by saying he was changing his name to an unpronounceable symbol and also was retiring.” — Reuters story, Dec. 11, 1993, on advertisements Prince placed in newspapers around the world.

“Tipper Gore had it so wrong. Of all the music, all the forms of sexuality that might have been on offer to the youth in 1984, “Darling Nikki” was first-rate. Female autonomy, mind-blowing, consensual, victimless perversion, and a dirty little Prince who wants to grind grind grind grind grind grind grind grind grind grind. Did Tipper ever listen to that strange hymn at the end of “Darling Nikki”? You have to play it backward—hallmark, in other realms, of the Satanic. My sister and I played it. We knew what it said. Do you know? It says, The Lord’s coming, Prince is coming. And somehow, with his help, we learned how to come, too.” — Author and MacArthur Fellowship recipient Maggie Nelson, recalling her own sexual development and how “Darling Nikki” spurred Tipper Gore to found the Parents Music Resource Center, which resulted in parental warnings being placed on album covers.

“A man in complete control of his work from writer and musician to producer and director. He was such an inspiration. Playful and mind-blowingly gifted. He was the most inventive and extraordinary live act I’ve seen. The world has lost someone truly magical.” — Kate Bush, whose song “Why Should I Love You” featured guest vocals from Prince.

“‘Hey, how you doing? My name is Andre.’ ‘My name’s Prince.’ We start talking. I was a pretty aggressive kid, so I was like, ‘What do you do, what are you into?’ He says, ‘I play music.’ ‘Wow, so do I.’ He asks, ‘What do you play?’ I say, ‘I play horns, guitar and bass.’ He says, ‘I play piano and guitar.’ We hit it off. He seemed to be really passionate and I was very passionate. I started talking about how I’m going to be this. And he’s yeah, me too. Next thing you know we became best friends. — André Cymone remembers meeting Prince, who later lived with him and his mother in Minneapolis.

“Friday will be the first anniversary of his death, of the passing of Prince. I ran in memory of him … It’s a tough week for the Purple Army.” — Boston Marathon runner Alden Hall, speaking to the Herald earlier this week.

“The time Prince ‘evolved’ and wouldn’t sign yo mama’s Dirty Mind album cover cause he said he wasn’t into that no mo and yo mama told him “‘well you shouldn’t have made it then’ and you were embarrassed … The time Prince had a ‘swear jar’ and you just put a 20 dollar bill in it when you walk in … The time you sang ‘I Wanna Be Your Lover’ in the 3rd grade talent show wearing a swim top and the teachers cut you short because it was ‘inappropriate.'” — Erykah Badu, writing on Facebook the day Prince passed away.

“Few artists have influenced the sound and trajectory of popular music more distinctly, or touched quite so many people with their talent. As one of the most gifted and prolific musicians of our time, Prince did it all. Funk. R&B. Rock and roll. He was a virtuoso instrumentalist, a brilliant bandleader, and an electrifying performer … ‘A strong spirit transcends rules,’ Prince once said — and nobody’s spirit was stronger, bolder, or more creative. Our thoughts and prayers are with his family, his band, and all who loved him.‎” — Former President Barack Obama.

“Eddie [Murphy] had wanted to play Prince his new album. So during that basketball game, Eddie’s music was playing, via boom box, on a cassette. After that game, Prince goes over and he tosses the cassette out of the boom box and he says, ‘Let me ask you a question: Do you see me stop my show to do comedy?'” — Gilbert Davison, former president of Paisley Park, finishing a story made famous by Charlie Murphy on Chapelle’s Show.

“I talk about working with Prince being a catalyst and a turning point in my life… forcing you talk differently, think different. But I forgot to mention, he also made us dress differently. [Laughs] One of the caveats, when he shook my hand… he says ‘If you’re gonna represent Prince, you gotta look the part. I want you to get suited up, I want a tie, I want a handkerchief, I want shined shoes. I want you to look the part.'” — Monte Lipman, chairman and CEO of Republic Records, who worked with Prince to release the record 3121 and helped throw parties in Los Angeles with him.

“We were full of the punk stuff at the time. It sort of put us in perspective, like, ‘OK, we’ll go as far as we can with our limited talent, but this is the real deal. This guy is the real shit.’ He would be playing First Avenue when we would be playing the Seventh Street Entry, the little 100-capacity club that connected, and he was in the big room with 900 people. It was night and day. We had our little thing, but occasionally, when we were playing, and he would come in the room for three seconds, walk out and the entire room would empty, following him. I hope he did it on purpose. I think maybe he did.” — Paul Westerberg, co-founder and leader of The Replacements.

“There was this aura around every single inch of Paisley Park… this different… air. It was him, that building.” — Miho Takayama, who moved to Minneapolis from Japan in the ’90s in order to be closer to Prince.