In The Search For Exoplanets, Scientists Hope To Find A Planet Like Our Own 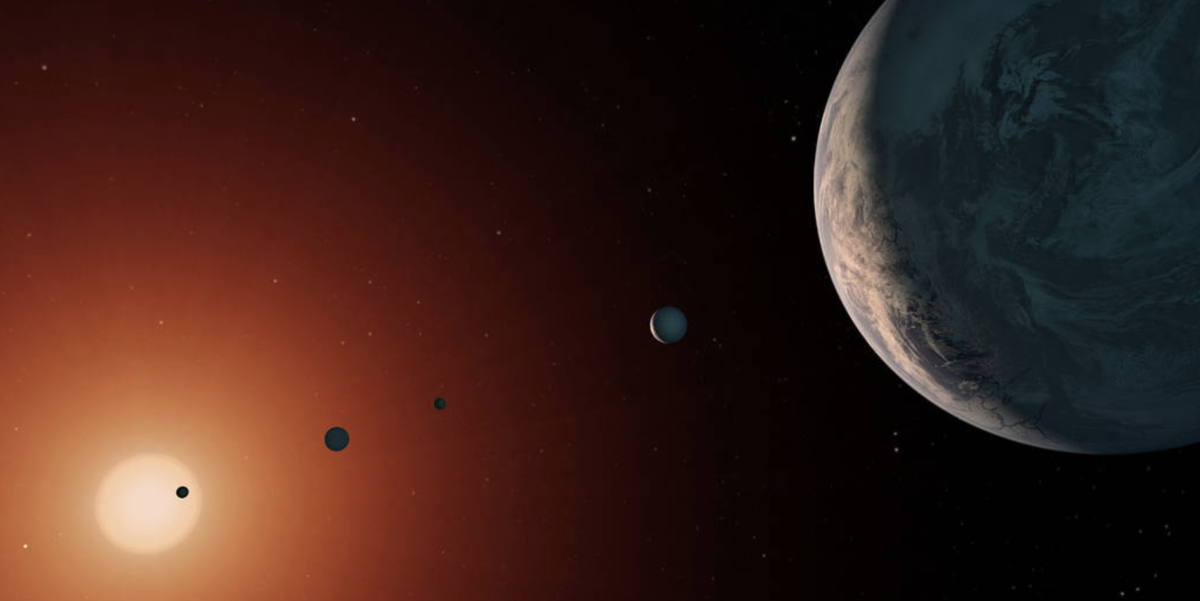 This illustration shows what the TRAPPIST-1 system might look like from a vantage point near planet TRAPPIST-1f (at right). Credit: NASA/JPL-Caltech

How do scientists locate planets outside our solar system? It’s not an easy feat, but astronomers and astrophysicists are using a variety of methods to understand other exoplanets and the possibility of life outside of our solar system.

Scientists like Dr. George Ricker, a senior researcher at MIT, and Dr. Theodora Karalidi, an astrophysicist at the University of Central Florida are leading the hunt, using data from space telescopes to help us gain a better understanding of these exoplanets.

The TESS telescope is approximately three feet across, five and a half feet tall and weighs a little over 600 pounds. It is also fitted with four cameras and arranged to observe space in different directions.

“They’re actually splayed out along a direction that gives a field of view of 96 degrees in one direction and 24 degrees in other,” Dr. Ricker said. “So at any given time, TESS is looking at as much as 400 times the field of view that is typical for many satellites that would make observations of this sort. It’s a very fast optical system.”

Data from the telescopes show the expoplanet’s projected distance from earth and provide a possible idea of its physical characteristics including a potential for water on its surface.

TESS was launched in 2018 from Cape Canaveral on SpaceX’s Falcon 9 rocket and completed its primary mission in 2020. Mission managers decided to extend the life of the mission. “In the first survey, we were concentrating on going out to about 200 or 300 light years. And now with the extended mission, we’re going out about 10 times further,” said Dr. Ricker.

LISTEN: You can listen to more of the hunt for exoplanets on this week’s episode of Are We There Yet?, 6:30 p.m. Tuesday on WMFE and wherever you get your podcasts.

So far, scientists have discovered thousands of exoplanet candidates using space and ground based telescopes. In 2017, a star system 40 light years away caught the attention of astronomers and astrophysicists. The system contains seven orbiting planets that could have an atmosphere — a prerequisite for supporting life as we know it.

The system is called TRAPPIST-1 after it was discovered using the TRAPPIST telescope in Liège, Belgium.

But measuring the distance between the star and its orbiting planets is not enough to determine if the exoplanet can host life. Other factors are considered in determining its potential, like finding an atmosphere.

“We are looking at these planets and to figure out if there is an atmosphere to start with.” Dr. Karalidi said. “If so, can we see the absorption signatures or emission signatures from the right elements like water in the atmosphere or oxygen. All things that are really important for life as we know it to exist there.”

Dr. Karalidi said better equipped telescopes, like the soon to be launched James Webb Space Telescope, will be needed to further investigate and understand TRAPPIST-1 and other exoplanets.

Scientists and exoplanet hunters can’t wait to get their hands on data from James Webb, which is scheduled to launch from French Guiana later this year.

“It’s going to be completely revolutionary in terms of our view of ourselves as well as our view of the cosmos,” Dr. Ricker said. “We know that planets are not unique, and if you want to search for things like evidence of life, for the first time in human history to actually look for these you can get [it] from James Webb.”