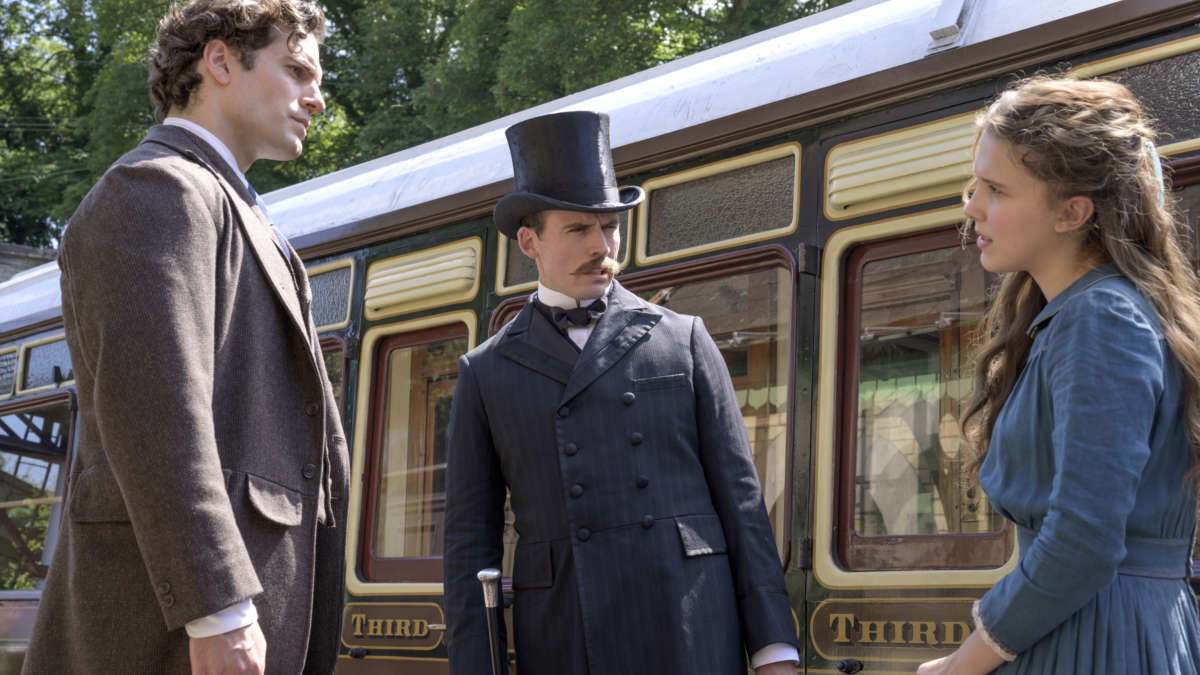 “Plucky” is one of those words that doesn’t get out and about much anymore.

Something about it feels off, a bit — regressive, condescending, even vaguely sexist, as it’s usually only seen in the company of the word “heroine” these days.

But I’m gonna dust it off and use it here, because there’s just no getting around it — “plucky,” after all, means “spirited, determined and courageous, especially when things are looking grim” and 16-year-old Enola Holmes (as played by Millie Bobbie Brown, who’s also — tellingly, I think — one of the film’s producers) is precisely that. She is pluckiness made flesh. Pluck incarnate.

The bright, breezy Netflix film Enola Holmes, which is based on a series of YA novels by Nancy Springer, benefits hugely from Brown’s lively, intelligent and charming performance. She’s so good here that even the character’s tendency to turn to the camera and address the audience — which she does a great deal (seriously, this film has more asides than an adodecahedron) — never gets wearying. You even start to find yourself looking forward to them, if you can imagine.

The plot: Enola awakens on her 16th birthday (she was 14 in the novel) to discover that her mother (Helena Bonham Carter) — an eccentric but brilliant thinker and suffragist — is missing. Following clues involving anagrams and cyphers, she sets off to London to find her, all while attempting to evade her older brothers Mycroft (Sam Claflin) and Sherlock (Henry Cavill), who are seeking to cart Enola off to a finishing school.

Do I need to tell you that the dour, prim head of the finishing school in question is played by Fiona Shaw? Or that Burn Gorman shows up as a villainous thug, forever lurking in doorways? I don’t, right? You guessed all that right away, yes?

The script is witty, the cast slightly more diverse than you’re likely expecting, and there are fun references to canonical Holmes elements throughout. True, this is a lighter and frothier take on Victorian England than we’re used to seeing, though it does flirt with some darker themes involving the mother’s fate that threaten to throw off the film’s tonal balance. And speaking of flirting — a romantic subplot involving a young marquess (Louis Partridge), who looks like what you’d get if Victorian farmers had grown boy bands out on the heath, generates neither heat nor sparks, and comes off as one of the film’s more formulaic YA components.

And I’m honestly puzzled by Cavill’s performance as Sherlock here, which, while it may comport with the books’ portrayal, feels wildly out-of-step with past interpretations of Arthur Conan Doyle’s hero. O.G. Sherlock is, after all, cold, shrewd, impatient and famously tetchy. Cavill, in stark contrast, is ridiculously warm and empathetic, even tender; the ultimate effect feels less like a radical re-interpretation and more like a clumsy mis-interpretation. (Plus there’s the small but telling fact that when classic Sherlock roamed the streets of London, he did so without bulging out of his tweed frock coat, as Cavill does. He could also put his arms down at his sides, as Cavill cannot.)

There are six books in the Enola Holmes Mysteries series, and the film plants several seeds that will only come to fruition should a sequel or two happen. Here’s hoping they do, because the world of this film is a pleasure to disappear into, and in Enola, Brown has found a role to which she seems perfectly — even uncannily — matched.