In The ’24th Mile’ Of A Marathon, Fauci And Collins Reflect On Their Pandemic Year 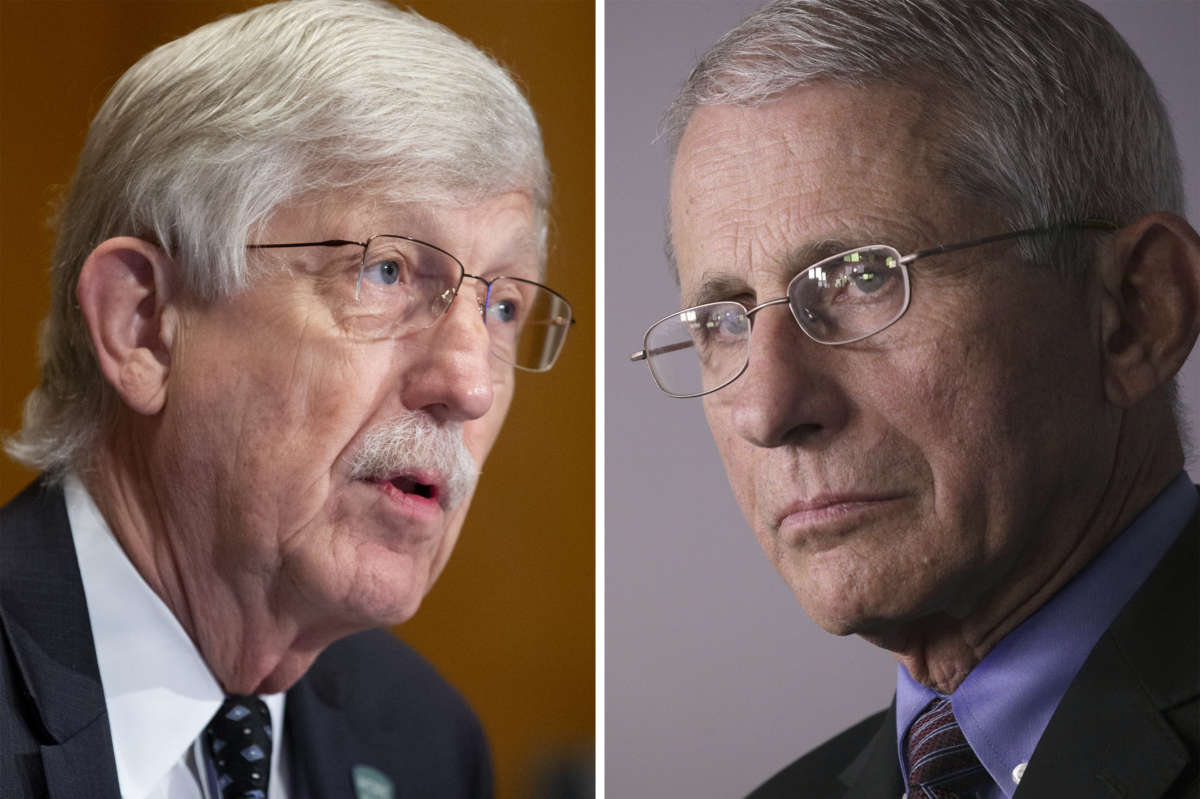 Dr. Francis Collins, left, and Dr. Anthony Fauci are two of the most public faces of the U.S. fight against the coronavirus pandemic.
Image credit: Michael Reynolds, Alex Wong

A year ago, everything changed for Americans as a new, highly infectious disease began spreading across the country.

Two scientists, longtime friends and colleagues became two of the most public faces of the U.S. efforts to fight what ultimately became the coronavirus pandemic: Dr. Anthony Fauci, director of the National Institute of Allergy and Infectious Diseases and a member of former President Trump’s White House coronavirus task force, and his boss, Dr. Francis Collins, director of the National Institutes of Health.

As they reflect on the past year, they both express surprise, and disappointment, at the unanticipated challenges they faced in getting public health messages out effectively.

“I think one of the diagnoses that comes out of this last very difficult 12 months is that we seem to be in a society that is so polarized that even objective truth doesn’t necessarily have a chance,” Collins tells All Things Considered in a joint interview with Fauci.

“That is a very disturbing aspect of what we’ve learned over these 12 months. And if our nation has a path forward to get into a better place, it has to take that on, that we have to be a nation that actually values truth and not just opinions,” he says. “We didn’t do very well with that over this last year.”

“One of the things that I’m stunned by, this idea that some people don’t want to get vaccinated because they actually think that Bill Gates and I have put a chip in the vaccine and we want to control their thoughts,” he says. “I thought that this was just a few people who felt that. But when you go around in the community of people who are hesitant about that, they read that and astoundingly, they believe it.”

As scientists, Fauci says, they never would have anticipated “such an egregious distortion of reality.”

“That is very frustrating from a scientific standpoint and becomes extremely problematic when you’re trying to implement a public health effort that could be lifesaving,” he says. “And when you don’t implement it, well, people die. That’s serious.”

In a wide-ranging joint interview, Fauci and Collins detail the biggest hurdles they faced as they fought the emerging virus, whether his old friend would have fired Fauci and what lies ahead in the pandemic. Here are excerpts, which have been lightly edited for length and clarity.

Was there a low point for each of you as this last year played out?

Dr. Anthony Fauci: The low point for me was the fact that we were trying to deal with a true public health crisis of unprecedented magnitude and impact, and the data were evolving in real time. And as scientists, we had to — I know I had to, I’m certain Francis was in exactly the same boat because we were speaking to each other literally every night during that period of time — whereas the science evolved, you wanted to make recommendations and/or guidelines that reflect the science. When the science changes, in the sense of the data is new data and new information, what you try to do is modify things and be humble enough and flexible enough to be able to give information.

The low point is that when you try to do that, we were doing it in an arena of such divisiveness in society, where anything that was said undertook a political connotation, whether that was avoiding crowded places or wearing masks. And it was extremely frustrating and, quite frankly, painful to try and get a public health message out that would be lifesaving. And yet you see people throughout the country in different areas turning it into more of a divisive ideological cleft between people.

Can you give an example of a message you were trying to get out there, and you could see it was not landing?

Fauci: Here’s a typical example that I think most people know about now. We put a lot of effort, when we realized that the economy was in serious trouble, that we had to very carefully open up the economy, open up the country, but we needed to do it very carefully. So Dr. Deborah Birx [the White House coronavirus coordinator] and I and others put together these guidelines, that people had to have an indication that there was a decline in cases before they opened up. We carefully articulated that to the American public.

And then unfortunately, soon thereafter, [President Trump] said, “liberate Virginia,” “liberate Michigan.” And people took that as a signal that they didn’t have to pay attention to the carefully crafted guidelines. That’s one concrete example of the frustration that we felt.

Dr. Francis Collins: I think Tony has outlined it very well, the frustration that we all felt. Tony and I are not political figures. And to see the way in which this whole set of public health recommendations took on a very strong political overtone that didn’t belong there was incredibly disheartening. Gosh, we were all working 100 hours a week — and in many ways still are — trying to do everything possible to come up with the solutions for this crisis, in terms of therapeutics and vaccines, and yet the simple measures that really should have been adhered to were so difficult to get people to actually appreciate and that really was one of the hardest parts of this whole sad year.

Collins: It wasn’t. And yes, many people asked me, have you been asked to do something to get Dr. Fauci to stop contradicting the president? And I would say no, and I never would either. I was never asked to come forward with a plan to fire Dr. Fauci, and I would never have done that to Tony, as the most important voice for the truth on infectious diseases. If I had been asked to do that, I would have had to resign myself first.

There’s been a fair bit of criticism of these latest CDC guidelines [on safe activities for vaccinated people], that they are too timid, too limited, including from scientists and doctors. Are you sympathetic to that view? People are desperate for some glimmer of normal life.

Fauci: I am sympathetic with that feeling. And we’re in constant discussion with the CDC. They have a large group of experienced epidemiologists who are trying to make these decisions based on a combination of real data, which they collect in real time every day with modeling studies, as well as a good dose of what we refer to as real-time common sense. These guidelines that came out are not the final guidelines at all, and in pretty quick succession, I believe you’re going to be seeing updating of these guidelines.

Collins: This is, after all, one of those circumstances, though, so you don’t want to make mistakes, just as we’re beginning to see a way forward here. We have been on a marathon since this all started a year ago. And you know, when you’re running a marathon, you don’t want to stop at the 24th mile. You want to be sure you finish well. I think that’s kind of the picture we have right now. Everybody is incredibly frustrated and tired of all of this, we just have to stick it out here for a few more weeks and months to make sure that we get to that finish line in a way that saves the maximum number of lives.

So patience, I hate to say it, is still needed, But I think give us the summer, the early fall, this is going to be a very different country, in a very good way. And we will all be able to sort of look at that and say, “We got through it together.” And boy, am I ready for that.