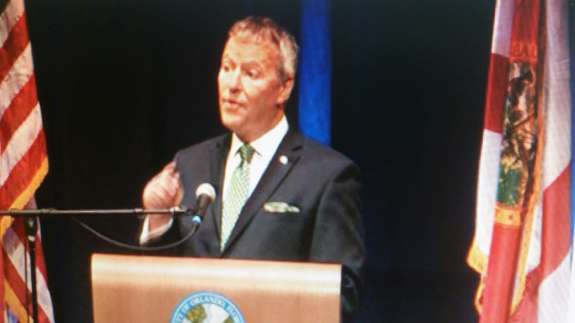 The most interesting part of Orlando Mayor Buddy Dyer’s “State of the City” speech Wednesday morning came at the very end. “My passion for Orlando is larger today than it’s ever been and it’s for that reason I will be running for another term as your Mayor,” said Dyer.

Mayor Dyer confirmed he’s running for re-election to lead the City Beautiful. He delivered the “State of the City” address at the Dr. Phillips Center for the Performing Arts to an overflow crowd, touting some of the city’s biggest accomplishments.

“We opened this amazing facility, we reconstructed our Orlando Citrus Bowl, secured a Major League Soccer team and broke ground on their stadium, added eight iconic sculptures downtown, kicked off SunRail and started planning a downtown UCF-Valencia campus,” he said.

There’s a proposal moving forward to hold city elections this November instead of next year.