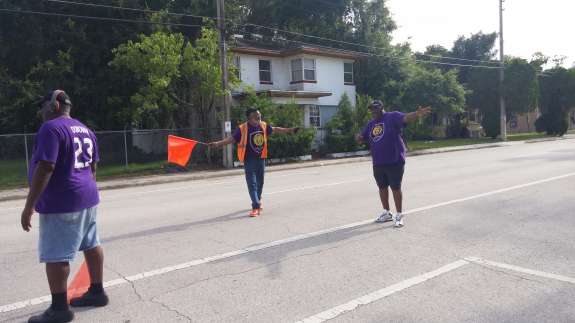 Gordon Smith and his crew flag down passing cars to park in his grass lot along South Street. Photo: Brendan Byrne

It’s game day. The Orlando City Soccer Club hosts the Philadelphia Union at the Citrus Bowl, and the Orlando Predators tackle the Tampa Bay Storm at the Amway Center.

It’s more than three hours until the Lions kick off and the first snap of the Predators game – but the parking garage on South Street and Garland Avenue is filling up fast. With a price tag of $10, some cars are looking for a cheaper option.

If you drive a bit farther down South Street, past the line of buses outside the arena, you’ll find. Gordon Smith. It’s hard to miss him. Even if you don’t see him – you’ll hear him.

His booming baritone voice yells “PARKING” as he flags down motorists to park in his empty lot – one he owns with a business partner. He charges $5 for a spot. “We’re trying to help the city out with parking,” he said.

The Citrus bowl provides parking to fans and has parking lots outside the gates with about 6,000 spaces. But the Orlando City Lions are averaging about 30,000 fans per game. “They Don’t have the facilities to compensate for the people in the arena,” said Smith

Smiths’ lot fill up fast. Each time the stop-light changes to green there’s a string of cars lining up to park in the grass lot.
“We can get in about 75-80 cars.”

So let’s do the math – 80 cars at $5-bucks a pop – Gordon’s making $400 a game on that lot. And he’s got a similar lot across the street – another $400. And Gordon tells me he’s selling spots alongside his house a few blocks west of here.

He and his partner are in talks to buy another lot.

But he’s not doing it alone. He’s got a staff of two more guys helping flag cars and collect parking fees. “These guys, all of us, old folks. As a matter of fact, he’s a 100% disabled vet. And he’s another vet,” explained Smith.

Smith’s not the only game in town. Continue walking toward the Citrus Bowls and there’s a lot in just about every empty field, and they’re filling up.

Malcolm Lee stands at the corner with an orange flag – waving it at any passing car. He’s a life – long resident of the community

Unlike Smith, Lee is selling spots for a landlord. He doesn’t handle the money, just flags down cars to get them to park in his boss’s lot. “We usually do good around here. Everything’s legal, nothing to worry about,” said Lee.

While Smith’s boss may profit on selling spots, Lee says the work highlights the issue the community of Parramore is facing. He said the city has forgotten about them in the purple wave of support for a new soccer team and their stadium.

“They don’t have nothing to help nobody out with. So people gonna do all this kind of stuff. When I was coming up we had all kinds of stuff, wouldn’t dare be out here. But they don’t have the programs that they used to have for people. And it’s just not right. We shouldn’t have to be out here to do crap like this,” said Lee.

“I don’t even like doing this mess. But I gotta make it some kind of way, I’m not going to take it from nobody.”