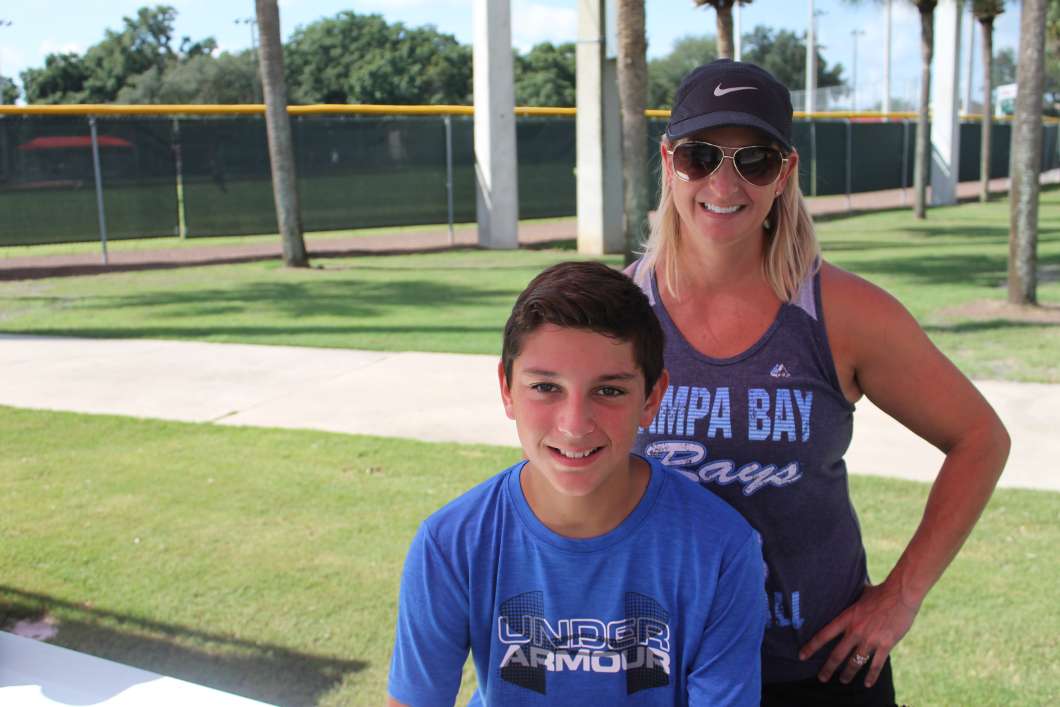 Anne Aranda says her busy family life prevents her from deciding how to vote. Photo by Amy Green

It’s a hit. Spectators cheer and volunteers help as a child with special needs runs toward first base, his baseball helmet bobbing loosely on his head.

Anne Aranda of Sanford is among the parents watching from the stands at Eastmonte Park in Altamonte Springs. Her 13- and 12-year-old boys are among the volunteers.

She says it’s her busy family life that prevents her from deciding how to vote in this neck-and-neck presidential race.

“Honestly for me it’s being able to sit down and dive into all of the information.”

“It’s not necessarily Trump. It’s his running mate Mike Pence. I’m a big fan of him and what he’s done in Indiana.”

Suburban mothers constitute a swing voter group the presidential candidates are watching closely as the November general election approaches. These women neither are urban who tend to vote Democrat nor rural who tend to vote Republican. Often they are swayed by children’s issues.

Susan MacManus of the University of South Florida says suburban mothers like Aranda represent one of the biggest unknowns about the presidential race. Florida is a swing state that with more electoral votes than any other is virtually essential to presidential candidates.

Near The Heart Of The I-4 Corridor

Seminole County neighbors Orlando to the north, putting it near the heart of the I-4 corridor where rural north Florida blends with urban south Florida. Here tree-lined neighborhoods mingle among some of the region’s most distinguished schools. The county has favored Republicans for president dating to Franklin Roosevelt but is one Democrats target because of its location.

“In Florida traditionally suburban areas and suburban counties like Seminole County are the swing counties,” MacManus says. “And it is within those counties often the suburban woman, particularly with kids, who does make up their minds at the last minute to swing in one direction or the other.”

Children play among the showers and spouts at Trailblazer Park in Lake Mary. Sunitha Shivadeduni of Heathrow watches her daughter and son, ages 9 and 5. She says she supports Hillary Clinton because of her health care policy.

“My son, he needs more health care support because he has some development delays. So we like to vote for the person who is looking at the broader picture in those areas.”

But Lisa Weller of Longwood backs Trump. She is at the park with her 3-year-old grandchild. Three of her four children are in college. All have jobs.

A few minutes away at the library in Casselberry it’s storytime.

Sara White leads the small group of babies and their mothers in song. Tanya Mahan of Maitland is here with her 6-week-old daughter, who sleeps soundly on her shoulder. Mahan says she’s not sure how she’ll vote in November.

“It really is this year the lesser of two evils.”

She says she doesn’t trust Clinton but doesn’t agree with Trump’s Republican ideology.

“I like that Donald Trump is not your standard politician and that he’s going to be doing things that we haven’t seen being done before, and I think we need a change. I’m a registered Democrat, and if I were to vote for Hillary Clinton it would not be because I like her. I don’t. It would be a vote for my party.”

She says she might consider a third party candidate or flip a coin. In a swing region like Florida’s I-4 corridor suburban mothers like Mahan could decide the presidential race.