In ‘Plot Against America,’ David Simon Finds Present Day In An Imagined Past 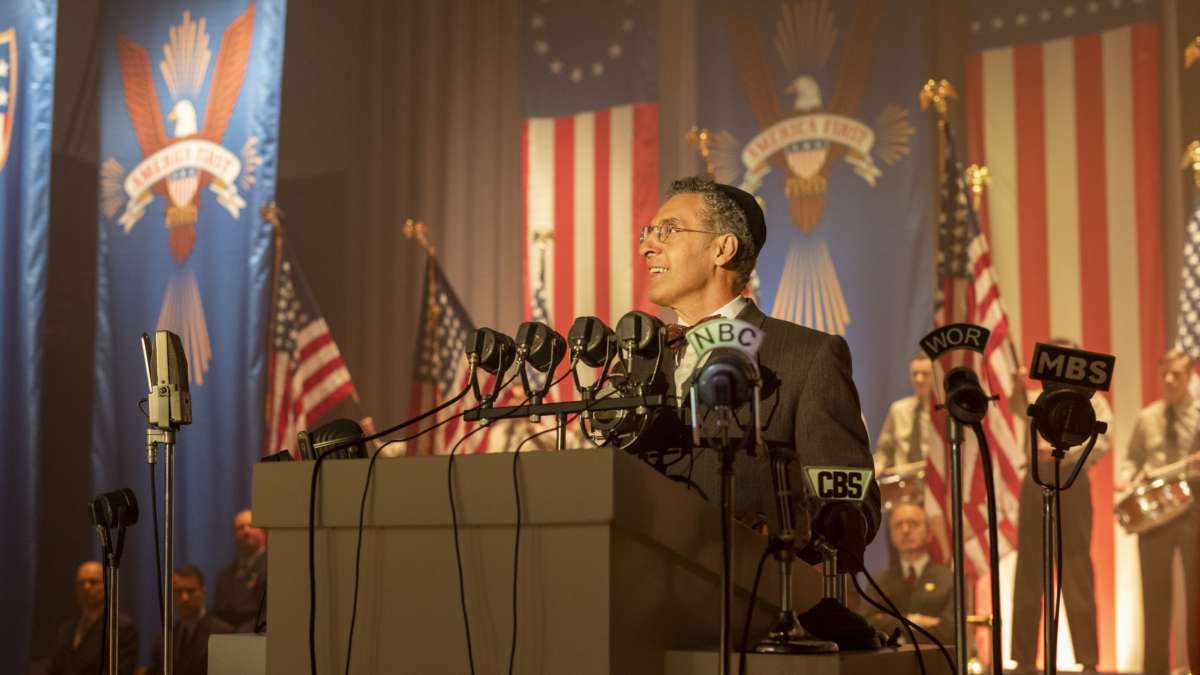 John Turturro plays Rabbi Lionel Bengelsdorf in The Plot Against America, a limited HBO series based on Philip Roth's 2004 novel. "Every one of the characters struggles with that question of: Where do you stand in an America that is transforming itself into something less than a republic?" says series co-creator David Simon.

David Simon’s new TV series, The Plot Against America, imagines an alternative American history, one in which an aviation legend and Nazi sympathizer is elected president.

Simon adapted the series from a 2004 novel by Philip Roth: Charles Lindbergh beats Franklin Delano Roosevelt and becomes the 33rd U.S. president. It follows the story of a working-class Jewish family living in New Jersey in 1940 as Lindbergh unexpectedly ascends to power.

Lindbergh’s presidency ushers in a wave of anti-Semitism that forces Jewish Americans to choose: who to be and how to act in the face of intolerance.

“Every one of the characters struggles with that question of: Where do you stand in an America that is transforming itself into something less than a republic? And that’s kind of where we’re at,” he tells NPR.

On creating a world that blends seamlessly with reality

[Roth] is seizing on a moment that is politically accurate, which is that Roosevelt running for an unprecedented third term, feared Charles A. Lindbergh, the aviator, as a Republican nominee more than anyone. He was an outsider to politics, he had great boyish charm and fundamentally he was the greatest American hero of his generation. But Lindbergh was also fundamentally a demagogue and an anti-Semite and a proto-fascist, and he very much admired Adolf Hitler.

On how the book resonates now, in this political moment

If you read the novel it’s startling how allegorical it is to our current political moment. He wrote it obviously without Trump in mind. This was published in 2004. It wasn’t allegorical when he wrote it, but believe me, I met the man for about an hour and a half when we optioned the book — he saw that he had perversely written an allegory for events that had not yet happened. He did not imagine a Donald Trump.

I think the “othering” of the Jewish Americans in plot in the novel is just simply and almost perfectly allegorical to the othering of people with black and brown skin and Muslims and immigrants that have propelled this administration to power — whether people see it or not, I think it’s just empirical.

I think we live in very divisive times, and that’s the 1940 that Roth portrayed. I remember somebody wanted me to make it into a miniseries in 2013, in the middle of the Obama years, and I had my doubts but I reread the book – it sounded like a possible project — and I called the guy and I had to say, “I don’t think the country is going that way anymore. We feel more inclusive, we feel less susceptible to demagoguery, I don’t think somebody coming up and ‘othering’ a minority group and playing into America’s worst impulses towards fears is a natural scenario for something right now.” How wrong I was. Three years later, I was walking the thing into HBO.

I think I’m fairly convinced not only that it can happen here, but that we are right now on a road that it will happen here, that unless there’s a sufficient level of awareness of how vulnerable we are and how fragile democracy actually is.

Churchill – no great liberal – said that democracy was the worst form of government until you considered all the alternatives. And he’s not far off. It involves quotidian struggle; every day you gotta kill snakes, every day you have to get a little bit closer to your ideals and the job is never done. That’s democracy. But it can be lost.

And if you look just even at what’s happening now with Coronavirus and the inability of our government to speak with one coherent voice on something as basic as a health issue, and you watch this level of misrule, I think you have to worry for the republic.

Danny Hajek and Arezou Rezvani produced and edited this story for broadcast. Heidi Glenn adapted it for the Web.