In Parramore, The Church That Stood Up To City Hall And Won 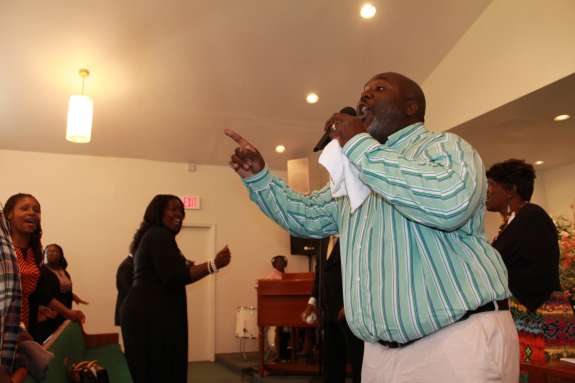 Orlando was poised to break ground on a new $155 million Major League Soccer stadium when something got in the way: Faith Deliverance Temple.

The 100-member congregation refused to give up its Parramore home for the stadium that city leaders vowed would bring an economic revival to the chronically distressed community.

Faith Deliverance Temple was the church that stood up to City Hall and won.

It’s Sunday, and the parishioners of Faith Deliverance Temple are singing the Lord’s praises.

They are clapping hands, pumping fists and shaking tambourines. Some sing with their eyes closed and heads thrown back, rocking as they hold their hands high.

Among them is Theasa Chavers. She is here with her 8-year-old grandson, as she is every Sunday.

“When I started coming to this church I was homeless. I was staying at the coalition, which is right around the corner, and I was on drugs. I was on drugs for over 30 years.”

Now Chavers is clean and seeking a degree in social work so she can be a drug counselor. She credits Faith Deliverance Temple for her recovery and can’t imagine Parramore without it.

“If it was to leave I believe a lot of people would suffer, you know, soulwise, with their souls. People just walk by and something can be going on with their lives, and they come up in here and hear the word of God and it can change the way things are going on in their lives.”

Parishioners like Chavers are why Faith Deliverance Temple stood fast as city leaders sought to seize its land for the stadium where the Orlando City Soccer Club will play next season.

“We fasted. We prayed. We uplifted each other.”

The city had filed an eminent domain petition, and the congregation was praying for a miracle.

“We were able to relate it to many many many battles in the Bible. There actually is a specific case in the Bible that talks about eminent domain. King Ahab and Jezebel and wanting to acquire a vineyard that belongs to someone else.”

In the end the city dropped its petition. Already the litigation had delayed the stadium’s construction, forcing the Orlando City Soccer Club to play its inaugural season this year as a major league team in the Citrus Bowl. The city relocated the new stadium a block west, leaving the church in its shadow. Construction is scheduled to be complete by the end of next year.

Faith Deliverance Temple is situated in the heart of Parramore, midway between the Amway Center where the NBA’s Orlando Magic play and the weedy vacant lots where the 25,000-seat stadium will be built. City leaders envision these economically depressed blocks as a sports and entertainment corridor lined with bustling restaurants and retail stores.

But today the sand-colored stucco church stands alone on its side of the street.

Williams’ parents established the non-denominational church in 1969 and eventually moved it to Orlando, where the congregation held fish fries and car washes to raise money to build its sanctuary. His oldest sister is pastor, after his father died in 1997.

“My youngest sister named Tracy, she sat over in the corner. Her husband John, he led the praise team. Their son Robert is the drummer. My nephew William is the keyboardist.”

Warren Rainge worships at the church with his mother, kids and grandkids, but for him everyone here is family.

“Before this church I was not saved. I was living in the streets, selling drugs, doing all the things that people do in the world. But coming down to this ministry, it’s changed my life completely around.”

Brittany Alexander, 17, has been a part of the congregation since she was born. When her father suffered a stroke she found strength in her fellow parishioners. He survived, but she grows emotional now remembering the ordeal.

Williams uses words like “family-run” and “self-built” to describe Faith Deliverance Temple and says parishioners were too emotionally invested in their location to abandon it.

The city had offered the church $4 million for its land, much more than its appraised value. The congregation wanted $15 million. Some accused the church of greediness. But Williams says the congregation’s stand never was about the money.