Weekend Edition: In ‘Parker Looks Up,’ A 2-Year-Old Shares A Moment With Michelle Obama 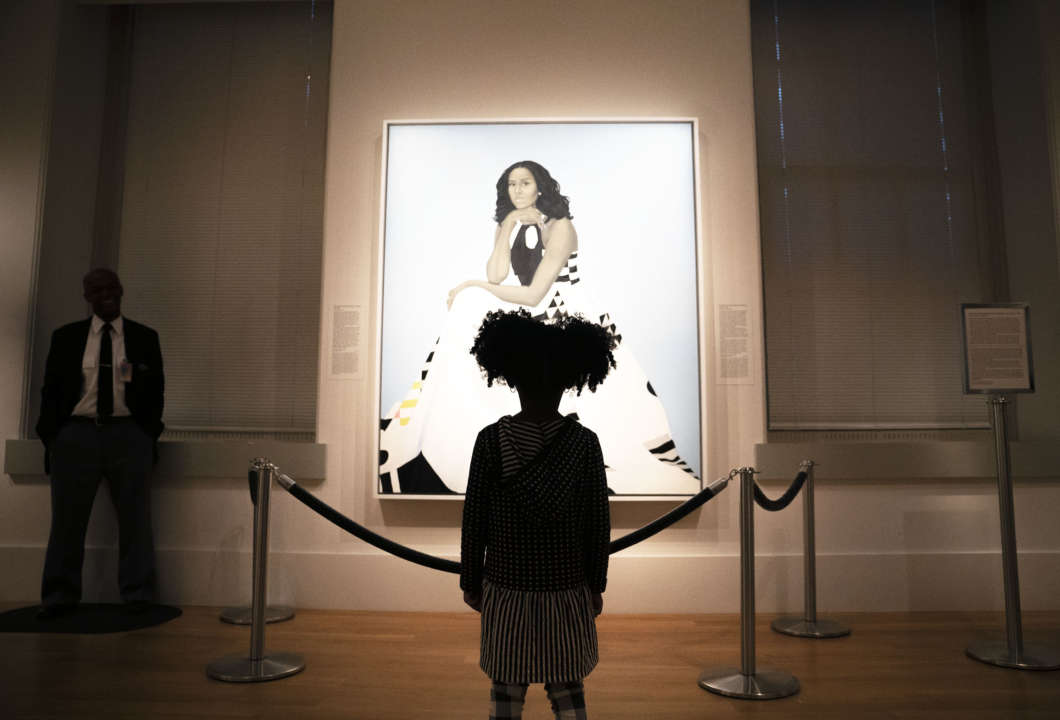 In the spring of 2018, 2-year-old Parker Curry visited the National Portrait Gallery in Washington, D.C., with her mom, her sister and her best friend. They saw a lot of artwork that day — but it was Amy Sherald’s portrait of first lady Michelle Obama that made Parker stop in her tracks and look up in awe.

“The portrait of the first lady Michelle Obama loomed before me,” Parker recalls. Now 4, Parker says the painting made her feel inspired. Also, she adds, Michelle Obama is now her friend.

That’s because Parker became a viral sensation when a fellow museum-goer took a picture of her standing there, spellbound. Less than a week later, Parker got to meet – and dance — with Obama.

The experience has inspired a picture book — Parker Looks Up — written by Parker and her mom, Jessica Curry Morton, and illustrated by Brittany Jackson.

“It’s fun working with you, too,” Curry Morton replies.

In Parker Looks Up, Jackson depicted a number of the Portrait Gallery’s famous paintings. She says it was a challenge to translate these artworks into a book for kids.

“Naturally I want to do everything justice and show respect to Amy Sherald …” Jackson says. “I just drew it in my style which is just a little bit cartoonized or more playful.”

Jackson depicts Parker’s journey through the museum in vivid colors. And there was one other technique she used to add “a little extra character” to the book.

“Whenever Parker is spellbound, or she sees something that is inspiring to her, you see these sparkles, and these little confetti pieces,” Jackson says. Attentive readers will notice that the pieces of confetti match the colors from Michelle Obama’s dress.

These illustrations “make the story,” Curry Morton says. She remembers watching 2-year-old Parker looking up at Sherald’s portrait of Obama and says Jackson’s images bring “the magic of that moment back to life again.”

Jackson is familiar with that stop-in-your-tracks, spellbound feeling.

“I know what it feels like to be young and to see something that inspires you,” she says. “That’s part of the reason why I got into doing illustrations is because I was awestruck by other artists’ work.”

“When I look at that picture today I smile and get teary eyed,” Curry Morton says. “Because it’s a moment that will hopefully inspire children and people for many, many generations.”

Barrie Hardymon edited this interview for broadcast. Beth Novey adapted it for the Web.