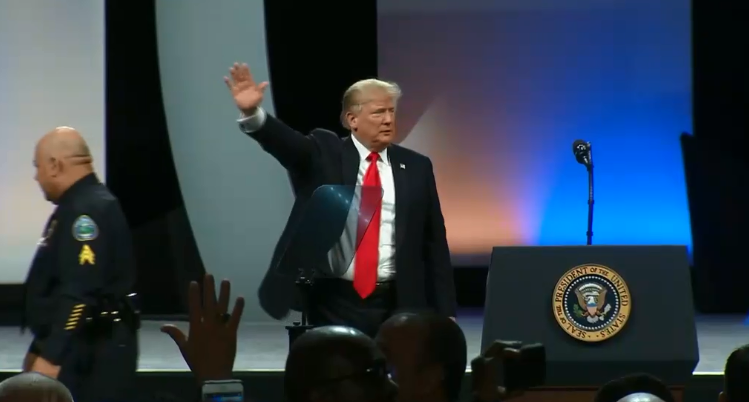 President Donald Trump speaks to law enforcement officials at the International Conference of Chiefs of Police at the Orange County Convention Center.

President Donald Trump said his administration will work to increase safety for law enforcement officers. The President spoke Monday to the International Association of Chiefs of Police at the Orange County Convention Center.

He applauded the work of law enforcement and said his administration would work to increase officer safety.

One of the ways to do that, said Trump, was to reinstate the controversial “stop and frisk” policy in places with incidents of increasing gun violence, like Chicago.

Chicago police dispute Trump’s claims and said last week that there have been 102 fewer homicides and nearly 500 fewer shooting victims in the city this year, compared to the first nine months of 2017.

The Orange-Osceola State Attorney faced criticism when she decided not to pursue the death penalty in the fatal shooting of Orlando Police Lieutenant Deborah Clayton.

Trump called Governor Rick Scott a champion for law enforcement. ““I will tell you Rick has been incredible when it comes to law enforcement. Anytime you need funds from the federal government he’s on the phone.”

Scott, along with Florida’s Attorney General Pam Bondi, met with the President when he arrived on Air Force One. Trump thanked Orlando Police Chief John Mina and the Orlando Police officers for provided security during the visit. The 125th annual IACP conference wraps up Tuesday.