In Key 2019 Races, Activists Gear Up For Big Fight Over Abortion 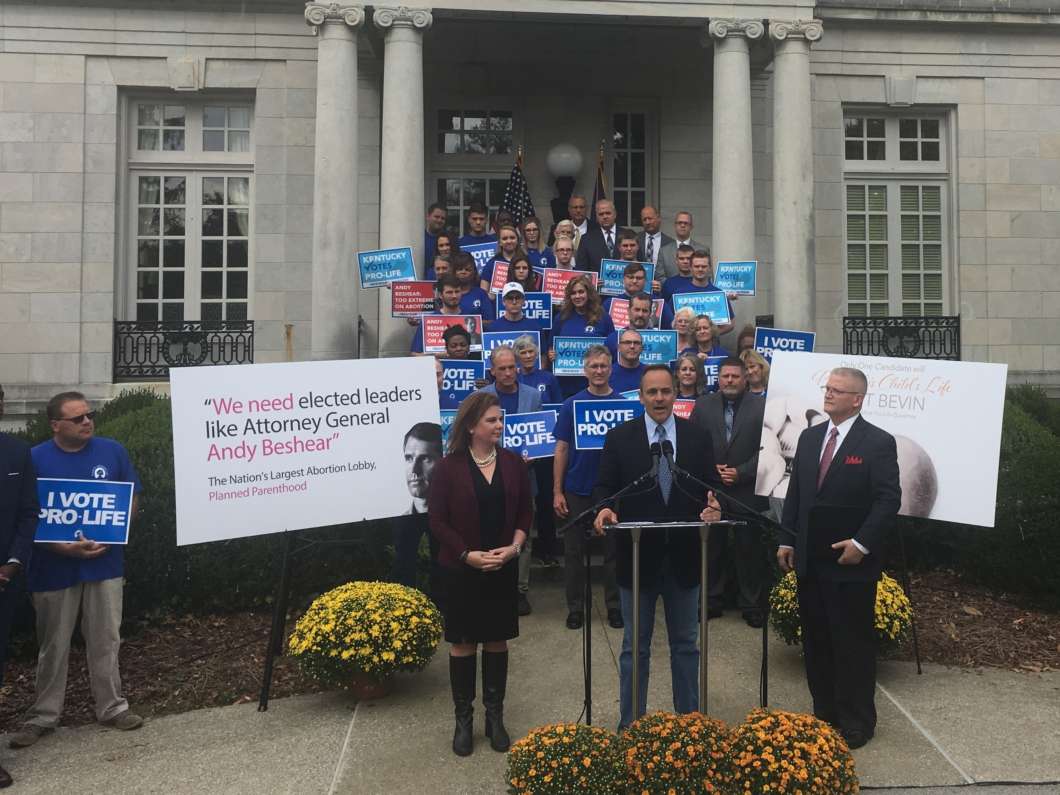 On a recent, cloudy fall afternoon, Kentucky Gov. Matt Bevin stood outside the governor’s mansion in Frankfort, flanked by a couple dozen activists in blue T-shirts, holding signs that read, “I Vote Pro-Life.”

“It took me a while to figure out why I keep seeing these blue T-shirts,” Bevin joked as he turned to the volunteers. “I wasn’t sure who you were, but I’m just grateful to you.”

These activists have been door-knocking across Kentucky on Bevin’s behalf, to reach 200,000 voters before the election on Nov. 5.

The Susan B. Anthony List, a national anti-abortion rights group is organizing the effort. The organization has worked to elect conservative U.S. senators and helped push through the confirmation of President Trump’s Supreme Court nominees, Neil Gorsuch and Brett Kavanaugh.

SBA List President Marjorie Dannenfelser was at Bevin’s event to endorse the governor and other Republicans running for statewide office. She and anti-abortion rights activists like her say they are supporting politicians who will lead Kentucky and other states “into this next chapter of the pro-life movement, which is the most important chapter of the pro-life movement since Roe vs. Wade,” she said.

For the first time in decades, the Supreme Court may be on the verge of substantially rolling back the right to an abortion guaranteed in the 1973 Roe v. Wade, and others. A change like that would governors and state lawmakers the final say for women living in their states.

Bevin has been a consistent and vocal opponent of abortion rights in Kentucky. He’s accused his Democratic opponent, Kentucky Attorney General Andy Beshear, of taking “blood money” because of his support from abortion rights groups.

Bevin signed a law this year that bans abortion as soon as cardiac activity can be detected. That law is currently tied up in litigation. At his event, Bevin told supporters he’d like to go further. “It wouldn’t bother me one lick if there wasn’t an abortion provider in this state. It wouldn’t,” Bevin said. “Our state wouldn’t be less well-served by that.”

Bevin may need support from anti-abortion rights activists as he runs for re-election. He’s one of the least popular governors in the country, known for an abrasive style and for clashing with teachers’ unions over their pensions.

Bevin is facing a formidable challenge from Beshear. Some prominent Republicans are breaking with Bevin to back Beshear.

A recent retiree from Lexington, Chuck Eddy, is leading a volunteer group for Republicans who support Beshear. He’s going door-to-door handing out fliers provided by the Beshear campaign. Eddy says he opposes abortion in most cases, but that Kentucky already has multiple abortion restrictions on the books.

Eddy believes Bevin is using abortion to try to distract voters from other issues.

“He’s pushing that so much because he doesn’t have a local story to tell,” Eddy says. “People are so unhappy with what he’s doing on education, healthcare, and how he talks, that they just don’t want him.”

Against that backdrop, abortion rights opponents are trying to help Bevin stay in office.

The SBA List is spending $750,000 in Kentucky to back Bevin, including digital ads, mailers and teams of door-to-door canvassers.

One door they knocked on recently belonged to Mark Randle, a pastor of a church in Lexington. Randle said he thinks Bevin has made “a million mistakes” — including his fight with teachers, but he still supports him, in part because of his views on abortion.

“If he weren’t pro-life, I wouldn’t vote for him at all,” Randle said. “So that is a game-changer there.”

Al Cross, a longtime Kentucky journalist and political columnist, said the abortion issue could help Bevin in this conservative state.

“Abortion plays a bigger role in the governor’s race this year than it ever has,” Cross said. “Bevin needs, badly, a base turnout among people who ought to be voting for him – many of whom are not because of his pugnacious personality.”

In Virginia, a similar fight is playing out in another off-year election, for control of the state legislature. Republicans narrowly outnumber Democrats in a state that’s trending increasingly blue.

SBA List has sent out mailers attacking half a dozen Democratic state lawmakers who supported a failed proposal earlier this year to remove some restrictions on third-trimester abortion.

Abortion rights groups are fighting back – including both Planned Parenthood and Emily’s List, the latter of which is spending about $2 million on Virginia legislative races this year.

In an interview, Dannenfelser of SBA List said the 2019 elections are the beginning of a larger push on the abortion issue in political campaigns to come.

“We are hoping and planning that there’s gonna be a shift, where governors have more say – with their legislatures – over what abortion law is,” she said. “The left knows that; we know that.”

Glen Halva-Neubauer, a politics professor at Furman University, said the Supreme Court is likely to move in a direction that puts state legislatures and governors “right at the crux” of setting abortion policy – and that will be reflected in political campaigns for those offices.

“I think after many years of being relatively dormant as an issue, we are going to see a next big debate over abortion,” Halva-Neubauer said. “And it’s going to infuse our politics in a way that we haven’t seen, probably, for 15 or so years.”