In Jezero Crater, NASA’s Next Mars Mission Will Search For Ancient Signs Of Life 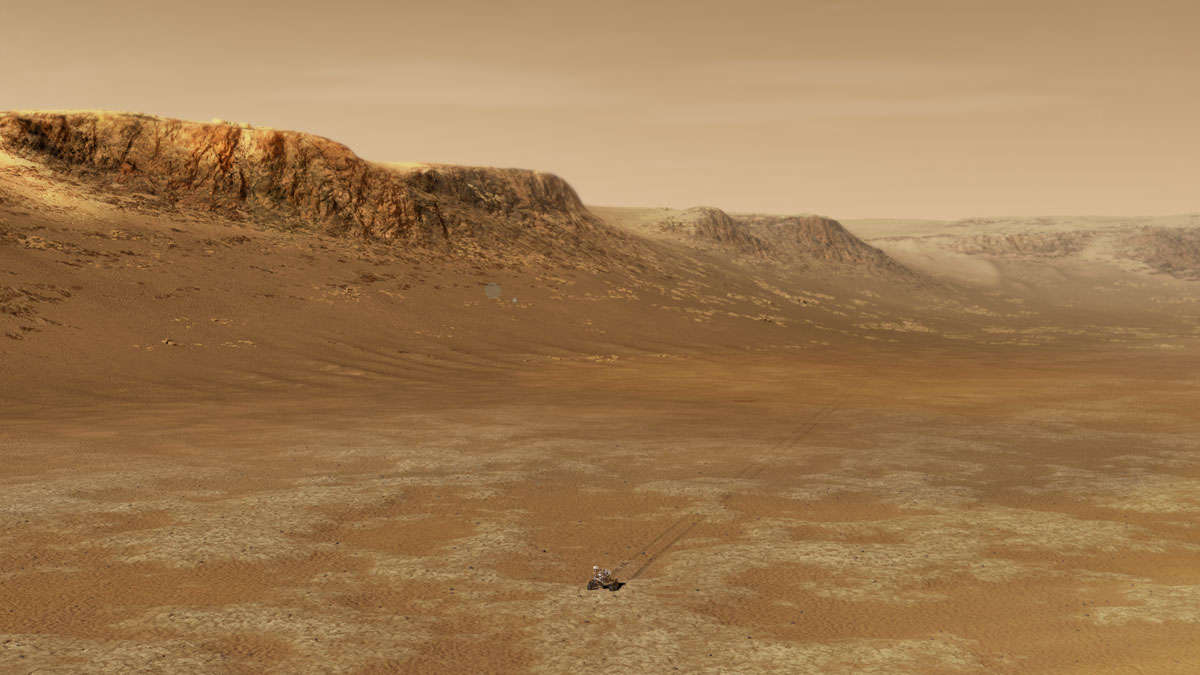 An illustration of NASA’s Perseverance rover exploring inside Mars’ Jezero Crater. The 28-mile-wide (45-kilometer-wide) crater is located on the western edge of a flat plain called Isidis Planitia, which lies just north of the Martian equator. Photo: NASA/JPL-Caltech

NASA’s newest Mars rover is set to touch down on the red planet Thursday after a seven month trip through the solar system. It’s mission: Search for ancient signs of life on Mars.

The Perseverance rover will scream through the Martian atmosphere Thursday afternoon before a rocket-powered crane gently drops the dune-buggy sized robot onto the surface.

Because of a delay in communication between Earth and Mars, the spacecraft will land itself and radio back to mission control. NASA engineers and scientists call this delay the “seven minutes of terror” since critical mission milestones happen faster than the spacecraft can radio back, leaving spectators waiting in anticipation for the vehicle to phone home.

If all goes as planned, Perseverance will first unpack and checkout its suite of science instruments including cameras and lasers to examine the Martian surface for signs of ancient life. The landing site Jezero crater is an ancient river delta and scientists here on Earth think it could contain evidence of early Martians.

“That’s what we’re interested in exploring for a variety of reasons. One of which is the search for organic matter,” said University of Florida geologist and participating scientist Dr. Amy Williams.

She and other astrobiologists will use instruments on the rover to search for these organic compounds in the once submerged terrain and analyze them, looking to see if they were created by former life living on the planet.

“Understanding our place in the universe, whether we truly are alone, whether life is extraordinarily rare or whether it is ubiquitous in the universe, is one of the most compelling questions I can think of in science,” said Williams.

NASA’s Perseverance will also collect samples of the Martian surface and process them for a future return mission. In the next decade, NASA plans to send a follow-up mission to collect the samples, launch them into Mars’ orbit and then send them back to Earth. It will be the first time scientists will get their hands on Martian dirt.

A tiny helicopter is hitching a ride underneath Perseverance. Engineers will use the chopper called Ingenuity to prove that controlled and sustained flight is feasible in a Martian atmosphere.

Perseverance joins two other missions arriving at the red planet this month — the Hope probe from the United Arab Emirates and Tianwen-1, an orbiter-rover combo sent by the Chinese space agency, arrived last week.