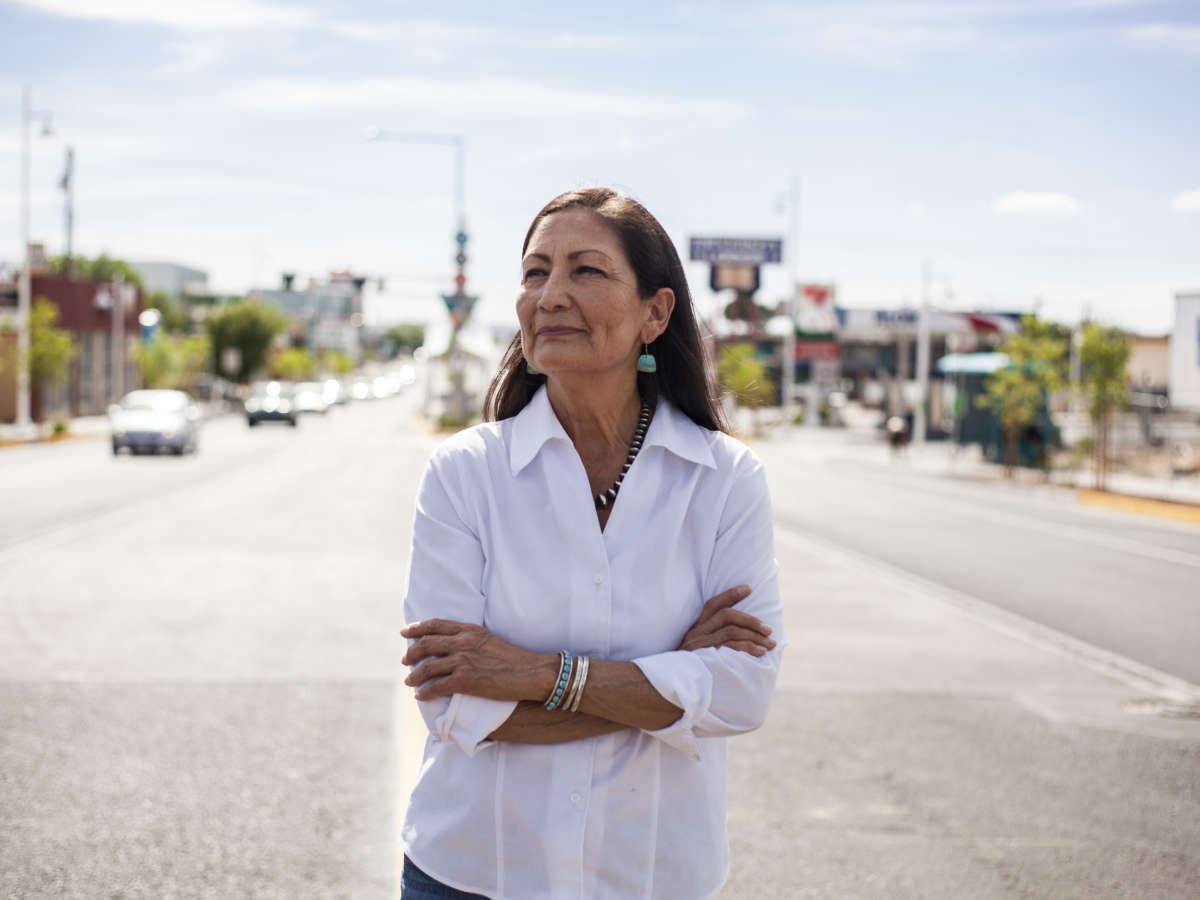 In a historic first, President-elect Joe Biden is expected to tap Rep. Deb Haaland, a member of the Laguna Pueblo in New Mexico, to lead the Department of the Interior.

If confirmed by the Senate, Haaland would be the country’s first Native American Cabinet secretary. Fittingly, she’d do so as head of the agency responsible for not only managing the nation’s public lands, but honoring its treaties with the Indigenous people those lands were taken from.

“She understands at a very real level — at a generational level, in her case going back 30 generations — what it is to care for American lands,” says Aaron Weiss, deputy director of the Center for Western Priorities.

Haaland’s nomination is a win for tribal governments, environmental groups and some progressive lawmakers who had been lobbying for the New Mexico lawmaker to lead the Department of the Interior. Her fellow House Natural Resources Committee member and rumored Interior candidate, Raúl Grijalva (D-Ariz.), wrote a letter to the Congressional Hispanic Caucus recommending Haaland for the post.

“It is well past time that an Indigenous person brings history full circle at the Department of Interior,” he wrote.

It’s not the first time Haaland has made history. In 2018, she became one of the first two Native women in Congress, alongside fellow Rep. Sharice Davids of Kansas.

The Interior Department upholds the federal government’s responsibilities to the country’s 574 federally recognized Indian tribes and Alaska Native villages. Its roughly 70,000-person staff also oversees one-fifth of all the land in the U.S., as well as 1.7 billion acres off the country’s coasts. It manages national parks, wildlife refuges and other public lands, protecting biologically and culturally important sites, while also shepherding natural resource development.

The Biden administration is expected to take a much different approach to natural resources than its predecessor, which championed oil and gas development above all else on federal lands. Biden has promised to shift the U.S. away from climate-warming fossil fuels toward renewable energy sources like wind and solar.

In an interview before her nomination, Haaland told NPR that would be her priority, too.

“Climate change is the challenge of our lifetime, and it’s imperative that we invest in an equitable, renewable energy economy,” she said.

A shift in priorities at Interior could have major implications for global climate change and the United States’ outsized contribution to it. About one-quarter of all U.S. carbon emissions come from fossil fuels extracted on public lands, according to the U.S. Geological Survey. That includes emissions from drilling, transporting and refining those fossil fuels before they’re burned.

Haaland’s experience as a lawmaker in fossil fuel-dependent New Mexico, and as the former head of the state’s Democratic party, leaves her well-positioned to navigate that transition, environmental advocates say. The state has one of the most aggressive climate plans in the country.

“You have to understand the complexity of public lands management,” says Demis Foster, executive director of Conservation Voters New Mexico. “And I can’t imagine a better representation of that than here in New Mexico. We have a vast network of public lands. We have extraordinary biodiversity, and we have a very unique cultural heritage.”

State lawmakers also have to balance that, she says, with the “extraordinary force and influence of extractive industry.”

Haaland has echoed Biden in saying that a transition to renewable energy is a job creator, which makes it a no-brainer during the economic uncertainty spurred by the ongoing coronavirus pandemic.

She’s also sponsored a bill in the House that would set a national goal of protecting 30% of U.S. lands and oceans by the year 2030, a plan that the Biden administration has adopted and made a priority for his environmental agenda.

“That would protect our wildlife and boost the restoration economy,” Haaland said, and “undo some of the damage that this Trump administration has done to our environment.”

The Biden administration has promised to undo a number of environmental rollbacks undertaken over the past four years, and Interior will play a key role.

Under their leadership, national monuments were cleaved, opening up millions of acres of formally protected land to development. Millions of acres more — onshore and offshore — were made available for oil and gas leasing. Regulations were rolled back on methane emissions and imperiled species protections, among others.

Haaland was a vocal critic of many of those moves. As chair of a House Natural Resources subcommittee that oversees Interior, she has led hearings on everything from the Trump administration’s handling of national park reopenings during the coronavirus pandemic to its treaty-obligated communications with tribal governments for projects that impact their lands.

“Tribal consultation is basically nonexistent during this Trump administration,” Haaland said. “President-elect Biden has promised to consult with tribes, which I think will help immensely with some of the environmental issues that he wants to address.”

The Intergovernmental Panel on Climate Change found that indigenous people are disproportionately vulnerable to climate change in the U.S. Alaska Native villagers and a Native American community in south Louisiana are among the first climate refugees in the country. Both are being relocated due to rising seas.

“Fossil fuel development, uranium development, clearcutting of forests — all these things that have been happening on tribal lands were exacerbated under the [Trump] administration and need to be looked at,” she says.

As a member of the Mandan, Hidatsa and Arikara Nation in North Dakota, White says, she’s seen the impacts of fracking and other development firsthand.

She thinks it will be impactful to have a Native American woman like Haaland, who understands the complex government-to-government relationship between Indigenous people and the U.S., leading the Department of the Interior.