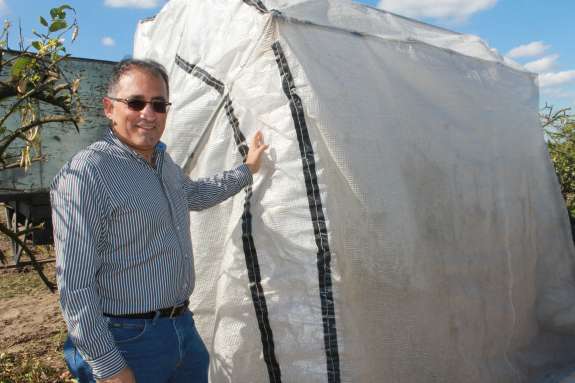 Reza Ehsani hopes his heat treatment can give growers time until a permanent solution is found. Photo by Amy Green

Hundreds of researchers from across the globe are in Orlando this week to talk about one thing, citrus greening.

Some of the most promising research comes from tiny Lake Alfred, Fla., the global front line in the fight against greening.

In a grove left barren and bony by greening, a tractor moves from one sickened tree to the next. The tractor stops, and a tent the size of a camping tent unfolds from its side. The tent lowers and fills with steam. Then it rises again. Steam curls, and the tree drips with moisture.

Reza Ehsani is experimenting with heat as a treatment for greening.

“This bacteria just cannot handle this heat, and that’s all it is.”

He says the treatment isn’t a cure, but it can give a tree about two more years.

“I’m hoping that by that we are able to keep the growers in production long enough until we have a more permanent solution.”

It’s among the new research underway at the University of Florida’s Citrus Research and Education Center in Lake Alfred, outside of Lakeland. The center is the world’s largest research center devoted to a single crop. Michael Rogers is interim director.

“At the end of the day if growers stay in business it’s because we’ve been able to find a way to live or manage with citrus greening disease, because that is the No. 1 limiting factor for growers right now.”

Here in the state’s citrus growing heartland all of the center’s 200 faculty and support staff are involved in the search for a cure for one of the worst diseases to hit a U.S. crop.

Some of them will present this week in Orlando at the International Research Conference on Huanglongbing, the name for the disease in China where it’s believed to have originated.

For Florida the crisis is existential. Citrus is the leading crop in the state, which is second behind Brazil in oranges grown for juice. Since greening appeared a decade ago production has plunged from 300 million boxes a season to 103 million this year, the worst ever.

Greening is spread by a tiny insect called a psyllid. The disease weakens the trees. Most die within a few years. Rogers says some of the first symptoms appear in the tree’s canopy.

“So what you see is a lot of nutritional type deficiencies in the upper canopy. The canopies start to thin. But the most important thing for us is the fact that the fruit becomes unusable. It gets small in size. It never really truly ripens up, so it can’t be used for juice production or fresh fruit production.”

In Lake Alfred researchers are attacking the disease from every angle. Kirsten Pelz-Stelinksi is working on developing a whole new psyllid.

“It’s actually called the New Psyllid Project, that is just less capable of moving this pathogen around, and grow that population to a size where we can release it, and it will be competitive in the environment and it will displace the population of psyllids that are currently out there.”

But Rogers says researchers still haven’t discovered how to grow the bacteria that causes the disease in the lab.

“And that’s a real key problem because all the strategies and approaches to curing this, we don’t have the organism in the petri dish to work with.”

What everyone wants most is a tree that is resilient against the disease. That’s what Fred Gmitter is working on. He’s part of a team experimenting with cross-breeding varieties of citrus trees that are less sensitive to greening.

The researchers found some varieties like Sugar Belles fare better against the disease than others, like Honey Tangerines. Through cross-breeding they’ve developed a new tangerine that Gmitter says growers are calling, Bingo.

“It’s what they’ve been looking for, a beautiful, seedless, easy-to-peel, fantastically delicious tangerine that’s adapted to the Florida environment, and if it holds up against greening then really, bingo.”

Gmitter says it isn’t a cure. He says eventually the team will develop new and even better varieties, and as growers replant the trees that succumb finally greening will be eradicated.