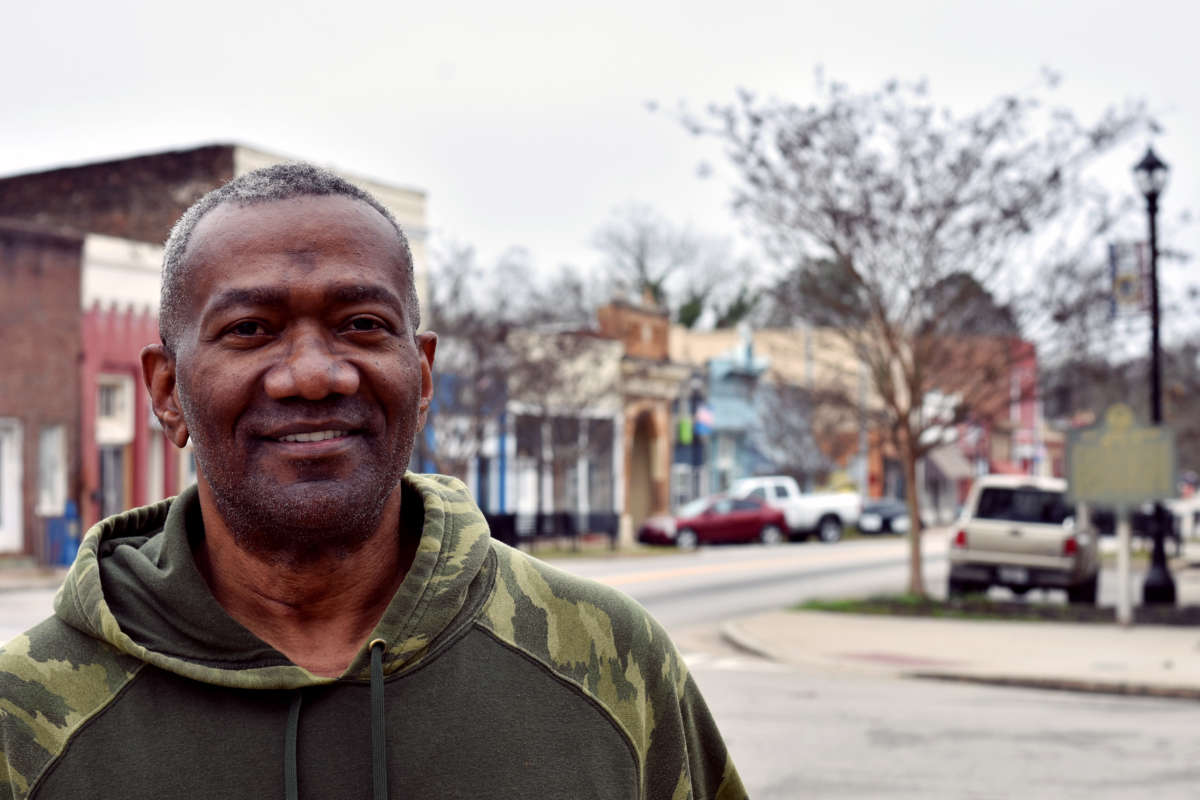 Johnny Thornton says there was a growing conflict between Barry Fleming's work as a lawmaker and for Hancock County.
Image credit: Stephen Fowler

Long before Republican Gov. Brian Kemp signed a 98-page law that enacted drastic changes to election rules in Georgia this week, some lawmakers were already facing pushback amid an inflamed debate over voting rights.

In rural Hancock County, residents pushed the county commission to cut ties with its county attorney earlier this month because of his role as a state lawmaker, leading the efforts to craft voting changes.

Hancock County is about 100 miles east of Atlanta and one of the poorest in the country. Three-quarters of its residents are Black, three-quarters vote Democratic and, until a few weeks ago its county attorney was Barry Fleming, a white Republican lawmaker who chaired the House Special Committee on Election Integrity.

His day job is an attorney, where he specializes in representing local governments across east Georgia, like Hancock County.

Johnny Thornton, a retired Drug Enforcement Administration agent who owns a sprawling catfish farm just outside the county seat of Sparta, said there was a growing conflict between Fleming’s work as a lawmaker and for Hancock County.

“He knows how important absentee voting and early voting is to this community,” he said. “And he goes and introduces legislation to make it harder, more difficult for the very people to vote that are paying him as county attorney!”

Thornton said he believes that an attorney should be an advocate, not an adversary, and others agree. Earlier this month, Hancock County Commissioners voted 4-0 to show him the door.

Fleming declined to comment for this story but has said repeatedly his legislation was aimed at restoring confidence in Georgia’s election system — though other Republican lawmakers in Georgia spent months undermining the system with false claims of election fraud and malfeasance with absentee ballots.

One bill Fleming introduced, HB 531, would have curbed Sunday early voting, restricted mail-in voting, even made handing out food and water to voters a misdemeanor crime.

Sitting between the courthouse and a Confederate monument in downtown Sparta, Marion Warren said that bill got people around Sparta talking about who was responsible.

“We realized that Barry Fleming was indeed the representative that was trying to shuffle [HB] 531,” he said. “And I said, ‘Well hell, I’ve been fighting him since 2015!’ ”

Fleming was county attorney that year when about 20% of Sparta’s voters — all Black — had their voter registrations challenged before a mayoral race. One of those was Johnny Thornton, who said he was targeted because of his plans to run for the county commission.

Only a small handful were purged, thanks in part to a federal lawsuit filed by Thornton and other Black voters.

Warren knows his way around local elections, serving as former voter registrar for majority-Black Sparta — until he says a 2019 law authored by Barry Fleming got rid of that position, too.

While Republicans have proposed hundreds of restrictive bills across the country, Warren says the particular measures discussed in Georgia are personal for Black people like himself that experienced Jim Crow laws firsthand.

“And now I’m here again 50 years later fixing to do the same thing again,” he exclaimed. “You got to stop … it gotta end.”

Warren points to a dusty sidewalk outside a row of shops where he said he was hit with a fire engine’s water hose, another building where he could get a hamburger — but only from the back door. He said he did not know the county courthouse had a front entrance until he was 14.

So while Georgia’s newest voting law dropped most of the extreme measures — like ending no-excuse absentee voting, effectively banning Sunday “souls to the polls” events and ending automatic voter registration — a time where Black people faced incredible voting restrictions is a memory away for Warren and other Sparta residents.

Warren said Facebook posts and meetings with community members helped mobilize action before the county commission, and now says other local jurisdictions that have hired Fleming as attorney are considering dropping him, too.

Johnny Thornton said ousting a state lawmaker as their county attorney might not do much to help the county long-term — but he hopes it sends a message that voters are paying attention to efforts to block the ballot.

“We might be disadvantaged and underserved, but we are not complete fools in Hancock County, Georgia,” he said. “We felt like to make a mark in history we wanted to be the front end of the donkey and not the rear end.”

In the short term at least, it appears that some Republicans are paying attention. The bill signed into law Thursday reversed course on some of the harshest measures, keeping no-excuse absentee voting and actually expanding in-person early voting access.

Beyond Sparta, Democrats and voting rights groups have vowed to fight the changes this year and during the 2022 election cycle, where Gov. Brian Kemp faces a reelection battle, and at least one lawsuit is already filed in federal court.