In ‘Florida Project,’ A First-Time Actress Plays A Single Mom Doing Her Best 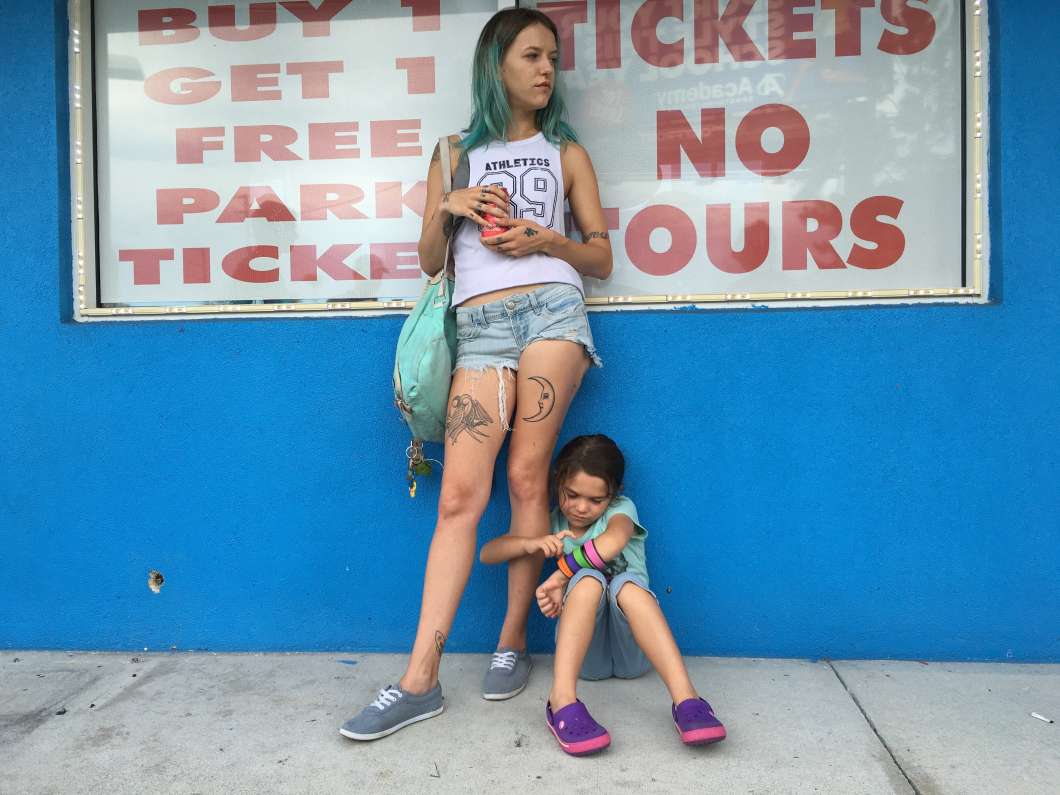 If you’re into Disney trivia, you might know that Walt Disney’s idea for a new theme park in Orlando, Fla., was initially called The Florida Project. That’s also the name of a new film set in a world that seems very far away from the magical kingdom: a budget motel where families live teetering on the edge of homelessness.

At the heart of The Florida Project is a precocious little girl named Moonee (Brooklynn Prince) who spends her days creating her own magic with her friends and exploring the motel’s off-limits rooms. Moonee’s 20-something mother, Halley, is played by newcomer Bria Vinaite (who director Sean Baker discovered on Instagram) and Willem Dafoe plays the harried motel manager. Baker debuted The Florida Project at the Cannes Film Festival to much acclaim.

Baker’s previous film, Tangerine, also made a splash: It told the story of transgender sex workers in Los Angeles, and Baker filmed it entirely on an iPhone. He says he actually wanted to make The Florida Project before Tangerine, but couldn’t get funding. “And Tangerine basically opened the doors for us, found us financing to make this.”

Baker and Vinaite spoke to NPR about what drew them to this project.

On where Baker got the idea for the film

Sean Baker: My co-screenwriter, Chris Bergoch, he brought me this topic way back in 2011. His mother had recently relocated the Kissimmee/Orlando area. He is very much in love with Disney; he knows everything Disney. So I think he came across articles, local news articles, about the fact that there were families with children living in budget motels outside of the parks. And I found it fascinating; I found it quite sad; I found it to be a subject that I thought we could dramatize. …

I had never even heard of the term “hidden homeless” before. … It’s not just Orlando and Kissimmee; it’s a national issue, it’s a national problem. But it was that juxtaposition between children growing up in motels and what’s considered the happiest place on earth for children, a place designed for children. So we said, you know, if we could show that it could happen here, it could happen anywhere.

On what Vinaite was posting on Instagram when Baker discovered her

Bria Vinaite: At that point in my life I was living in Miami and I was working from home, so I just had a lot of free time and I didn’t have a lot of friends. So I would make these videos to kind of entertain myself because I didn’t really have a lot of people to talk to. And I would literally just dance around and crack jokes and like talk to myself. … And somehow Sean stumbled upon one of those videos and it made him laugh, thankfully, and he reached out. …

When he first emailed me and told me who he was, I watched all his films like that same day. … I had to YouTube some of his interviews so that when I got on the phone with him I could cross-check the voice. You know, I had to take some sort of precautions. And then a week later he flew me out to Orlando to audition. I met Brooklynn, who plays Moonee, and me and her just instantly connected.

On what drew Vinaite to the character of Halley

Vinaite: I read a lot of books and it was my first time reading a script and it made me cry the first time I read it. And for me to feel such strong emotion through words was really special to me. And I really respected the fact that as much as Halley is struggling and going through all this, she never once takes it out on her daughter or puts the stress on her daughter. And she doesn’t really have anyone around — she doesn’t really have friends or family — so for her to be dealing with taking care of a child on top of all the stresses of her life, and to kind of keep it to herself and not, you know, put it on others was really admirable to me.

On whether Halley is a bad mom

Vinaite: She’s definitely not a terrible mother. She’s doing things that she doesn’t want to be doing to herself in order to provide for her daughter. And if that’s not being selfless, then I don’t know what is. … I really respect that she does what she has to do. …

Baker: And in many ways, this is what we wanted out of this film: We wanted to create this discussion. I mean, this is Bria’s opinion on it. I’ve talked to audience members who’ve come out and said, “Ooh, that mom doesn’t know what she’s doing.” But the goal is to create a discussion and also, hopefully, create at least empathy for her.

Whether or not you agree with her parenting skills, my hope is that they look at this character of Halley, they say: She was probably 15 when she had Moonee. … No formal education. No family support. No safety net. She’s unemployable. I mean, she’s in basically survival mode, and there are only so many different ways that she can act. So my hope is that at least, no matter what you think of her character, there’s at least empathy for her.

Alexi Horowitz-Ghazi and Jennifer Liberto produced and edited this interview for broadcast, and Nicole Cohen adapted it for the Web.