In Florida, A New Governor Speaks The Words, “Climate Change” 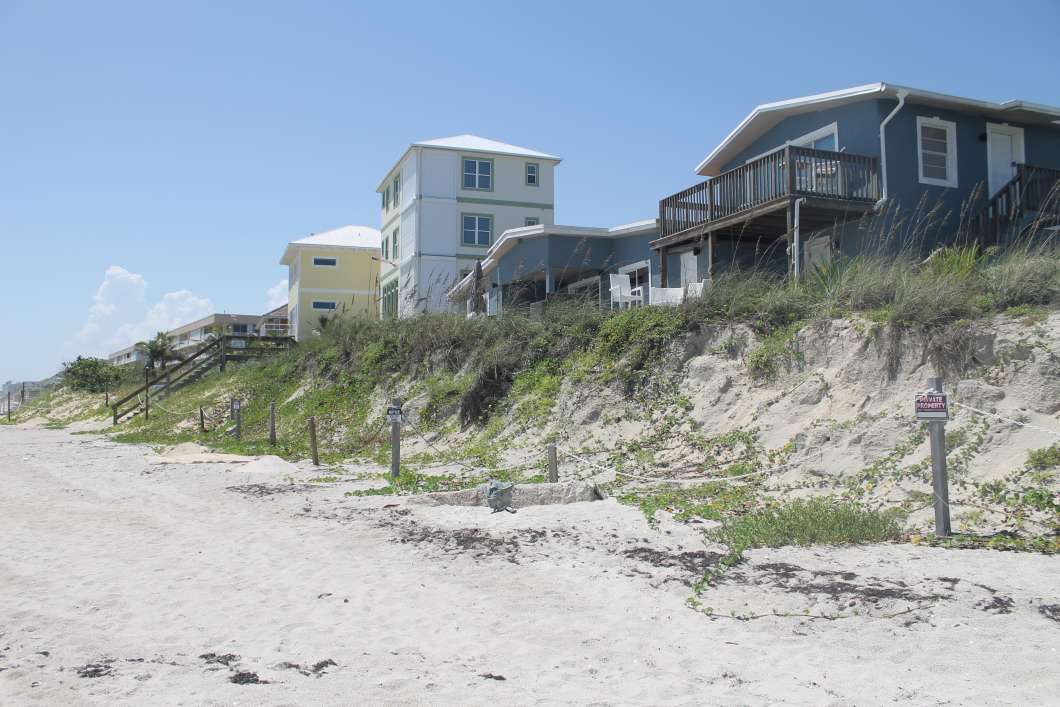 In Satellite Beach homes perch atop a sand dune, left exposed after a series of storms and hurricanes washed away a sea wall. Photo by Amy Green

A ban in Florida on the words “climate change” appears to be ending.

The DeSantis administration is showing new leadership where state government has been absent in the past.

Gov. Ron DeSantis has wasted no time since taking office in January establishing the environment as a priority.

The Republican governor elected with President Donald Trump’s endorsement has announced plans for a chief resiliency officer. He also says he’ll establish an Office of Resiliency and Coastal Protection. And he named the state’s first chief science officer. Here is DeSantis this month in West Palm Beach making that announcement.

“This idea of – quote – ‘climate change’ has become politicized. My environmental policy is just to try to do things that benefit Floridians.”

Did you notice the choice of words there? “Climate change.”

It’s a big change from former Gov. Rick Scott, who was elected to the Senate in November. Not only would Scott say he was “not a scientist” when asked about climate change. His reported ban on the words from state agencies became a national punchline among late night comedians like Jon Stewart, former host of The Daily Show. Rather than “sea level rise” employees reportedly were told to say, “nuisance flooding.”

“I would say we’re seeing a policy on climate change in Florida finally,” says Thomas Ruppert of the research organization Florida Sea Grant.

He expects the change will mean new resources and support for local governments. Municipalities like Miami Beach are installing pumps and raising roads, but he says small- and mid-sized communities are most in need.

“Because they don’t have the financial resources to delay what may become inevitable in some areas, which is relocation away from the coastline due to sea level rise.”

That includes communities like Satellite Beach, situated not far from Kennedy Space Center on a barrier island between the Atlantic Ocean and Indian River Lagoon. City Manager Courtney Barker says already there are plans to move the fire station and other public buildings to higher ground.

“We are a highly eroding area, and that is designed by the DEP and the state of Florida. And I think you’ll see over time the same areas being affected over and over again.”

She says the city also would consider buying out vulnerable homeowners but doesn’t have the money.

“These properties are worth millions of dollars, and I think once they are impacted like that you’re still looking at hundreds of millions of dollars. And our yearly budget is $12 million, and so we’re just not in a financial position to be able to do that, and so that’s why you need a state fund for those types of issues.”

Whatever help the DeSantis administration can deliver she says it’s refreshing just hearing the governor utter the words “climate change.”

DeSantis’ sweeping environmental plan is aimed primarily at toxic algae. Most environmental groups are cheering the action, but for some it doesn’t go far enough. Frank Jackalone of the Sierra Club points out DeSantis’ plan does nothing on emissions.

“He needs to take action now, and what kind of action? Clean energy. He needs to get on the bandwagon for movement toward 100 percent clean energy that will stop pouring all of these millions of tons of carbon into our atmosphere that make our climate worse.”

But for most Floridians hearing the words “climate change” from the state’s top leadership represents progress.