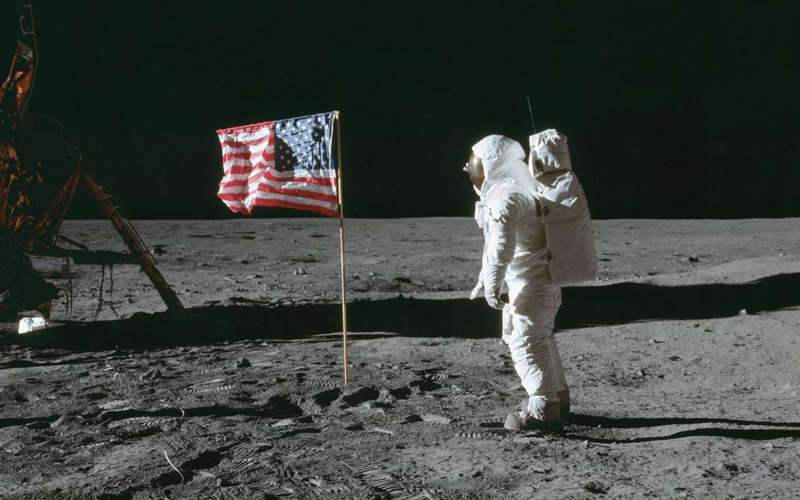 Astronaut Buzz Aldrin on the surface of the moon during the Apollo 11 mission in 1969. NASA plans to send humans back to the moon in 2024. Photo: NASA

NASA is going back to the future. The White House wants to put astronauts back on the moon by 2024. It’s a heavy lift involving a complex interplay of partisan politics, big rockets and unlikely allies.

The 2024 moon mission, called Artemis, is a bold plan that includes expediting development on a more than 300-foot-tall rocket, launching a mini-space station around the moon, and calling on commercial partners to develop a spaceship to land humans on the moon for the first time in nearly five decades. NASA’s going to need all the help it can get.

“The administrator really has a herculean task,” said former Democratic Senator Bill Nelson. The space-policy heavy hitter has been tapped by NASA administrator Jim Bridenstine to help sell the plan.

NASA’s Jim Bridenstine speaks at Kennedy Space Center about the agency’s efforts to return to the moon. Photo: WMFE/Jim Hobart

Artemis is going to cost billions of dollars. Vice President Mike Pence directed the agency on the moon-shot earlier this year. Now the agency is scrambling to come up with the funding.

The expedited Artemis program wasn’t included in the agency’s original $21 billion budget ask for FY2020. NASA required a budget amendment from the White House for the $1.6 billion needed to jump-start the program in the next budget year.

“This isn’t going to be enough,” said Laura Forczyk, a space policy analyst and founder of Astrolytical. The ask is merely a down-payment for Artemis and it will surely require additional funding over the next five years. “It is up to Congress to decide how much to fund NASA. Even though the White House is proposing this extra $1.6 billion, Congress could actually give more  in that request.”

Despite a House appropriations committee drafting a NASA budget slightly higher than requested, the additional $1.6 billion for Artemis is far from certain. That’s because the White House said that money for the moon-shot should come from a $9 billion surplus in the Pell Grant program, a subsidy used by students with a financial need to attend college.

The surplus is prompting questions from Democrats like Florida Congressman Darren Soto. “Why is that? Are enough people aware of the program, are they utilizing it? Are there problems utilizing the program?”

Like other Democrats, Soto wants that Pell Grant surplus to go back into education — not the Artemis program. He said the money could be used for things like absolving student loan debt instead.

On the other hand, Republicans like Congressman Bill Posey think funneling that money into the moon program will have its own educational benefits.

“It’s a heavy lift but so much of this stuff will encourage STEM,” said Posey. “It will get more kids interested in the STEM field, which we are direly in need of right now. Congress will decide whether that’s the appropriate place or there’s another place.”

The amendment request was left out of a House draft budget for agency and a Senate version hasn’t been released yet. The full House could vote on the space budget as early as June 22.

As the budget process moves through Congressional committees, approval of the additional funds to expedite the program is uncertain.

“It’s become a lot less likely Congress will provide the requested extra funds for Artemis, let alone more than the request.” said Forczyk. “There aren’t any champions in Congress yet.”

In the midst of the partisan funding fight, Bridenstine is turning to the man who was one of his most outspoken critics during his confirmation hearing — Bill Nelson.

“He is a true champion for human spaceflight and will add tremendous value as we go to the Moon and on to Mars,” said Bridenstine announcing Nelson’s appointment to NASA’s Advisory Council.

In his new role, Nelson will help make the case for additional funding as well as steer the agency on deep-space endeavors like missions to Mars. At an advisory council meeting last week, Nelson pointed out the agency’s challenges moving forward like the lack of Congressional allies it once had.

“Now, where’s the money? And that’s going to be the task — a very, very tough task for the administrator.”

Even if NASA is able to get the budget amendment funded, as Nelson said it’s still a Herculean task to return humans to the moon. The mighty SLS rocket has faced multiple delays and cost overruns, but the agency is targeting a test launch of the rocket, along with the Orion capsule, on an uncrewed mission around the moon at the end of 2020.

NASA is making progress on other elements of the Artemis plan, too. The agency announced the first company to build parts for the moon-bound space station called Gateway. NASA also awarded contracts to three private companies to begin shipping supplies and science to the moon, and it has solicited proposals for a lunar lander.

With a 2024 deadline fast approaching, Bridenstine will also have to figure out how to fund the mission without taking money from other NASA programs — a pledge he made to NASA employees as the agency unveiled the plan.