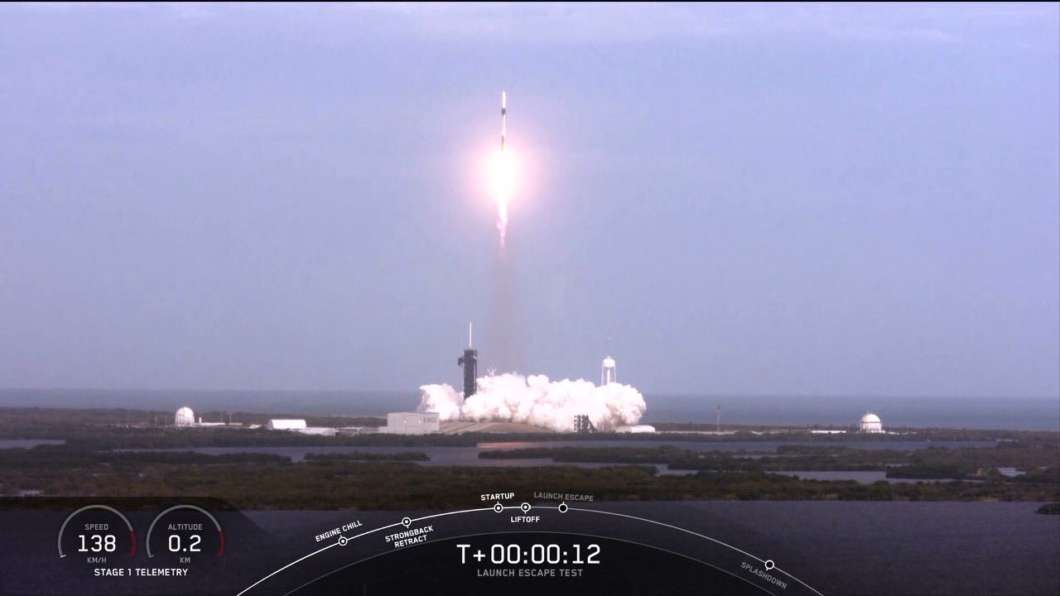 A Falcon 9 rocket lifts off from Kennedy Space Center on a mission to test the Crew Dragon's launch abort system. Photo: SpaceX / NASA

SpaceX successfully completed a test Sunday of a critical safety system on its new spacecraft designed to carry NASA astronauts.

It started like any other launch from Kennedy Space Center until about a minute and a half after liftoff. That’s when engines on the capsule fired, pushing the spacecraft away from the rocket. The Crew Dragon capsule splashed down safely in the Atlantic Ocean.

The rocket’s first stage booster exploded above the Atlantic and a fireball could be seen off the Space Coast.

Crew Dragon separating from Falcon 9 during today’s test, which verified the spacecraft’s ability to carry astronauts to safety in the unlikely event of an emergency on ascent pic.twitter.com/rxUDPFD0v5

The system is designed to protect future astronauts on board in case there’s an emergency mid-flight. It’s the last major flight test for SpaceX before receiving certification from NASA to launch humans.

NASA is working with private companies like SpaceX to ferry astronauts to the International Space Station. Since the retirement of the Space Shuttle program in 2011, NASA has relied solely on the Russian space agency Roscosmos for rides the the station. The agency’s $6 billion Commercial Crew program aims to end that reliance and return human spaceflight to the U.S.

“As far as we can tell thus far, it’s a picture perfect mission. It went as well as one can possibly expect,” said Elon Musk, Chief Engineer at SpaceX.

The test clears the way for SpaceX & NASA’s next step — human launches. Shuttle era veteran astronauts Bob Behnkin and Doug Hurley are slated to ride the Crew Dragon on its first crewed mission as early as April.

“We are thrilled with the progress NASA’s Commercial Crew Program is making and look forward to the next milestone for Crew Dragon,” said NASA administrator Jim Bridenstine.

Musk said the first crew capsule will arrive at Kennedy Space Center at the end of February. SpaceX successfully flew an uncrewed Dragon capsule to the space station and back last year.

The agency is also working with Boeing to develop a human-rated capsule to transport astronauts to the station. During a test flight last month, Boeing’s uncrewed Starliner malfunctioned and the spacecraft was unable to make it to the station. NASA and Boeing created a task force to investigate the anomaly. It’s unclear when Boeing will launch astronauts for NASA.