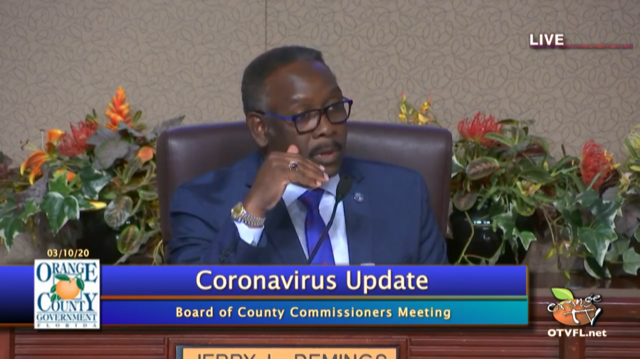 Life across Central Florida slowed Friday as a growing number of closures, cancellations and postponements were aimed at the coronavirus pandemic.

Orange County declared a state of emergency. Leaders said an Orange County resident died in California from COVID-19, after contracting the virus while overseas. The person had been in isolation in California.

“We are recommending that gatherings of 250 people or more be postponed or canceled,” he said.

SeaWorld announced it would close all of its theme parks beginning Monday. The company said the closures would extend through the end of the month. Essential personnel would continue to look after the animals, and rescue and rehabilitation operations also would continue.

Full-time employees would continue to be paid. The closures came after Walt Disney Co. and Universal Studios announced closures Thursday of their theme parks in Orlando and elsewhere.

The pandemic was expected to stretch services for Central Florida’s working poor.

Florida United Way President Jeff Hayward said 46 percent of families were asset-limited and income constrained, but that the number was expected to rise. He said the virus also was expected to affect donations.

“So the number of dollars available fall — at the same time, because of this scenario, the number of requests for services are rising,” he said.

Hayward said the organization would continue to look out for more resources in surrounding communities.

Orlando Mayor Buddy Dyer said he was working with city officials to find out how to properly take care of the city’s homeless population.

He said information about the virus is changing every day — making it harder to implement plans.

“We have a homeless population in downtown and in other pockets that certainly is a population that would be susceptible to a rapid spread of the virus,” the mayor said.

Dyer said the city was focused on stopping the spread of the virus while awaiting state and federal government relief plans.

In Orange County, food banks noticed longer lines as the closures prompted economic anxiety. The pantries asked for monetary donations, as food donations could be contaminated by the virus.

Second Harvest President Greg Higgerson said the growing demand reminded him of the time after the 9-11 terrorist attacks or 2008 economic collapse. He said he was not worried about running out of food, but that the social distancing could complicate the distribution of meals.

“So we’re talking through scenarios like mobile drops where we bring the food out to open areas and people come and get it there without coming out of their vehicles,” he said.

Higgerson said the food bank was getting ready to provide meals for children in case the coronavirus prompted schools to close.

The Villages, a Central Florida retirement community of about 130,000 people, was taking seriously the state’s advice against gathering in crowds.

It largely had shut down its thriving entertainment scene to counter the spread of COVID-19.

Citing recommendations from the governor and health officials, The Villages canceled evening events on the town squares indefinitely. The Villages also was closing its cinemas —  the Barnstorm Theatre and the Old Mill Playhouse.

It canceled the farmers markets in the Brownwood neighborhood and other local events, including polo matches.

The Sharon Performing Arts Center already had canceled a show by country star Trisha Yearwood and next week’s performance by Paul Anka.

Meanwhile, the virus prompted Ronald Ballard, retired associate director of the CDC’s Center for Global Health, to spring back into action.

He hoped to coordinate a community response to the virus in the Villages, where the aging population especially was vulnerable. Already he had talked with other would-be participants. Together they hoped to work within the system to support residents in need of care or under self-quarantine.

Their proposal included communications work, delivery of food and medicine and much more.

“The idea being that we have an organization which is community based, right in The Villages, right in the neighborhoods, that will fill the gaps provided,” he said, “because there are going to be gaps, even at the local health level.”

He hoped the group could be part of a coordinated response.